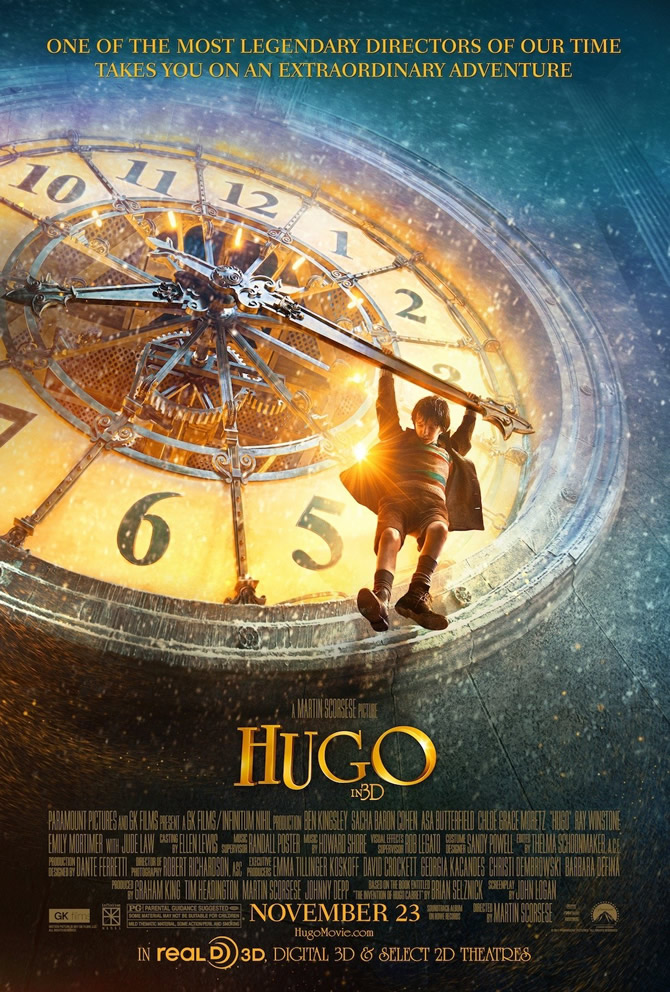 Martin Scorsese makes the sort of gritty, stylized movies that are objectively effective and subjectively unappealing to me and my butterflies-and-rainbows sensibility. I never quite got what was so impressive about The Departed and I’ve never actually seen Goodfellas, but with Hugo, the legendary auteur of gangster grandeur finally broke through to me, making me see what his fans and the general population have been sure of for years, that Scorsese is a truly astounding filmmaker.

The duality of tradition and innovation is what makes the sweet story of an orphaned boy living in a Paris train station kind of brilliant. As the titular curious kid, 14-year-old Asa Butterfield is as soulful a hero as any I’ve seen. The always sublime Chloe Grace Moretz (Kick-Ass; also, kick ass) joins him as a precocious sidekick, a role she’s been perfecting for years until Hollywood finally develops the obsession they will inevitably have with her. The absolutely-will-be-a-massive-movie-star- ness of Moretz, in particular, folds in with Scorsese’s singularly beautiful use of 3D technology to make Hugo very much a film about the future of movie making*. As a rule, I can’t stand 3D; it’s more expensive and headache-inducing without much visual payoff most of the time (Avatar excepted, obviously, which dropped the story ball so dramatically that it surely doesn’t count). But the world of Hugo is so richly layered that the goofy glasses don’t just make the occasional prop look a little closer, they pull you right in to Scorsese’s creation, where you’re surrounded by travellers, buskers and passerby so interesting they could be protagonists themselves. (A particularly wonderful sidestory between Richard Griffiths and Frances de la Tour stole the show for me, though the celebrated actors have only a handful of lines a piece). Hugo, without a doubt, is the first film to ever convince me that 3D might actually be where filmmaking is moving.

Even as Hugo is a clear move towards the future of the industry, it is also a look back as both a period piece and a memory film of sorts. The incomparable Ben Kingsley plays Georges Melies , who in 1930s Paris is no longer the world renowned pioneer of fantastical filmmaker but a lonely, embittered toymaker from whom Hugo’s been stealing parts to rebuild an automaton that used to  belong to his deceased (“oh hey, that’s Jude Law!”) father. As Hugo and Isabelle (Moretz) set about re-invigorating Melies, the film embarks on an awe-inspiring tour through the history of early filmmaking, exploring how Melies’ uncanny imagination opened up every other-worldly possibility available to modern day auteurs, Scorsese among them. 3D technology is a descendant of Melies’ own creations and its superb use in Hugo is as much a tribute to his legacy as the loving ode to filmmaking in the movie’s final act.

The poster for Hugo describes Scorsese as “One of the Most Legendary Directors of Our Time”, a title he earns here by paying tribute to the legends who came before and even, through forward-thinking filmmaking, the ones who will come after.

*The inclusion of boundary-pushing comedian/writer Sacha Baron Cohen as the crippled, lovesick, bumbling and punishing Station Inspector is also a stroke of “where we’re headed” genius mixed with flatout good comic casting.