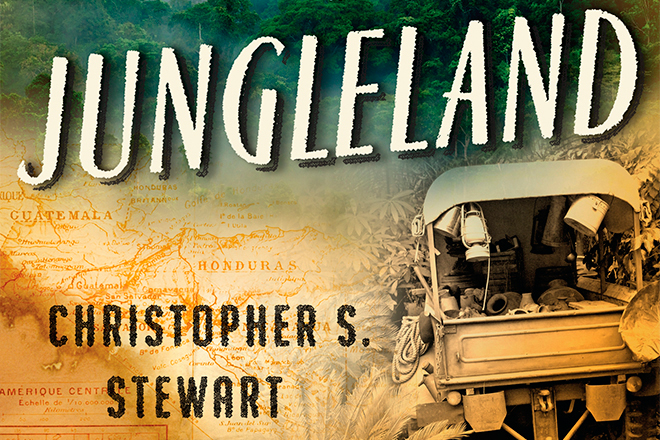 You guys, I did something crazy.

I read a non-fiction book.

This is … new and different for me. I don’t usually read nonfiction if it’s not about infectious diseases. …By which I mean Ebola. Really, pretty much just Ebola.

In middle school and high school my dad got so frustrated with my 100% fiction diet (“Think of all the things you could know, Borah, if you just read a small proportion of nonfiction books. Think of your POTENTIAL!!!”) that he started trying to bribe me to read nonfiction. I kept picking things like biographies of pirates and privateers (because they are AWESOME). For some reason, my dad did not feel that those things should count. Le sigh.

Anyway, that’s a pretty good account of my relationship with non-fiction. Mostly: “No, thank you.”

But recently I’ve been seeing some pretty awesome non-fiction around. The one that I actually picked up and read was Jungleland, by Christopher S. Stewart.

Jungleland is my favorite kind of non-fiction book—when you read the plot summary, it sounds like it has to be made up. Jungleland is about two men questing for the mysterious lost Cuidad Blanca in the rainforest of Honduras. The two men in question are the writer himself, and a WWII spy and explorer, Theodore Morde. Jungleland is part Morde biography, part travel memoir of the writer’s exploration of the jungle, and all awesome.

All right, I mean, the writing is not as amazing as it could have been (I’m just not very fond of passages in which we talk about missing nonfictional spouses/children, etc), but it is clear, and the content is so exciting that it mattered a little less. And when I say the content is exciting I mean, like, there are spy assignments with dissolvable paper. DISSOLVABLE PAPER!!! The Office of Strategic Services (predecessor to the CIA) was weird, yo. So the sections of the book that focus on Morde are full of OSS shenanigans, like dissolving paper, plots to assassinate Hitler (for real), and awesome codenames (ex. Daisy. Again, I am 100% serious). Those sections of the book also track Morde’s own exploration of the jungle, his discovery of the lost city, and his theories on the city’s anthropological implications (including the worship of Monkey Gods).

The other sections of the book are comprised of the writer’s own memoir-esque experiences of researching Morde’s expedition, setting up, and embarking on his own quest into the jungle. These are almost equally engaging (let’s be honest, nothing can compete with OSS shenanigans. NOTHING)—we get interesting tidbits about the political and biological aspects of Honduras, anecdotes about various peoples living in the jungle, and, of course, descriptions of the jungle itself.

If you are interested in spies, lost cities, and/or real-life adventures, you should read Stewart’s Jungleland. It’s fast and fascinating.