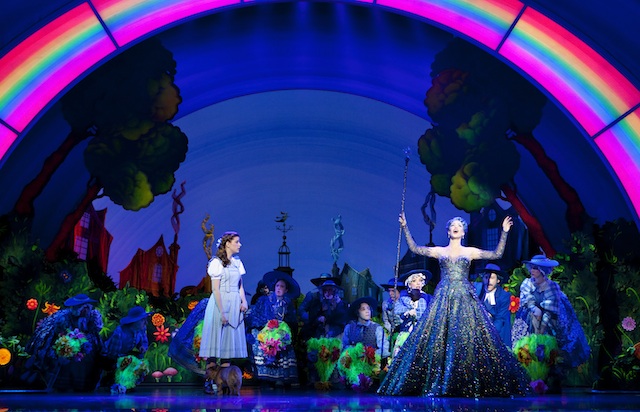 Mirvish’s Wizard of Oz is exactly what all of us mildly jaded theatre-saturated critics thought it was going to be- commercial nonsense. I’m a pretty populist theatre patron- I don’t need everything to be high art (in fact I don’t want it to be); I appreciate comforting, entertaining and linear shows that don’t hurt your head or your heart; and I certainly don’t want the Toronto theatrical landscape to lose its commercial appeal- but I’ve had just about enough of this over-priced lowest-common-denominator nonsense. Theatre is a business, no one is arguing otherwise, but does Toronto’s principal commercial producer need to operate like the artistic equivalent of a Wallmart? At least Wallmart sells their cheap wares at prices worthy of their quality- they make things available to people who couldn’t otherwise afford those things. But at $107 for a decent ticket (even the terrible seats go for a whopping $45), Mirvish is selling this cheap, superficial, derivative silliness for the highest price in town and I’m honestly having trouble stomaching the idea that out-of-town families are saving up their money and making the trip to be greeting by content that doesn’t deserve their effort. What happened to the company that brought us Les Mis and The Lion King and took honest-to-god theatrical risks, even if they didn’t pay off (here’s looking at you, Lord of the Rings: The Musical)? With the exception of bringing in The Book of Mormon national tour later this year, it feels like Mirvish hasn’t done anything for Toronto theatre in years beyond making it seem shallow and financially desperate.

I know I’ve made this argument before, and I honestly do hate to repeat myself, but The Wizard of Oz‘s entire existence reeks of exactly my point. From Andrew Lloyd Webber’s new compositions that are so simplistic and soulless that they made me question whether he had a post-Phantom lobotomy, to the experience of sitting through a post-Wicked portrayal of The Wicked With of the West that plays directly into ideas of ugly villainy so archaic I wanted to scream, there is so little value to this production that everything about it suggest that it’s raison d’être was the reality show that preceded it. Let me clarify that my Wicked With of the West complaint is not about Lisa Horner. She’s a wonderful performer giving the part, as-written, everything she’s got. In fact, most of the cast is pretty good, the ensemble especially (and Larry Mannell is super sweet as Uncle Henry). I even liked Danielle Wade, who won the role of Dorothy on the aforementioned reality show Over the Rainbow on the CBC; her beautiful rendition of “Over the Rainbow” was the one moment in the production when I didn’t wish I was watching (the vastly more musically and emotionally sophisticated) Wicked instead. No one is a bad singer. Everyone is a great dancer. The sets are pretty, the costumes are nice, you never have to worry about things like sound levels or shoddy props in a Mirvish production. There’s a whole lotta competence going on. But, let’s put it this way, when you get to the end of the story and the Wizard claims that things like hearts and brains have been there all along, it just doesn’t ring true.

Once upon a time, The Wizard of Oz was a sweet story about believing in yourself, being who you are, and being content with what you have. But it hasn’t aged well and there’s no magic to the stage version that isn’t easily trumped by the irreplaceable film (which Is timeless, in its own way). Robin Evan Willis is perfectly cast as Glinda (and sports a truly splendid costume), but she doesn’t have anything to say that Billie Burke didn’t in 1939. Jamie McKnight has a beautiful, romantic voice, but how that serves the role of the Scarecrow I don’t know, and I’m almost too mad to mention that Lee McDougall plays the Lion as a “friend of Dorothy”, a joke so lazily offensive that it feels like something a small town grandmother would let slip after one too many gins. Mike Jackson’s stiffly macho (and beautifully deep-voiced) Tin Man is the only performance that comes close to topping the lively interpretations happier Toronto audiences witnessed in Ross Petty’s 2011 Oz-inspired Pantomime. By playing up the tough-guy side of the “heartless” wood chopper, Jackson does what literally no one else in the entire production does- give his iconic character some sort of relatable modern relevance. There’s a modicum of depth to such a man’s struggle to find his emotional, vulnerable, or romantic side (aka one’s “heart”) and thank god for that because other than Arlene Phillips’ entertaining choreography and whatever fascination comes from “ooh, look at all the pretty colours!”, there wasn’t much else to grab on to in this production.

I’m not saying that The Wizard of Oz is a completely intolerable. I supposed if you had unlimited money and time and you’d never seen the classic film or Wicked but you Had seen the reality show and you’re not looking to be particularly moved or provoked in any way  and you’re pretty oldschool in your views on everything from humour to story structure to simplistic portrayals of villainy through ugliness and a good cackle- then I suppose you might enjoy Andrew Lloyd Webber’s “new production” of The Wizard of Oz, packaged beautifully for mass consumption by Mirvish Productions. How there are legitimate theatre artists in this world (starting with Sir Lloyd Webber himself) who put their time and energy into this and came out with such vapidity is unfathomable to me, but how a bottom-line businessman decided it was a good (if terrible) idea, now that I depressingly can picture very clearly. All I ask is that non-Torontonians coming in and seeing this please do try and remember that somewhere deep down there’s more to us than this.