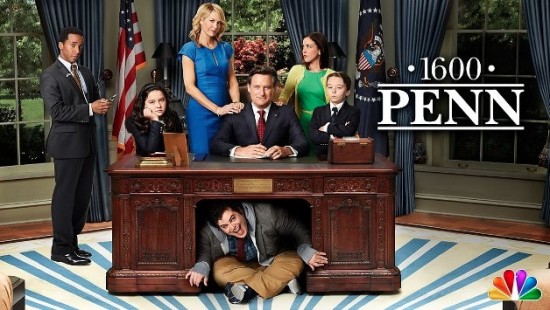 This show is a great idea but- judging just by the pilot- it doesn’t really work. The first family is a great focus. There have been lots of movies and TV shows that featured a similar fictionalized clan to great success. Even the actual first family is plenty engaging to watch with two teenage daughters, a supermom who refuses to suffer fools (or obesity), an actually cool President, a vibrant family history, wacky uncle Biden, and the occasional White House poetry slam. (And family friend Jay-Z: guest star). But I’m not sure the premise works for a sitcom. Even the most interesting of fictional first families strain credibility if they even start to approach sitcom levels of kookiness- that stuff just doesn’t jive with political advisers, PR consultants, campaign managers, the press corps And the secret service around (Emotional damage? Sure. Just plain weirdness? Not so much). Sitcom characters are always at least one of these three things (if not all three): kooky, neurotic, or terrible (as we learned on Veep, where a similar premise went straight for the “terrible” angle while this one takes “kooky”). That’s where the comedy comes from. There are a few exceptions- Jack Donaghy is funny because he’s so grand; Dan Rydell is funny off of sheer wit- but not many and they mostly come on sitcoms that break a lot of form rules. 1600 Penn doesn’t break any rules. It’s as conventionally set up as can be. So it doesn’t contain a shred of truth. (Let me be clear: I’m not saying All conventional sitcoms lack truth- I love conventional sitcoms- I’m saying that one about the first family has to be more inventive than this to sidestep practicality).

I’m all for Bill Pullman as the President of the United States. That was a stroke of casting so smart that it makes me want to rethink how much I didn’t like this show. He’s charming and handsome in that could-get-elected way but also reads as smart and sturdy and someone you wouldn’t mind leading your country. There’s also THIS; that’s actually the main thing. Bill Pullman- greatest fictional President ever (sorry, Bartlett. You didn’t fight aliens). Jenna Elfman is fine as his second wife who’s fighting the “trophy” label and so far I like the so-called-perfect eldest daughter. The fact that the younger daughter is a lesbian? Well that feels like carving comedy out of something that shouldn’t be seen as controversial (seriously, how are we still interested in such things?) but I’m hoping it plays out mostly for the weirdness of her sharing a crush with her little brother and not as much from the political ramifications angle (if Darth Vader, err, Dick Cheney can weather that “storm” without too much fanfare, Bill Pullman shouldn’t even need a full 22 minutes).

But the main problem is the show’s focus, crazy eldest son Skip. Without him, 1600 Penn‘s stories so far could (with some tweaks) play almost as a dramedy. Skip adds the farce. In moderation, a black sheep character with great intentions who just doesn’t fit into the strict behavioral box the first family is expected to live in could be a really interesting thing. In moderation, he could be a standout character not unlike crazy-broad sitcom staples like The Fonz, Barney Stinson (in early seasons), or even Fez. But the crazier the character, the smaller doses he’s needed in. 1600 Penn goes all-in on the Skip factor and therefore wears him out in just the cold open. The character is played (with his typical pathetic enthusiasm) by series co-creator Josh Gad, which likely explains why he’s so overbearing- it’s his show. Sometimes that sort of auteur-driven comedy style works for a show, where the creator puts their style stamp on the show itself then personifies that particular comic point of view in the main character. Seinfeld did it, so did David, Gervais, Fey, McElhenney and Kaling (to varying degrees of success). But, with the exception of Gervais’s David Brent (who we weren’t supposed to like), none of those lead characters are the quirkiest, broadest, wildest characters on screen. In most cases, they’re the (relative) straight man to the Kramers and Tracy Jordans of the world. I like Josh Gad okay- Back to You, Book of Mormon, The Daily Show, his recent New Girl stint- he’s a funny and sympathetic guy. But what all of those projects did was realize that a little Gad goes a long way. If he’s able to take far more of a backseat in future episodes there may still be hope for 1600 Penn (but I wouldn’t count on it).