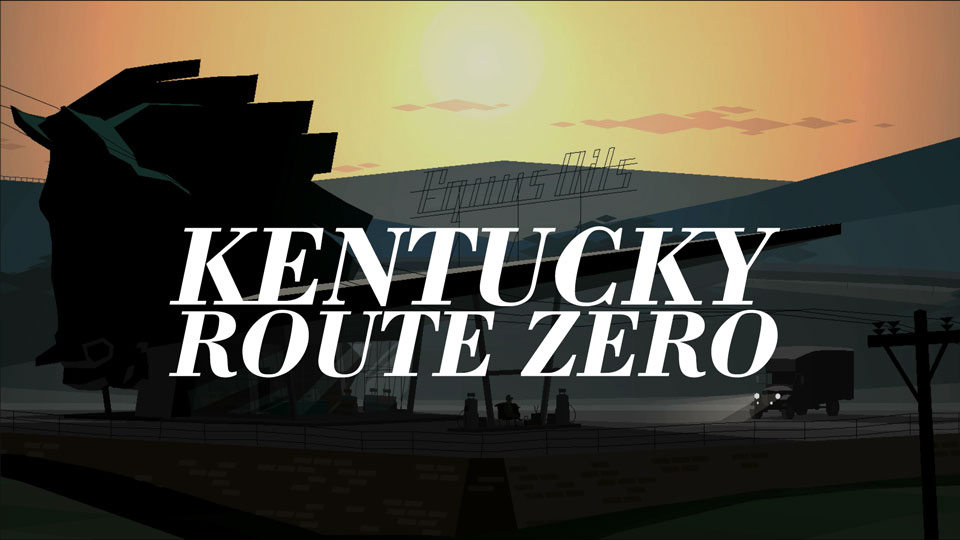 It’s a muggy summer night in Kentucky. The darkened farmhouse on the hill recedes into the blackness, and while hurrying down the gravel path to the road below, the sounds of singing frogs and hooting owls are slowly drowned out by a bluegrass band playing on the porch of a nearby farm. I stop for a moment beneath the lone streetlamp, contemplating the music and the surroundings, before eventually getting back in the beat-up delivery truck. With my equally beat-up dog Homer by my side, we once again set off into the night. No, this isn’t the memoir of some Southern luminary, it’s just one part of the altogether unique experience that is Kentucky Route Zero.

To back up a bit, at the most basic level, Kentucky Route Zero is a point and click adventure game. The game will eventually consist of five acts released episodically, and the first of these has just recently come out. Individual episodes are available for $7 USD, or you can purchase all five acts in advance for $25.

Beyond the throwback trappings of the adventure genre, Kentucky Route Zero becomes something completely different. It’s perhaps the most literary game I’ve ever played, and the impact of the first act definitely feels more like that of the beginning of a good novel than a computer game. Part of this is the way the game treats dialogue. Instead of the traditional adventure format, where you can repeat conversations and dialogue trees ad nauseum, Kentucky Route Zero forces you to chose one option with no going back. This lends everything a very natural feel, without all the self-aware gaminess that you normally expect.

The dialogue system is also interesting in that it lets you decide upon the backstory of some of the characters for yourself. The only details of the protagonist that are set in stone are the fact that he’s named Conway and that he delivers antiques for a struggling Kentucky store. Otherwise, your dialogue choices help shape who Conway is, both within the world of the game and within your own mind.

The game begins with Conway stopping at a gas station to get directions for a delivery. The attendant doesn’t know exactly where it is, but he tells you that you can get there on the Zero, a mysterious highway that isn’t marked on any map. It’s late in the evening, and as the sun sets, the game becomes a world of darkness, with only occasional splashes of colour. The graphics are very simple, but somehow quite beautiful at the same time, and, along with the terrific sound design, help lend the game its atmosphere.

The game makes rural Kentucky seem like a strangely magical and incomprehensible place. At one point, I stumbled across an odd museum by the side of the road. It was unclear what it was dedicated to or what any of the exhibits made (and, in fact, doesn’t appear to have anything to do with the plot of the game at this point), but I still spent the time to explore it. Moments like this one make you feel like you’re just passing through a slice of the world that’s old and lived-in. The developers say that the game is a ghost story in a sense, and you can certainly feel that as you explore, like you’re in a place the rest of the world forgot about, the kind of setting you’d expect to find in a Neil Gaiman novel.

What’s truly impressive about the first act of Kentucky Route Zero is that it left this kind of impact on me despite only taking an hour or two to play through. It’s slow-paced, and raises many more questions than it answers, but does an incredible job of establishing its world and characters. There’s a part of me that badly wants to play through it again, but there’s another part that desperately insists I should leave my first playthrough alone, that a second trip through Kentucky’s byways can’t possible match the unique experience of the first. Either way, the game lingers in my mind; if I’d made this choice instead of that choice, how would it have been different?

In the end, all I can say for sure is that Kentucky Route Zero is something new and different, despite the familiar mechanics. Games are just entering an era in which they demand to be taken seriously, alongside their cousins in film, literature, and theatre, and Kentucky Route Zero feels like a step closer to their level. If the other four acts even come close to achieving what the first act did, then this will be a game for the ages. And even if they don’t, the first act deserves to be experienced for its rich world, deep characters, and incredible atmosphere.