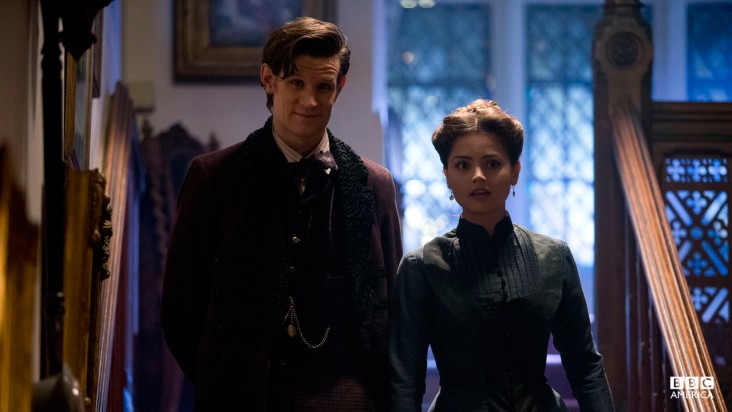 Merry Christmas, Whovians! In this year’s Christmas special ‘The Snowmen’, we got a brand new companion.

Jenna Louise Coleman technically made her debut in the fall as the soufflé baking genius Oswin Oswald in ‘Asylum of the Daleks’. Oswin was actually a Dalek, and died at the end of the episode. Which is why it’s confusing she’s back. This episode didn’t clear anything up. Here’s a recap to get you up to speed.

England, 1842. A little boy makes a snowman. He doesn’t want to play with the other children- they’re silly. The snowman agrees with him. 50 years later, and the little boy has grown up into a sketchy looking man named Doctor Simeon, who has an equally sketchy lab. In the center of said lab is a giant machine filled with swirling snow.  Simeon assures the snow that he will help it.

At a pub, Clara (Jenna Louise Coleman) works as a waitress. In an alley, she notices a snowman that wasn’t there a moment ago. She asks a passerby if he made it. The passerby is the Doctor. He seems interested in Clara and the snowman, but leaves anyway. Clara follows him.

Simeon visits a house owned by Captain Latimer. He is interested in a pond where a governess died the year before. She fell in, and was trapped under the ice for days. Simeon says ice remembers before leaving.

Madame Vastra and Jenny confront Simeon about the snow (Remember them from ‘A Good Man Goes to War’? They were the Victorian interspecies lesbian detectives, in case you forgot). Simeon says it will be the last winter, but there is nothing they can do to stop it.

Also back from ‘A Good Man Goes to War’ is Strax. (He died though? They mention that, and that he was brought back to life, but didn’t really get into it. It’s Doctor Who though, so I’m not going to nitpick logic).  He wants to investigate, and is frustrated with the Doctor’s current apathy- a result of him losing the Ponds in the last episode. The Doctor intends to use a memory worm on Clara, which will erase the last hour from her mind. She notices several snowmen have popped up out of nowhere. The Doctor tells her to stop thinking about the snowmen- they feed on her thoughts. When that doesn’t work, he tells her to think about them melting. The snowmen melt, and they are safe- for now.

The Doctor tells Clara to stay away, and to forget him. She instead follows him, up a ladder that appeared from nowhere, and up a ladder that goes all the way into the clouds. On top of one of those clouds is the TARDIS. Clara retreats back down the staircase.

The next day, Clara goes leaves the pub, and goes back to a job as a governess at Captain Latimer’s house, where she is known as “Ms. Montague”. One of her charges, Francesca has been having nightmares about her former governess who drowned in the ice. She dreams the governess comes back to get her. Clara looks for the Doctor to help. She instead runs into Jenny and Madame Vastra. Clara passes Vastra’s interrogation, and Vastra calls the Doctor.

The Doctor pays Simeon a visit in his lab. He Doctor figures that the snow can mimic what it sees. He calls the snow “the intelligence”. It needs a human body in ice form so it can evolve. The Doctor goes to Latimer’s house to inspect the pond.

Clara tucks Francesca and her brother into bed when an ice woman in the form of their old governess bursts in. The Doctor melts the ice woman in the nick of time, but she comes back, and has learned how to avoid melting.

The Latimer family, the Doctor, Clara, Strax, Jenny and Vastra barricade themselves downstairs. The Doctor says the ice woman is a fusion of snow and humanity. She’s a blueprint for what the snow wants to become. If it gets her, it will create an army, and destroy the world.

Simeon demands they release the ice woman to him. Clara and the Doctor go to the roof, and up the staircase into the clouds, followed by the ice woman. Clara goes into the TARDIS for the first time. (They got a new interior. I’m not a fan). Clara asks if there’s a kitchen in the TARDIS- she likes making soufflés. The Doctor finally gets excited about saving the world again. The ice woman chooses this moment to snatch Clara out of the TARDIS. They plummet to the ground.

Clara is taken back into the Latimer’s house. Even though her injuries are severe (She fell from a cloud. I know Strax is using advanced alien technology on her, but how is she not dead?), the Doctor is confident Clara will live.

The Doctor and Vastra meets Simeon back in his office. The Doctor says the intelligence is a result of Simeon pouring his darkest childhood dreams into the snow, which is a carnivorous parasite. He uses the memory slug from earlier to erase Simeon’s entire adult life, reasoning that the snow will have nothing left to mimic. The intelligence says it’s not that easy, and takes over Simeon’s body, which proceeds to strangle/freeze the Doctor.

At the Latimer house, Clara takes a turn for the worse. The entire family cries. The snow turns to rain and starts to lose power. The rain is actually tears. The Doctor says the only force that could drown out the snow is an entire family crying on Christmas Eve.  The snow/intelligence is now powerless. The Doctor looks at Simeon’s business card before leaving. It says “The Great Intelligence”, which seems familiar to him.

The Doctor returns to Clara. She says, “Run, you clever boy. And remember,” before dying. He is disturbed, as those were Oswin’s last words to him too.

The Doctor realizes Clara and soufflé girl (Oswin) were the same woman, who died twice. (He never actually saw Oswin’s face). The Doctor, Jenny and Vastra visit Clara’s grave which reads ‘Clara Oswin Oswald’. He leaves Jenny and Vastra, and says he is going to find Clara.

In the unspecified future- it looks like present day- Jenna Louise Coleman (I’m not going to try to guess the name of her character) walks by Clara’s grave.

….What? Despite the head-scratching ending, I enjoyed this episode. I didn’t like the way they solved the crisis- a family crying on Christmas Eve was the only thing strong enough to save the world felt a little cheesy. But it’s Christmas, it’s Doctor Who, and ultimately, the crisis wasn’t the most interesting part of the episode: the characters were.

It was great to see Jenny, Madame Vastra and Strax back. In a show as big as Doctor Who, having a few recurring characters who are friends of the Doctor, but aren’t companions adds richness and depth. Not to mention Strax provided some great comedic relief.

Jenna Louise Coleman continues to shine as the mysterious new companion. I liked her in her debut earlier this season, and she didn’t disappoint in her return. The show indicated Clara and Oswin are the same person, but this is Doctor Who. There’s probably more to it than that. At least the characterization is the same. She’s intelligent, confident, witty, brave and flirtatious. As long as whoever Coleman is playing has the personality and continues to have amazing chemistry with Matt Smith, I can’t wait to see what adventures she has next.  (No. Seriously. I can’t wait. Is there an official air date yet?)

I liked that instead of the usual “It’s bigger on the inside” comment regarding the TARDIS, Clara said, “It’s smaller on the outside”.

I liked the many Sherlock Holmes references in this episode. It’d be fantastic if Steven Moffat (who writes on both Doctor Who and Sherlock) would give us season 3 of Sherlock, but I’ll take what I can get.

Come on guys. You can’t say “Winter is coming” more times in a Doctor Who episode than they do in a Game of Thrones episode.

Apparently the Great Intelligence is a monster from Classic Who? And the Doctor implied it could come back. Will it?