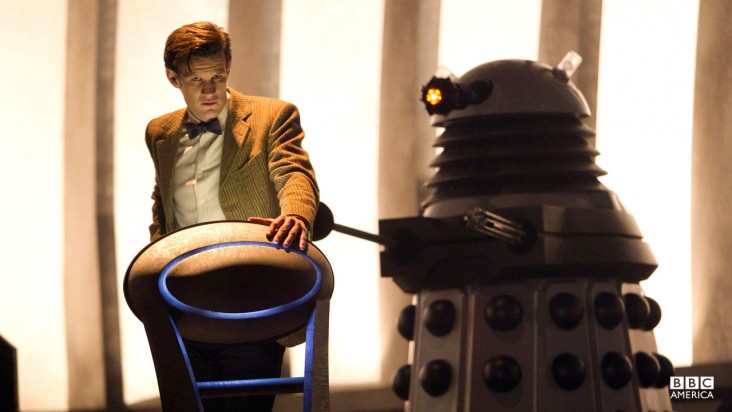 Doctor Who is Back…

… and as weird and wonderful as ever.

We open with a mysterious woman asking the Doctor for help: the Daleks have her daughter. The woman claims to have escaped, but the Doctor has another theory- the woman is a trap. She confirms this when a Dalek eyestalk grows out of her forehead and a Dalek shooter comes out of her hand. She’s a Dalek that took over a human body. A human/Dalek, which I will now call a Halek.

Back on Earth, Amy signs divorce papers. (Wait, WHAT?!). But Amy and Rory have to put marital problems aside as they are both captured by Haleks.  Rory and Amy are joined by the Doctor in a spaceship the Doctor calls the Dalek’s Parliament. The former Mr. and Mrs. Pond and the Doctor are ushered into a room full of Daleks. The Doctor expects death, but the Daleks unexpectedly say, “Save us.”

Cue the intro. Oh no! They changed it. There’s more colors and effects and stuff. Why?

We see a woman locking herself in her living quarters. There are several interesting things about this. One, the girl is blasting Bizet’s Carmen and cooking soufflé when there are Daleks right outside. Two, soufflé girl is played by Jenna Louise Coleman, aka the Doctor’s future companion. Who wasn’t supposed to make her debut until the Christmas special. (Kudos to the DW team for keeping that secret.

At the Parliament, the Doctor questions the Halek from the first scene. She still has human memories that can be reactivated to help her cover story, but she clearly doesn’t have any of her original human emotions. The Daleks tell the Doctor about the Asylum of the Daleks. It’s a dumping ground for Daleks gone wrong- crazy, extra angry Daleks that even regular Daleks are afraid of. The Daleks want to blow it up, but there’s a force field protecting it. The force field can only be turned off from inside the Asylum. The Daleks want to send the Doctor, Amy and Rory to the planet so they can turn off said force field.

Soufflé girl comes over the intercom. Her name is Oswin, and she tells the Doctor she has been stranded on the planet for over a year. The Doctor is intrigued by the soufflés-where does she get milk?- but the Daleks aren’t interested in baked goods. They give the Doctor and the Ponds bracelets that will protect them from nanogens on the Asylum, then teleport the trio to the planet below.

During the teleportation, Rory is separated from the group, and falls down a hole, into a room filled with dormant Daleks. The Doctor and Amy meet a man named Harvey and go with him to his escape pod. They see Harvey’s dead crew. Harvey transforms into a Halek and attacks. They escape to another room, filled with corpses. The Doctor explains that the nanogens will turn anyone, dead or alive into a Dalek. Right on cue, the corpses turn into Haleks. Zombie Haleks. Zohaleks!

The Daleks surrounding Rory wake up. Just as they’re about to exterminate him, Oswin guides Rory to safety over the intercom. She hacked into the Dalek computer system and is using her mad computer skills to save the Doctor and the Ponds.

Meanwhile, the Zohaleks managed to take Amy’s anti-nanogen bracelet, meaning she is susceptible to being Dalek-ified. Rory is reunited with Amy and the Doctor. The Doctor and Oswin hatch a plan. The Doctor and the Ponds are standing on a teleport. Oswin will lift the force field and the Doctor will come get her. Then the four of them will teleport back to the Parliament.

Amy slaps Rory when he says that he loves her more than she loves him. Amy says she kicked Rory out because she knows Rory wants to have kids, and she can’t have any. She was giving him up so he could be happy. Rory tries to give Amy his anti-nanogen bracelet to buy her more time, but sees she already has one. The Doctor gave Amy his bracelet without her realizing, to trick the Ponds into talking out their problems.

The Doctor continues his journey to Oswin, and is surrounded by Daleks. Owsin hacks into the Dalek system and erases the Doctor from their memory. They leave him alone. The Doctor finally reaches Oswin. She tells him to come into her room, but he says he can’t. She doesn’t have a room- her entire apartment was a dream. She is actually a Dalek.

The Doctor figures that when the Daleks recognized her genius and turned her into a fully-fledged Dalek. Unable to cope with this, Oswin dreamt up another reality for herself. Oswin moves to attack the Doctor, but stops before she actually hurts him. She tells him to run. As he leaves, she says she is a human and tells the Doctor to remember her.

Overall, this was a really strong episode. I was wary of this season when the producers said they were trying to make each episode bigger. I was worried they would sacrifice strong characters for epicness. This episode shows you can have both.

The Daleks’ new ability to hijack a human body and destroy the human aspects of a someone’s personality- love, kindness- was creepy. It was also a great way to keep the Daleks fresh, decades after they were initially introduced to Who.

My one big problem with this episode was the fight between Amy and Rory. There were some good ingredients for a believable conflict: The revelation that Amy can’t have any more kids after being kidnapped last season was wretching. I appreciated the writers showing how past events still have repercussions. I also liked how what I consider the Pond’s Achilles’ heel came up again: Rory’s belief that Amy is too good for him, and he loves her more than she can love him, and Amy’s frustrations with that.

That being said, the fight went too far. Amy signed divorce papers. The Ponds are technically divorced. But why? At the end of the episode, Rory appears to move back in with Amy. Why was necessary to have the Ponds officially end their marriage, if things are seemingly resolved within the same episode? Hopefully it’s part of a bigger picture I don’t know about yet, or else what was the point? I also take issue with the implication that all it takes to fix the Ponds’ marriage is the Doctor tricking them into talking out their problems. It sounded like Amy decided Rory wouldn’t be happy if she couldn’t give birth to any more children and decided to end the marriage without talking it out, even though they were both miserable. Amy and Rory are adults who should be able to talk about their problems, not be manipulated into doing so their friend.

On the plus side, Jenna Louise Coleman’s unexpected introduction was a pleasant surprise. Oswin was smart, funny, flirty and adorable. Seriously, I want to hang out with her, and listen to music and bake soufflés. While I’ll miss Amy and Rory when they leave, Coleman’s amazing chemistry with Matt Smith is something to look forward to in post-Pond show.

Oswin’s introduction does raise the question: how is Coleman coming back? Oswin presumably died at the end when the Asylum blew up. Even if Oswin survived, she would have to be un-Dalekified, because if the Doctor had a Dalek companion, that would be all kinds of awkward. My theory is that whoever Coleman is playing in the Christmas episode must be an ancestor, or some relative of Oswin. I have to wait until Christmas to find out.

Tune in next week when we discover what the cryptically titled ‘Dinosaurs on a Spaceship’ is about.