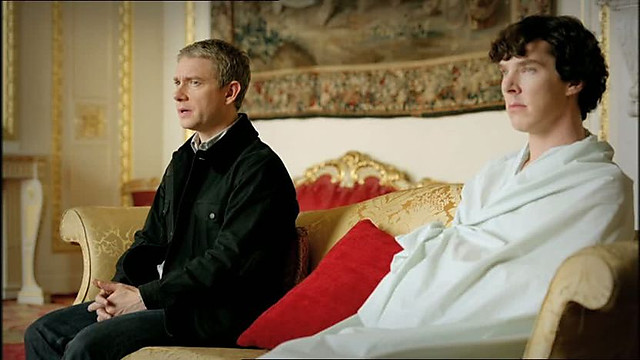 Sherlock and the Woman

Sherlock’s back in the US! After Peter’s awesome review of Series 2, everyone is excited, right? Here is a spoiler-heavy recap of “Scandal in Belgravia”.

We pick up right where we left Series 1. Our heroes Sherlock and John are in a showdown with Moriarty. It’s a tense face off, when suddenly the Bee Gees start playing. Moriarty’s cell phone went off, and yes, his ring tone is Staying Alive. Moriarty takes his call and leaves. “Sorry, wrong day to die.” After months and months of speculating of how Sherlock and John get out of that one a live….a phone call? Really? It’s brilliant, because it’s so obvious, but no one I know thought of it before hand. Well played, writers, well played.

Back at 221B Baker Street, Sherlock listens to potential clients, and dismisses them all as too boring. Eventually he gets a case and sends John to the crime scene armed with a web cam. Sherlock views the evidence from the comfort of his flat: a car backfired, and a nearby hiker died from blunt force trauma to the back of his head.

Sherock and John in Buckingham Palace. Sherlock decided not to put on pants.

Sherlock goes to Irene’s, where she is waiting for him. Completely naked. This not only makes John extremely uncomfortable, but renders Sherlock unable to deduce anything about Irene. While Irene flirts with Sherlock, and asks about his hiker case, John goes in the hallway and sets off the fire alarm. Irene instinctively looks to the hiding place of her phone- a safe behind a mirror.

Before Sherlock can guess the combination, CIA agents burst in, demanding Sherlock open the safe. Sherlock manages to figure out the combination (Irene’s measurements). The safe is booby trapped, and it’s just the distraction Sherlock and Irene need to incapacitate the CIA agents. The involvement of Americans has Sherlock intrigued. He guesses that the phone has more than just compromising photos of royals. Irene knocks Sherlock out, and escapes with her phone.

While Sherlock is unconscious, he dreams about Irene. She solves the hiker crime- the hiker was distracted by the car backfiring, hit with his own boomerang and killed. Irene also returns Sherlock’s coat. When Sherlock wakes up, John assures Sherlock Irene wasn’t there. Then Sherlock notices his coat. And his cell phone, which Irene has programmed to make an orgasm sound whenever she texts him, which she does, frequently.

Several months pass. It’s Christmas, and Sherlock finds Irene’s camera phone on hi s mantle, gift wrapped. Sherlock thinks this means Irene is dead, because she told him camera phone was her life. He and Mycroft identify her body at the morgue. Sherlock tries to guess the code to unlock Irene’s phone but isn’t successful.

A couple days later, John is taken to an abandoned building where he expects Mycroft. Instead he finds Irene. Surprise, she’s not dead! She wants John’s help retrieving her phone, but John refuses and tells Irene to tell Sherlock she’s alive.  She texts Sherlock and they hear Sherlock’s ringtone go off just outside the room. He heard the whole thing.

Irene shows up at 221B Baker Street. She opens her phone and shows Sherlock an email on her phone containing a code. Sherlock realizes it is a seating arrangement for an airplane, and even works out what flight the email refers to. Irene secretly texts Moriarty this information.

Later that night, Sherlock tells Irene about Coventry in World War II. The Allies knew the Germans were going to bomb it after deciphering a German code. They let Coventry be bombed so the Germans wouldn’t know the Allies were onto them. Sherlock thinks the plane is going to be a similar situation to Coventry. Irene flirts some more with Sherlock and he responds by holding her hand/wrist. But the flirting comes to an end when Mycroft sends for Sherlock.

Mycroft explains that a terrorist cell was planning on blowing up an airplane. Mycroft and the American agents had arranged for a plane to be filled with passengers who were already dead, to fool the terrorists, and save innocent lives. However, since Irene texted Moriarty, this plan has been ruined. A smug Irene shows up. She has a list of demands in exchange for her not releasing any more information.

Mycroft is about to give in to Irene, but Sherlock stops him. Sherlock tells Irene he knows the code to her phone. She got carried away with the game, and let her feelings for him cloud her judgment. Irene scoffs that she never had any feelings for Sherlock, and was just playing him. Sherlock tells her he took her pulse when he held her wrist earlier, and knows she is lying. He solves the code to her phone: I am SHERlocked. Irene asks the Holmes brothers for protection, but is coldly turned down.

Several months later, Mycroft tells John that Irene is dead. She was captured by a terrorist cell and beheaded. Mycroft and John agree to tell Sherlock Irene is in the Witness Protection Program in America. Sherlock accepts this calmly, but asks to keep Irene’s phone. As he looks at it, there is a flashback, revealing Sherlock found Irene and saved her.

Why do modern adaptations always make Irene a baddie? She wasn’t in the original stories, nor did she have anything to do with Moriarty. Just a slight complaint.

Sherlock using a deerstalker to hide from the press was also hilarious.

This episode had so many quoteable quotes. You are correct, Irene: “Brainy is the new sexy.”

Sherlock played the violin more in this episode than probably in the entire first series combined. It was fabulous!

This episode did a fantastic job of showing Sherlock’s relationship not only with John with the other characters. There were great brother scenes with Mycroft. And Sherlock defended Mrs. Hudson more than once. And he was rude to Molly, but then apologized. He apologized. John is clearly rubbing off on Sherlock and humanizing him.