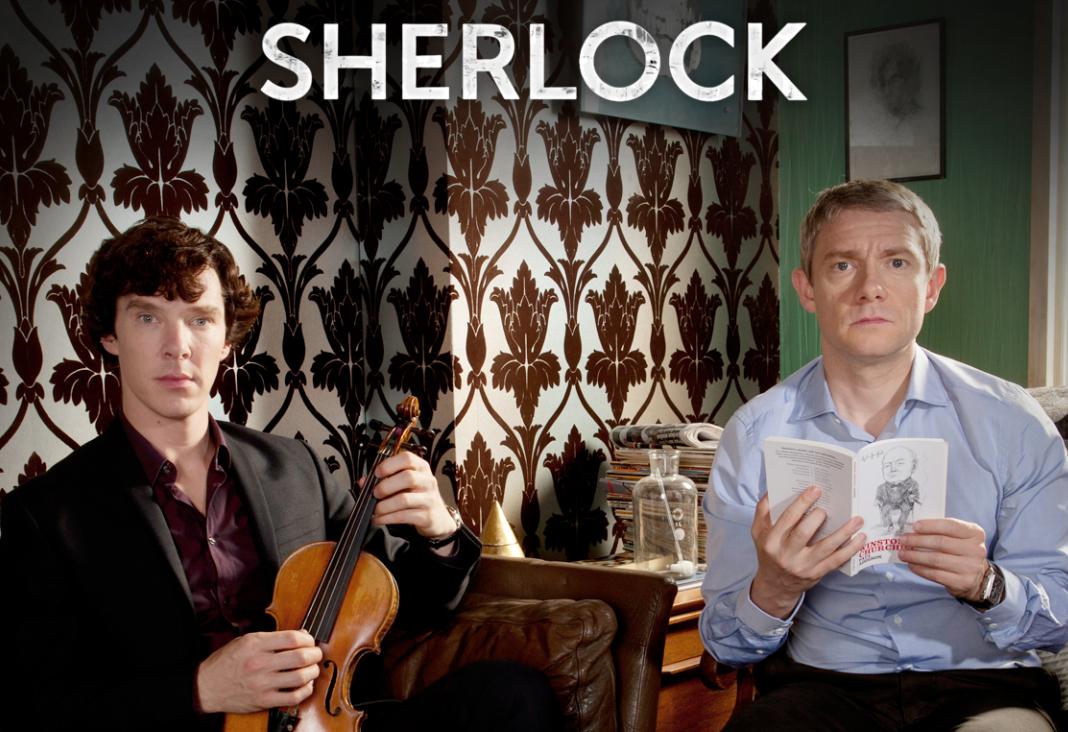 For fans of Sherlock who do not subscribe to any BBC specialty channels, this Sunday has been a very, very long wait.

Series two of the amazing modern update of Sir Conan Authur Doyle’s sleuth returns to PBS Masterpiece Theatre on Sunday May 6th, and the public channel will air the three 90 minute episodes every Sunday for the first three Sundays of May consecutively, just as BBC One did last January starting on New Years Day. Having already viewed series two on the previously mentioned specialty channels, I can tell fans of Sherlock who are eagerly awaiting its debut on PBS that your wait will be well rewarded with what I honestly believe is the best show I’ve seen on the tube so far in 2012. Fans of series one are in for a great treat this month as they are about to watch three amazing episodes, right up to the thrilling and mysterious conclusion. And unlike the previous season, series two actually tackles some of the most popular stories written about the super intelligent sleuth:

On May 6th, the second series starts with “A Scandal In Belgravia”; a modern story loosely based on “A Scandal In Bohemnia”, which introduces us to one of Sherlock’s most challenging foes, the stunning Irene Adler. Written by the show’s creator Steven Moffat (who also plays Sherlock’s brother) and directed by Paul McGuigan, the story begins where we left off in season one, the standoff with Moriarty, and then quickly moves on to the new story, which is exciting and unpredictable. The role of Irene Adler is played deliciously by Lara Pulver, she not only holds her own as the complex character but at times steals scenes from Holmes and Watson. You will find her and the story intriguing and very playful.

The first episode sets a very high bar, as the mystery is complex and has you guessing right until the very end. Even the most useless moments all tie up in the end, leaving nothing untouched. Stealing the show mostly was Pulver’s stunningly sexy performance as Adler. She is able to do something that no villain in this series was able to do and throw Holmes off his game, get him to even question himself for just a moment. It was that pause that gives us a glimpse of the compassion and humanity that Holmes is capable of showing. To watch them joust on the screen is like watching two people in a mental kung fu battle where each move is countered over and over and over again until someone makes a mistake. You stay glued to the television, afraid to turn away out of fear you’ll miss that one detail that opens your eyes to what’s going on. Quite a fitting opening salvo for the episodes that are to follow in the coming weeks.

The next week, on May 13th, fans will be able to enjoy a movie based on what was my favourite Sherlock Holmes tale; “The Hounds of the Baskervilles”. This retelling takes place in a small town that is accused of doing illegal testing in the area and its township. While the episode does offer familiar qualities one would expect from the popular novel, it’s still delivered without hurting the elements that make this series so popular. It’s a very character-driven episode, and you learn a great deal about each character in this stunning thriller.

What I liked most about this episode is that it presents us with a supernatural element that’s unexpected, and it’s interesting to watch the principal characters respond to it. Just the revelation of something this weird manages to bring out something in Holmes and Watson we don’t expect, and it makes for very entertaining television. All “Hounds” does is present the kind of madness that the show is capable of doing before finally sending us all right over the edge.

The series will then come to a dramatic and shocking end on May 20th with “The Reichenback Fall”, an episode that finally pits Holmes against Jim Moriarty, the standoff we’ve all been waiting for. In this thrilling and epic final episode of series two, Holmes and Moriarty focus on ‘The Final Problem’, the same title of Doyle’s infamous final book. The script of the finale is penned brilliantly by Steve Thompson, who brought us last series’s ‘Blind Banker’. Without spoiling a single thing, this episode will shock many viewers and leave them in awe, and likely make them spend the next year trying to figure out what happened.

Last series, I was a little iffy about the character of Moriarty, but after series two I am super impressed with the disposition of the super villain and the exceptional actor who brings him to the small screen. Jim Moriarty, brilliantly portrayed by Andrew Scott, is more advanced and sinister the closer we get to the end of series two, with some of the best acting I’ve seen on television from a villain in a long time. This caps off a great series with a stunning finish that leaves you wanting so much more. But we’ll have to wait until next year, or perhaps even longer until all is revealed.

If you’re a fan of series one, the second will not disappoint. It’s more advanced, more gutsy and takes on some of the best works Doyle ever wrote about his super sleuth. Series two doesn’t fail to bring the goods and I am very confident that viewers on PBS are in for a great month as they enjoy each episode like so many fans did last January. Enjoy the series and then stand in line with the rest of us as we continue to eagerly wait for the release of series three, which has already been approved by the BBC. That’s a good thing because, in my humble opinion, Sherlock is the best show on the tube right now and I’m dying to see more. Watch these three amazing episodes and find out that, like the character, Sherlock has no equal.