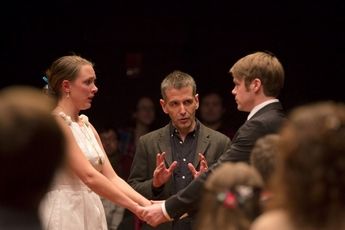 Not the Town I Remember, or the Town You Forget

I’m going to be in the minority; I don’t like it. I had a tough time sitting down to write this review because I was uncertain how to articulate exactly how I felt walking out of the Huntington Theatre Company’s Our Town a few weeks ago. This iconic show is magical and dazzling. In my defense  I was not the show’s biggest fan from an early age, mocking its simplicity, its awkward staging (honestly, who can mime churning butter and deliver anything remotely worthy of a character—Melinda Lopez and Stacy Fisher, that’s who), and its dated relevance. Fortunately, I revisited the play shortly after graduating high school and I found new depth, new character, and new charm. And I thought I was done with the play until I was called upon in my middle age to play Dr. Gibbs in a community theatre production.

But I couldn’t resist the star-studded production by the Huntington Theatre Company in Boston. Here, local audiences were given a treat of a performance worthy of a Broadway stage. They cleverly chose to stage this production in the Calderwood Pavilion at the Boston Center for the Arts. The stage is a masterpiece of design. I mocked the staging in my head when I heard that it was simply audience on three sides and a couple of tables. Stephen Dobay’s scenic design is pure conceptual genius. With director David Cromer, Dobay seizes every last bit of life and space within this intimate setting, bringing the action into our faces and onto our feet (watch your feet!). Two contrasting tables with a minimal number of chairs set the scene for our two houses. And they play the scenes without the added dimension of a proscenium arch.

This production is all David Cromer’s product. He has woven his masterful interpretation into each character and production element. He is clever, sharp, and focused in his directing. I loved that he also played the Stage Manager, an iconic narrator of our unforgettable journey into Grover’s Corners, NH. Cromer’s performance is award-winning. He is breathtaking, brusque, purposeful, and (almost) endearing in this role. He manages to take a dry expository role and turn it into a character as memorable as the lives of the citizens of Grover’s Corners. His use of a pen and legal pad is truly an actor’s dream with each point and brush an artful motion conveying his purpose and intent (Yes, I just got all Meiser on you). I loved the way he continued to command the scenes, telling the audience when we’d seen enough, and, sometimes, struggling to maintain control as our Master of Ceremony, when the characters yearned to tell the audience a bit more about the magic and life in Grover’s Corners. Cromer made the show magical, a true actor’s treat, but I also appreciated on multiple levels the amount of directing involved in the Stage Manager.

But I will always be about the love story. I know that’s not the focus of Our Town, but I think we can get multiple things from this classic story. For me, it’s all about the changing chemistry between Emily Webb and George Gibbs. I can’t say I was too disappointed. I was shocked at first that George Gibbs, played by Derrick Trumbly, was so old. I know he has to span from young adolescence to adulthood, but I felt cheated from a little bit of the youthfulness of the character. He is very good in the later scenes, capturing the tenderness and earnestness of George Gibbs the man. Most of his scenes with Therese Plaehn’s Emily Webb were magical. These are the scenes for which I live. Plaehn is subtly brilliant in her role as Emily Webb, shy, smart, and sharp. I’d like to return to Plaehn and Trumbly later for Act III.

The supporting citizens of Grover’s Corners, especially the Webb and Gibbs families, are outstanding. Craig Mathers as Dr. Gibbs is wonderful as the conflicted, hypocritical but endearing doctor and patriarch. Equally clever and star quality was Stacy Fischer as Mrs. Webb. From every motion to every eyebrow raised, Fischer delivers a subtly commanding performance. Emily Skeggs’ turn as Rebecca Gibbs was understated and brilliant; I truly believed her tender moments with her brother, Trumbly’s George. I love when sibling relationships work, especially for brother-sister relationships. I thought Christopher Tarjan’s Mr. Webb was good, never breaking into outstanding but he delivers some solid moments with Trumbly’s George and tender support for Plaehn’s Emily. I was disheartened to dislike Melinda Lopez as Mrs. Gibbs. With some of the more substantial material, and excellent scenes in Act III, she was a little too no-nonsense, a little too aloof in the prior Acts, to truly differentiate her change in Act III.

And it’s Act III that gives me pause. In Act I, I choked up; in Act II, I fought back tears; but Act III, the quintessential Act, I struggled to stay awake. Yes, I was bored by this production’s Act III. I appreciated Cromer’s hard work and his true innovative interpretation of this timeless play. Like other reviews, I won’t give away Cromer’s magic. I want to leave that surprise and beauty for future audiences to appreciate. From a director’s standpoint, I get it and I even cherish it. Cromer has taken a story that we all thought we knew and turned it into something new and meaningful in today’s age. From an eager audience member’s view, I wanted what I expected to see. I wanted to cherish Plaehn’s words, Lopez’s messages, and the last essential drops of Thornton Wilder’s treasure. I was distracted; I was pulled out of the story and into my own head, and now I want those precious moments back. I know I’m in the minority. I saw other audience members struggle to regain composure when they left the theatre, and I saw others whispering (or talking loudly) about the genius behind this production. I won’t argue against them, but I will say that I longed for something less. Less is more. When these actors could emote and cherish each moment in some of the more mundane scenes in Act I and II, I expected an Act III to make me into a whimpering mess. But don’t let my preconceived notions of this classic distract you from enjoying what is otherwise a stand-out production of the season. The Huntington has truly outdone itself with every actor fully committed, whether two minutes or two hours onstage. Grover’s Corners never looked so good, and I long to go back.

Catch David Cromer’s clever re-imagining and interpretation of Thornton Wilder’s Our Town at the Calderwood Pavilion at the Boston Center for the Arts from now until January 26, 2013 (an extended run). You won’t regret reliving this magic.