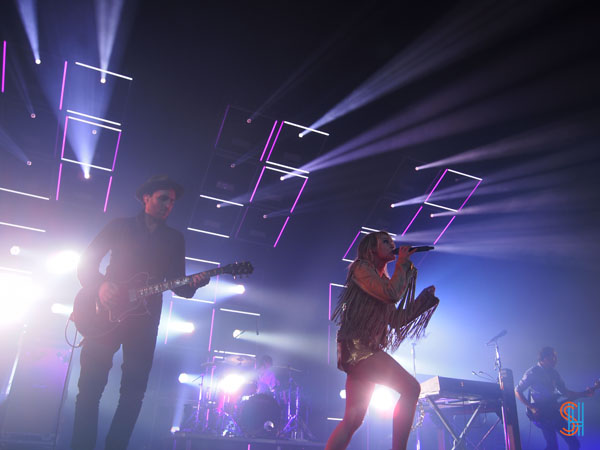 It was a brisk, sunlit afternoon and I was walking along Queen West, headed into the city to meet a friend for dinner.  As I passed the south gates of Trinity Bellwoods, I pulled out my phone and absentmindedly flipped over to my Instagram feed like the modern, connected fellow I am.  There, I saw the following post:

“Toronto!  The first pair of tickets are here!”

During their recent Canadian tour, Toronto indie mainstay Metric had been regularly depositing simple white envelopes on landmarks of various cities, then photographing them and sending their fans on a treasure hunt for free passes.  The photo accompanying this most recent post showed one of these selfsame envelopes affixed to what looked suspiciously like the south gates of Trinity Bellwoods.  I turned slowly on my heel and retraced my steps almost suspiciously (I hadn’t yet left the block); and there it was, in plain sight for the world to see.  I ripped the paper from the wrought iron and resumed my course, scarcely able to believe my luck.

This marks the second time the world of social media has collided full-force with the reality of my day-to-day.  To those who have not experienced something similar, the feeling is quite extraordinary; it is the feeling of a sudden worth invested in those hours spent flicking around on touch screens and in browsers.  Immediacy, connectedness – I felt a sudden kinship with the members of the band who (judging by the flurry of replies to their post) I had missed by mere seconds.  Above all, a feeling of synthesis between the love for my hometown and a musical act who has, second only to Broken Social Scene (with whom they share members), maybe, come to typify and stand for Toronto’s young artist community.

The fact that these sentiments were visited upon me before I had stepped foot into the ACC (or even considered attending the show) should wholly quiet any of the remaining naysayers to the power of these little devices to which we all might as well have a surgical attachment.  My thoughts on the gig notwithstanding, this profound, perfect little moment was something I felt ought to be shared.  Big love to Emily and The Guys.

Unfortunately, this perfect pearl of experience was far and away the best part of the evening with Metric.  At the Air Canada Centre, their sound was not equal to the task of filling the cavernous space.  For much of the show, the audience was standing lacklustre and seemed unable to connect with the band in a meaningful way.  A tidy light show and the punchy material of their latest- the radio-friendly Synthetica- were breezed through with practiced familiarity; this was, after all, the final stop on their tour.  Emily Haines was undaunted, and did her best Adrian-Lyne-in-Flashdance impression throughout, but her enthusiasm bordered on frenetic at times and seemed to sour on delivery.

And fitting that it would be Toronto: towards the end of the set, Emily nostalgically appealed to her time at Etobicoke School of the Arts and reminisced on the origins of ‘Monster Hospital’, Metric’s anti-war hit from 2005.  Funny, she said, that it seemed to be all the more relevant today.  Their rendition of the song was tight, aggressive and heartfelt – and finally pulled the gig out of its torpor.  Suddenly we saw again the Canadian indie darlings in their element; suddenly it was easy to recall why Metric held such power over the mantle of Toronto’s best and brightest.  “I feel that it’s fleeting,” said Emily in response to the crowd’s joyous surge, “and my gratitude is immense.”  Emily and guitarist Jimmy Shaw took the stage alone for the finale, and performed an exquisite, stripped-down version of ‘Gimme Sympathy’ with a lone acoustic guitar, eerie and tremulous and yearning and, frankly, beautiful.  “To all who were and to all who are.”  Lofty sentiments indeed.  Metric had stumbled through the show but its final moments were crystallized into a single perfect moment that surely left a lasting impression on all in attendance.