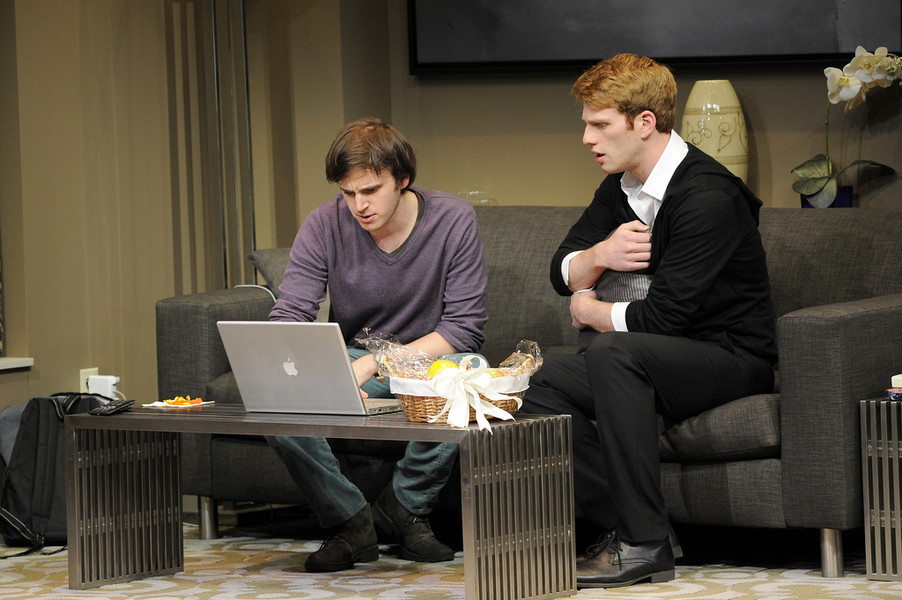 Now or Later is right now

The Huntington Theatre Company’s Now or Later at the Calderwood Pavilion has some very sharp things to say to its audience. Christopher Shinn’s intelligent script really shines on the simple but tasteful set, and is supported by some very strong acting. The play is much more character driven than plot driven, so I don’t feel bad about elucidating what’s going on. Shinn investigates a number of relevant issues with the striking combination of current political rhetoric and 20-something college graduate slang. I definitely felt as though I was the target audience for this play – a politically interested, east coast university student; I was intrigued from beginning to end.

The play takes place in a hotel room on the night of a presidential election. John Jr., the democratic candidate’s semi-closeted college-age son watches the election results with his friend Matt and worries about a recent break-up. The drama unfolds as various interested parties come into the room to discuss the breaking scandal of leaked pictures from a campus party where John Jr. was dressed as Mohammed and his friend as Pastor Bob. As the night goes on we come to understand the motivations behind the controversial choice, and the underlying conflict between John Jr. and his father over autonomy from the political machine.

The high point on the drama is the scene between John Jr. (Grant MacDermott) and his father (Tom Nelis). The adult actors – the presidential candidate and his wife – have the strongest presence on stage by far. Nelis immediately impressed me by embodying a powerful politician; he is presidential. He moves and speaks in a way I expect to see in a televised debate: educated but down to earth, powerful yet trustworthy. I wanted to vote for him. His wife, played by Alexandra Neil, also hits the mark of a political figure spot on. She is believable as a politician’s wife, and complex as a mother concerned with her son’s health and well-being. The play is structured such that the characters take turns interacting with John Jr., but I wish there was a moment when the orbiting characters come together. Adriane Lenox’s hilarious Tracy seems as if she needs more than MacDermott is giving her to reach her full potential. Someone who does a great job of support is Michael Goldsmith as Matt. (Aside: the instant liking I had might be slightly colored by my fangirlish knowledge of Doctor Who – I swear I recognized Goldsmith from “Waters of Mars” before I read his bio *end of Aside). Unfortunately Goldsmith has little opportunity to show his comedic skill. Matt spends a large portion of the play hiding in the closet or otherwise trying to stay out of the conflict. His interactions with Lenox are great and he keeps MacDermott’s John in the land of real people.

I’m conflicted about Grant MacDermott’s performance. At times he seems one note but in others he seems to really tap into the intellectual frustration of the character. It’s up for interpretation whether the whiny tone is MacDermott or his character. By the end of the play we start to see him as less of a martyr and more of a naïve idealist. It is Matt who centers the play and makes it so relevant. Shinn expertly plays with themes of anti-Muslim sentiment, the definition of hate speech, cognitive dissonance of the ivory tower, and the moral flexibility required to be a successful political candidate. The audience’s laughter is at times indulgent at a description of a post-feminist, hipster, comp-lit major arguing cultural respect of fundamentalist values while throwing a naked party; and is an uncomfortably familiar chuckle/groan at others, such as Tracy’s crack at an obvious choice where so many still vote the other way. The play never fully dives into propaganda, but rather takes references from both sides– and distributes them evenly so no character is a clear signifier for anyone specific. This is an examination of theme, not person, and it is cleverly done. Shinn manages to slip in some extremely well reasoned arguments for why things operate as they do, how we get into this mess, and what the thought process of those we criticize so harshly might be. At the same time he delivers a well crafted story, which is well acted, and well designed.

I definitely recommend seeing this production which runs through November 10th at the BCA.