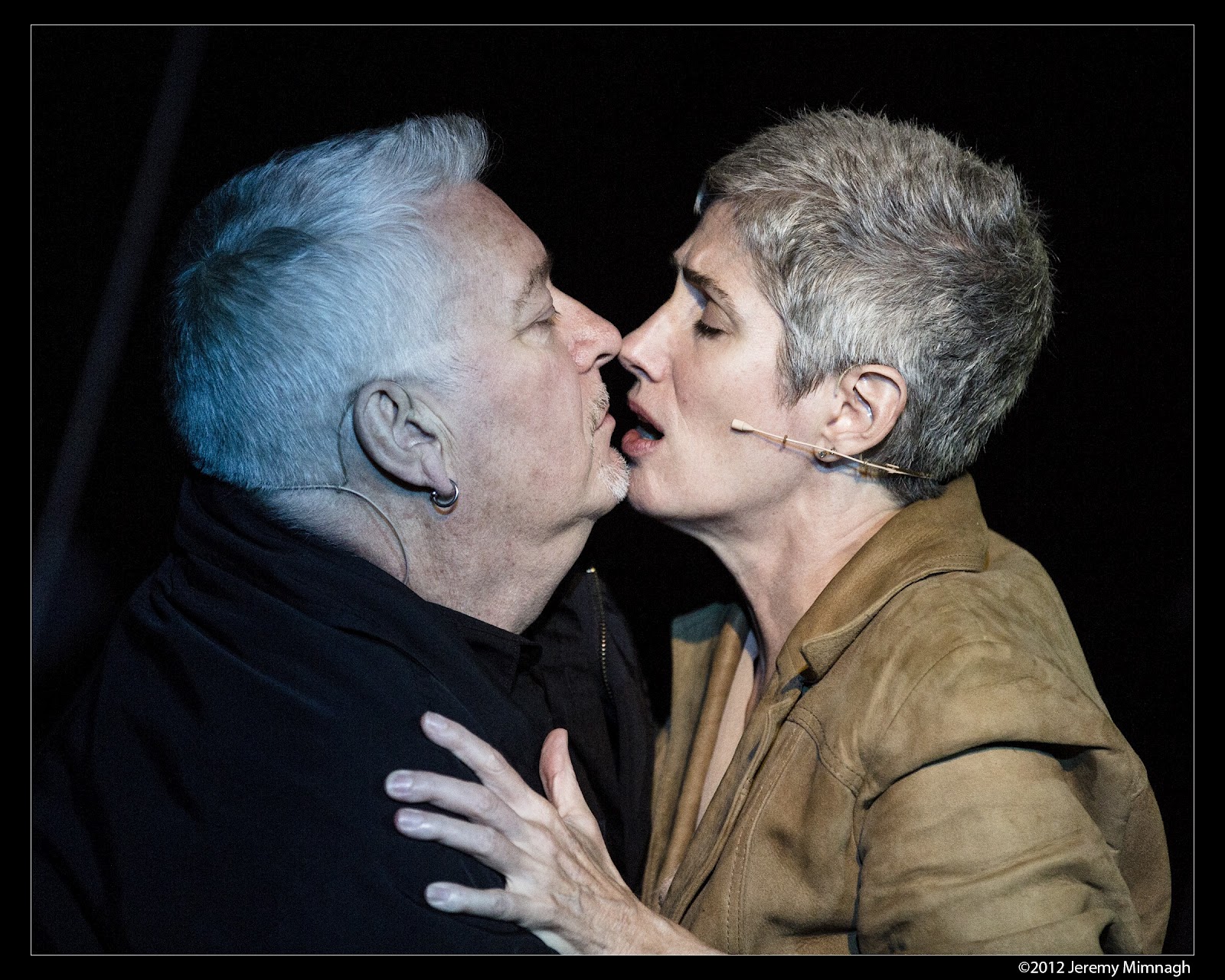 Two weeks after the PQ was elected as Quebec’s minority government- causing concern of renewed interest in nationalist policies- the time could not be more right for a project fusing our country’s strong English playwriting tradition with the electroacoustic music Quebec is renowned for.  Montreal-based composer Louis Dufort and Toronto-based writer Tom Walmsley were both commissioned by producer Fides Krucker who plays the title role in this world premiere.  This is not the first project of its kind to demonstrate the capacity of the arts to build bridges: Krucker had previously collaborated with Dufort and librettist Alexis Nouss on the electroacoustic L’archange, and worked with composer John Metcalf and librettist Larry Tremblay on A Chair in Love.  Both operas received there premiers in Montreal (2005).

From site-specific adaptations of the classics to new operas which turn form and content upside down, opera has been taking centre stage on Toronto’s theatrical landscape lately.  Add to this the two-hander Julie Sits Waiting, a show which cannot avoid inciting expectations given its team of internationally-acclaimed creators, performers, and designers.  The Backspace at Theatre Passe Muraille is a most appropriate space for the juxtaposition presented by this powerful and dynamic yet intimate show.  The steeply raked and narrow audience seating area cannot help but force our gaze directly towards the equally tight playing space – further reduced by a diamond-shaped raised platform on which most of the action occurs.  Strung from wall-ceiling-wall, and back again, are what appears to be a sophisticated stark version of party flag banners.  I am not sure what they signify in this house supposedly under renovation.  I do know one ends up being used as a murder weapon, so maybe they are razor sharp icicles?  In any case, their abstraction works perfectly well with this anything-but-conventional opera.  Set and costume designer Teresa Przybylski is much more affirmative in her wardrobe choices: Mick (Richard Armstrong), an Anglican priest, is perfectly depicted as the (past) middle-age man whose shabbiness puts him on the border of the grotesque.  He compliments Julie, perfectly, who is ever so slightly classier in dress, accentuating the spark in her curious, yet glazed-over eyes.  After all, this mother is almost possessed, intoxicated by her encounter with Mick while her husband is off doing his officer duties at a parade.  While she is enthralled in the moment of lust which leads her to test the boundaries of monogamy, it is Mick, ironically, who will go on, in a sharp unfolding of events, to proclaim his love for Julie whom he proclaims is “above God” and erases his “fear of hell.”

I am not going to delude you into believing that Julie Sits Waiting is everyone’s cup of tea, because, inevitably, some will be turned off by the overdone love triangle, the classic theme of adultery, or the fusion of singing styles.  But this show, in so many ways, is not what (initially) meets the eye.  For starters, this is not your typical ménage à trios involving star-crossed lovers.  We are never exposed to Julie’s cop husband Rick.  And it is not only the anti-hero or the damsel in distress who is bound for danger here, but, rather, both risk equally the bitter fate of their choice to revive the excitement of young love.  Yes, it’s all about the dilemma which exists between passion and rationality, but the focus is entirely on the conflict between two people whose generation is all too often depicted as ultra-normative on stage.  It’s captivating to learn how these older adults meet, and what leads them to get together offline.

Not only is the usual exploration of universal themes made a little more insightful  by details in the plotline, but by the direction of the piece.  Directors Alex Fallis and Heidi Strauss make brave bold choices.  The action begins with the actors backs turned to the audience as their characters nervously meet for the first time.  Their uncanny positions become emblematic throughout the piece.  Sometimes it’s simply to shift focus onto one member of the duo, but most of the time this choice simultaneously reinforces the perverse sense of an endearing Julie who is equally insecure, guilty, and, baffled, and Mick’s utterly eerie obsession with his married internet crush who has given new meaning to life.  Their awkwardly mesmerizing behaviours, and skillful maneuvering of the stage, as only real pros can do, foreshadows the catastrophic consequences that are to become of their desires.  I got the sense, throughout, that death is not just associated with adultery, but rather adultery is death – at least for these two.  The metaphor is exquisitely echoed in every gesture, every breath, every sound we hear.

At this point, it is natural that we discuss the several experimental aspects of this show which are, perhaps, the most triumphant in helping us get beyond the fact that we are watching the same old opera narrative about uneasy love.  As we watch Julie and Mick move between exhilaration and struggle, there is something really raw about the way they sound and, equally, visceral in the way they move.  And it’s more than an effort to appear as primitive sex-crazed beings, though these actors, definitely, accomplish that task.  At times I, actually, feared for their vocal health, and secretly imagined the limits to their bodily contortions.  It is only after you become aware that Armstrong and Krucker are each pioneering champions in the area of experimental voice and movement research that you begin to feel a little relief, accepting that they must know what they are doing.  One of my favorite scenes takes us into the depths of Mick’s inferno, as he moves between the use of speech and an array of vocal sounds – and, that’s the point, strangely enough.  Last but not least, it is the mind-blowing sound mixing achieved by Darren Copeland and complimented by video projections (Jeremy Mimnagh) at different points throughout this show that is most captivating.  The sound is so strangely peculiar that I made the mistake of thinking it was created entirely for its own purposes, but it is actually an extension of Dufort’s composition.  Of note is the feat, right after Julie and Mick first sleep together, that looks and sounds like the blowing up of the entire solar system, as we audience sit still in darkness asking “what the heck did we just see?”  Even Julie, sitting upstage with her back turned, is magically morphed into a wallowing fire of hell thanks to the magic of projections.  Also memorable is the little square video projection on the backstage wall of a young girl, as we listen to Julie tell us about her playful thirteen year old daughter Bernadette.

Not everyone will be pleased with this show.  Those who know me know I can be skeptical of sophisticated technologies on stage and narratives which lack purpose, but I was pleasantly engaged from start to end.  This show is worth seeing, if anything, for the chance to see some of the experimental hybridized art forms that all too often we read about happening elsewhere.  For once, the renaissance is in our backyard.  Only time will tell if this form of coarseness becomes the new standard of beauty.