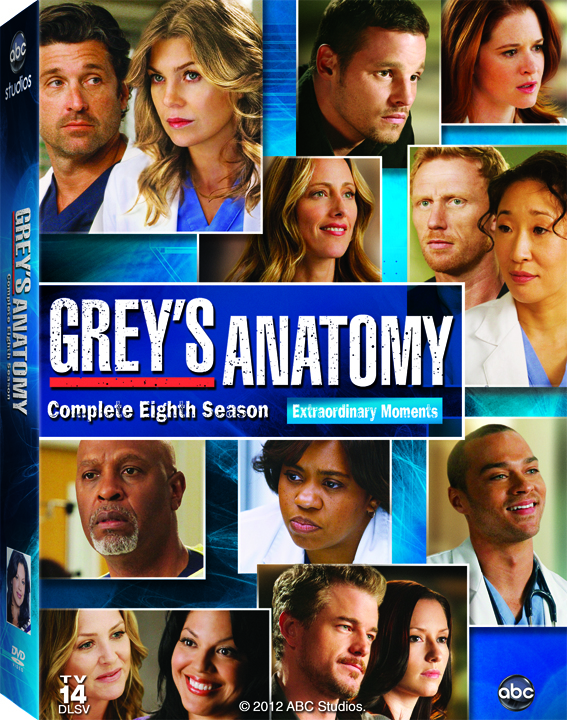 As many of you already know, Disney Canada has been nice enough this year to give us some extra copies of some of ABC’s most engrossing 2011-2012 shows on DVD and Blu-ray to share with you amazing readers. You’ve already had the opportunity to win Revenge Season One on DVD by answering “what’s your favourite serialized show?” then Once Upon a Time Season One on Blu-ray by answering “f you could be any fairytale character, who would you be?” and this week we have another special giveaway for you.

This time it’s the great, the engrossing, the legendary Grey’s Anatomy on DVD. Season 9 of the medical uber-hit starts on Sept 27th but you can tide yourself over with Season 8 on DVD (out Sept 4). The first half of the season is full of self-aware comic gold and the always-adorable presence of Scott Foley as Teddy’s new husband. The second half heads into trademark emotional darkness as the residents take “the Boards”, Teddy spirals, Christina and Owen fall apart, and the season’s standout characters- Jackson and April- reach a crossroads. And it all leads to a Big finale  (including the death of one major character and the heartbreaking departure of another). Then there’s that torturously Ambiguous ending…

We have 4 copies of Grey’s Anatomy Season Eight on DVD (in stores Sept 4) to give away to our lucky contest winners. Here’s what you have to do: leave a comment on this post or tweet us @MyEntWorld (#GreysContest) with your email address and the answer to the following question

Who’s the best doctor at Seattle Grace (past or present)?

We’ll pick our 4 favourite answers next Monday (Sept 10) and get in touch so we can send you your copy of Grey’s Anatomy Season Eight on DVD.

“If there is one thing that I have learned with the bombs and guns to my head and buses running down my friends, is that I am not interested in dying!” – Cristina Yang