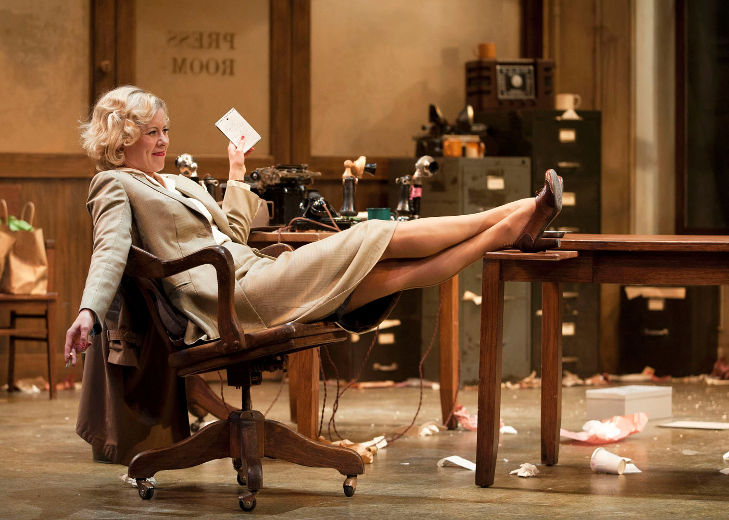 At the Shaw: His Girl Friday

Would someone please explain to me why His Girl Friday is a play? I get adapting plays into movies, and I even get adapting movies into musicals (so long as the songs are original), but a movie into a play? Chances are there’s no improving on the performances in a movie iconic enough to give someone the idea of making it into a play, and film stories rarely are small enough to transfer to a one-set stage without trapping them. There is no reason this play should exist let alone why The Shaw Festival should be staging it. But, that said, it’s kind of boring but not all that bad.

Director Jim Mezon does what he can with the adapted text, meaning that he stages it in the only period that makes sense and tries to give it as much movement as it can have in a single office set. The cast is generally pretty good, featuring Jeff Meadow’s easy comedy, Evan Alexander’s cute neurosis, and Kevin McGarry’s cheekbones. Thom Allison is clearly phoning it in as Diamond Louie (a character who serves next to no purpose), waiting for his repertory commitment of the day to be over so he can return to Ragtime, and Benedict Campbell is what he always is, meaning fine but not as dynamic as the people doing the Shaw casting think he is. Kevin Bundy is good as likable nitwit Bruce, the good guy who’s proven a bad guy because he doesn’t understand the horror of what Hitler’s doing in Germany (it’s August 1939, FYI). Andrew Bunker is also strong as an accused and desperate gunman who finds his way into the newsroom just as they’re attempting to write about him.

But if there’s anything at all notable about this production of this play that shouldn’t exist it’s Nicole Underhay as Hildy Johnson. Underhay’s spitfire charm can make any banter sparkle, even if her counterpart is, well, not Cary Grant. And thank god for that because without her His Girl Friday would be a gigantic waste of time. She’s the heart and soul and basic interest factor of the production and she, on her own, is enough to carry the whole thing.

His Girl Friday plays at The Shaw Festival Theatre until October 5th.