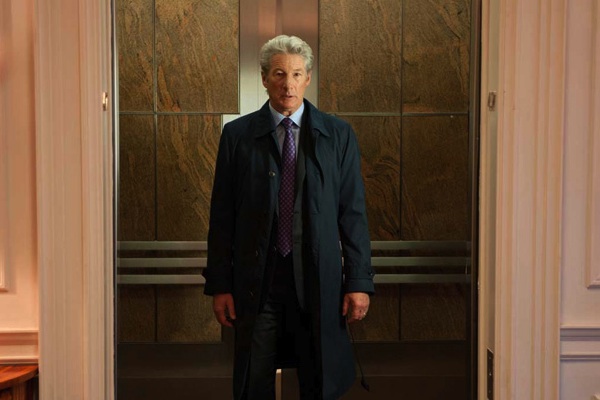 If you’re going to see Nicholas Jarecki’s high finance thriller, Arbitrage, make sure to bring an Economics major with you. For one, he or she could tell you what ‘arbitrage’ means and how it applies to the film, and, for two, they can help you follow the serpentine and occasionally muddled script. Unlike 2011’s Margin Call, which also bears a legalese name, Arbitrage is not as comprehensive in terms of industry insight, but surpasses the aforesaid in terms of dramatics.

In a scenery chewing role, Richard Gere is Robert Miller, a smarmy New York City hedge-fund magnate who takes the Gordon Gekko aphorism, “greed is good”, to heart. While not cheating on his wife Ellen (Susan Sarandon), he’s lying to his daughter Brooke (Brit Marling) about the legitimacy of his trading company, which he plans to sell. His auspicious life of chicanery and deceit is derailed one day in a freak accident, leaving Miller in a frantic scramble to hide his trail of evidence from a suspicious NYPD cop played by Tim Roth.

The principal character, Mr. Gere outshines his contemporaries, partly due to their under-developed personas, but largely because of his magnetic performance. As his anti-hero ambles his way through tribulation, the plot will muddy as it thickens, but ultimately ties together in a timely and competent manner. Ending on a detached and frigid note, there isn’t a sense that Miller has learned anything from the entire ordeal, and perhaps, like most Wall Street cronies, he never will. Perhaps that’s the entire point of Arbitrage.