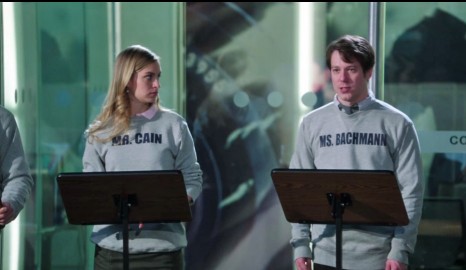 The Newsroom: “The Blackout, Part 2”

Before I really get into it, I’m just gonna take a moment and say that I really wish this show were on a broadcast network. Sorkin doesn’t usually go in for the sex and language so unless the FCC was going to shut down the vandalism bit this week all he’d be giving up is the expletive Sloan hurls this week and the pot bits that actually haven’t been very well executed anyway. Yes I’d be sad to see Sloan’s well-placed expletive go, but back in 2000 when faced with not being able to curse god on NBC Sorkin had President Bartlett do it in Latin, surely he could find a way to sidestep and thus improve on his ideas again. He’s always best when forced to revisit. Anyway, the reason I say this is that I really like The Newsroom just as it was this week- with some intensity and current issues thrown in but mostly unafraid of character stories. And I mean character stories that allow its 20somethings to talk about what 20somethings talk about- their relationships (literally, I spent 45 minutes on the phone last night talking about a boy with the most hyper-intellectual of my hyper-intellectual friends) and allow the crazy adults and their trust issues to mull over their crazy trust issues. It’s not a perfect show that way (certainly Mack and Will’s shenanigans have annoyed me in the past) but when executed well (as both personal stories were this week), The Newsroom enters primetime soap territory but manages to be better than all the primetime soaps. I really like primetime soaps, some of them are really good and shouldn’t be looked down on for being called soaps (that just means they’re heavily serialized and are mostly family and relationship drama). Look at the best in Greg Berlanti’s body of work (including Political Animals, a great show that’s executed to the highest standards but is expected to be something it’s not because it’s on cable and about politics), it’s good TV, it’s just not in the genre people want The Newsroom to be in.

I think the show needs to make a choice because right now it feels like too many shows at once. It can care about the people in the newsroom and their lives outside of the office or it can stay in the ACN offices and make the characters shut up about their personal lives. One keeps undermining the other and it’s just not working. I would watch both those shows, though I think the former would be better because the other one just doesn’t have enough material. On The West Wing, the stakes were so high that the characters almost never brought their personal lives into it (and when they did the audience tolerated it more than they do now; not sure why) and on Sports Night, genre (sitcom) and network (ABC) allowed the show to be more fun, more personal and some may say even more “trivial” while being called groundbreaking instead of underwhelming. The Newsroom is trapped in the serious drama world of HBO and any attempt to liven up proceedings feels silly just because it’s HBO drama. Whatever Will may say about the importance of the news, these guys are reporting it, not making it, so their stakes are only marginally higher than those of Casey, Dan and co on Sports Night. Will isn’t the President, his noble professional pursuits can’t carry the show alone, so it has to lighten up and make room for a subplot about Jim and Maggie. And maybe transfer over to ABC.  Or USA! It would be so good paired with Political Animals (which desperately needs a second season pickup) where the people watching wouldn’t want it to be something it can’t be.

Basically it was the conclusion to last week’s stories (or, in Neal’s case, the continuation) and we picked up right where we left off with Mack convinced that the blackout was a sign from god that she was “doing a big thing badly” (oh hey, Dana, I miss you!). She made a grand speech about how they can all be a team again and make the show work without power but the lights came back on and undercut her. It was a funny moment that was a nod to the fact that Sorkin doesn’t actually take himself unforgivably seriously, only overwhelmingly seriously, there’s a difference. Brian was still there and he called Mack out on romanticising Will, which I liked. He pointed out that Will is hopelessly lonely and does things like court viewers so that he can feel less lonely and Mack has him infallible in her head and that’s just not realistic (still loving Brian, I know I’m not supposed to). Unfortunately that greatness was followed up by Will proving Brian wrong (as he does everyone who has a great speech about why Will’s wrong, because Sorkin’s afraid we won’t like Will if he has flaws. You’re backwards on that one, Aaron). They throw out the rundown after their idea for the debate gets shut down by the bartender from Are You There, Chelsea? (his partner, Dr. Stanley Keyworth, wanted to go with their crazy, unrealistic format but got shouted down by the Republican young gun) and the whole episode makes nod after nod at the season premiere the way a finale might (except that there’s still one more to go). I like that Will’s dealing with his issues via David Krumholtz and that’s becoming a recurring thread (Sopranos style, almost) and where he and Mack are finally heading. I like the way the staff got behind him on the debate thing and, mostly, I like that this episode involved our heroes losing one. They’re such winners, all the time, with the winning and the being right. And don’t get me wrong, I like characters who are smart and talented enough to win lots and lots but it was about time they lost something. About time they had to report on the proverbial McRib and still find a way to believe in themselves. They absolutely should have lost that debate, so I like that they actually did.

Maggie and Jim made Lisa come on as a guest because she went to high school with Casey Anthony so Lisa got to show off some of that personality that’s been actually well planted but also justifies Jim wanting to date her (because, as straight-male-ish as he sometimes is, he still would never tolerate a girl he didn’t want to talk to). I really like Lisa, though I didn’t like her off-the-rails-ness on air when she brought abortion into an argument where it didn’t belong. It was such a broad political story that it annoyed me (though I did appreciate Will’s statement that being pro-life and being pro-bricksthroughwindows are not the same thing). But it brought Lisa into the story and I liked that because I like her struggle with wanting to date Jim (who is “courting her”) and wanting to not break Maggie’s heart. I liked Jim’s”I’m nobody’s second choice” when Lisa flat out talked to him about it (ever notice how rarely in TV shows the women actually tell the guys the truth in matters of relationships?) and I liked her retort of “neither am I”.

I also liked that Jim and Mack actually spoke to each other this week (however briefly) because they’re the Number One relationship that was set up in the pilot then grossly under-served. They have an awesome dynamic and great actor chemistry and I just really liked that they were in the same scene for once. I liked seeing Don actually at Maggie’s apartment being a boyfriend for a change, though I did not like that Sorkin felt the need to insinuate that he was cheating (or at least on the tricky line of what that entails). My friend and I got in an argument the other day about this particular love square and my point of view was that Maggie has been emotionally cheating on Don for over a year and it’s sheer cowardice that she hasn’t broken up with him. She argued that because Don knows Maggie loves Jim it’s not as much on her but I think it makes sense that Don would try to hold on as long as he could- it’s his feelings at stake, not Maggie’s. Anyway, the conclusion I reached was that the only way Maggie would break up with Don is if she was given an excuse (sort of like how Katniss could never choose between Peeta and Gale if nothing happened Or if one of them died. One of them had to screw up for her to be happy with the other). So I saw this coming, but I still hoped it wouldn’t happen. I like Don. I don’t need to see Don knocked off any pedestals; what’s interesting about Don is that he’s the only character who was never on one in the first place. Now that Jim’s with Lisa we’re back in the holding pattern of the pilot wherein Maggie wants but can’t have Jim who is obviously the better man than Don. I thought we’d moved past that and changed the definition of “better man” to be arbitrary. It was still an interesting unravelling, even if it was foreseeably problematic.

Meanwhile, Neal is sinking deeper into his trolling investigation and dragging Sloan through the mud on his way. I like Sloan and I think this story shows self-awareness and defensiveness and sacrifice and perspective that actually make her a stronger character, though I’m sure there’s been plenty of feminist backlash in the articles I’ve given up reading.

The big great thing about this episode, though? Very Little Charlie! He’s been investigating that weird subplot about the NSA and Leona Lansing so he had, maybe, 2 scenes in which he spoke very little- it was the best thing to happen to the show in ages! It still has all its flaws but without Charlie almost all of them are dramatically reduced.

*Just let me complain for a moment that according to IMDB the finale of season one will be called “The Greater Fool”, which is just plain annoying for die-hard Sorkin fans since we’ve come to rely on “What Kind of Day Has It Been?”. Dude, we’re the only people keeping the hounds off of you, couldn’t we have gotten our nod?