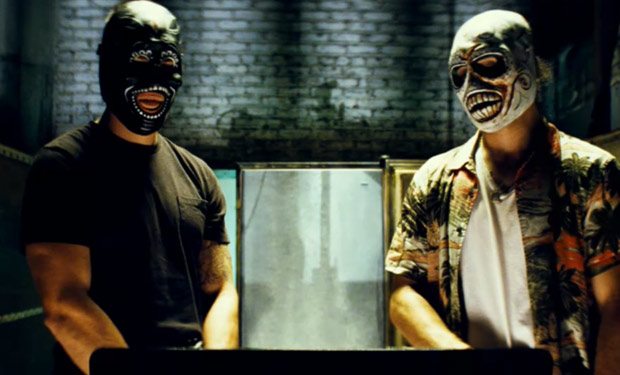 Oliver Stone’s Savages is his best work in years.  Or so the poster says.  Given the slump Stone has been in since 2004’s epic failure Alexander, that’s not saying much.  The film has been adapted from a book with the same name.  I have not read the book and seeing the film did not encourage me to get on Amazon any time soon to pick it up.

Savages is a tawdry examination of the drug and gang wars in Southern California and Mexico.  The film is narrated by Ophelia, or O as she tells us she likes to be called from frame one.  Brought to real life by Blake Lively, O is a hapless woman caught in the trance of two multimillionaire pot growers.  One is an Iraqi War Veteran who is as rough in the bedroom as his grim exterior might suggest; the other is a soft hippie who makes love, not war.  Well, not yet.  They are confronted with the idea of ceding to a Mexican Drug Cartel run by an enforcer (Benicio Del Toro) and his boss (Selma Hayek).  Trying to bail them out is twisted DEA Agent John Travolta just trying to make some money on the side.  If this paragraph sounded convoluted, imagine two hours of seeing it unfold.

In a decade that was ushered in by Steven Soderberg’s brilliant film Traffic and while cable television is owned by a few little drug shows entitled Weeds and Breaking Bad, one would hope that Oliver Stone- the man behind the greatest Vietnam film ever made, Platoon; the brains behind the movie that synopsized the Reagan 80s, Wall Street; the fearless voice who challenged the Magic Bullet theory in J.F.K.- would bring something new and interesting to the table when talking drugs in the oughts. Spoiler alert:  he doesn’t.

Savages is a pretty-too-look-at, over-sexualized, over-fantasized, over-zealous story about two men sharing one woman, enjoying hydroponic marijuana, and occasionally killing people.  It is completely outside the realm of reality or believability, and sanctimoniously preaches about the terrible acts of drug cartels without ever bothering to touch base with the reality of the situations the movie is based upon.  Savages is to drug movies as pornography is to real sex.

The film’s voiceover is obnoxious from the start and explains, in painstaking detail, EVERYTHING that happens on screen.  No amount of T&A- and there is A LOT- could distract from the piss-poor narrative and atrocious character development.  No one changes, nothing different happens, we just fade in and, two hours later, fade out.

Some have called Savages  “a roller coaster ride,” and “so ridiculous it’s fun.”  The problem is that Savages never achieves a level of camp that lets me know it’s drinking its own Kool-Aid.  There are rapes, beheadings, a huge body count, and extreme violence.  None are done in jest, all are done to get a rise out of the audience, and most are diffused by cheesy one-liners or casual F-bombs.  The atrocities committed by and against these characters never seem to faze them.  Maybe that should be a commercial for the weed they are growing.  Everyone in this film is so detached from real life it is impossible to enjoy without a bong, a brownie, or at least a contact high. Might we suggest a non-12 step support group forum instead.