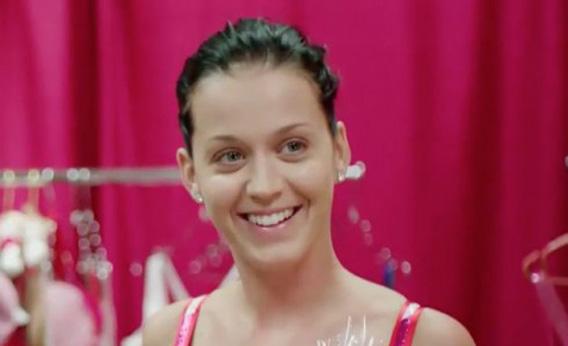 Post-Avengers, there have been a pile of movies I’ve been excited to see and only one of them has exceeded expectations. Magic Mike wasn’t what I was expecting, Brave annoyed me, and I was largely disappointed in The Dark Knight Rises– just for a few examples. But the one movie I saw on absolute instinct against my better judgement, that’s been easily my favourite movie of the year so far. I promise I’m not joking or being ironic here, Katy Perry: Part of Me is one of the most moving films I’ve ever seen.

I haven’t been propelled from laughter to tears so quickly and so often since last fall’s gorgeous “cancer comedy” 50/50. I’ve always liked Katy okay, enjoy the happy-pop feel of her best songs (“Teenage Dream” is just So Good), and do my best not to judge her unhelpful sexualization of childhood dreamscapes. So when the trailer for her documentary concert film (which is about 80% documentary, 20% concert film) played over and over again in the previews for anything conceivably young or female-skewing at the Cineplex, I thought it looked like fun.

And it is fun.

But it’s also beautifully revealing and weirdly inspiring and shockingly moving. I was literally that girl, sitting alone at a weekday afternoon showing of Katy Perry: Part of Me, mouthing the lyrics and quietly sobbing.

Part of Me chronicles Katy’s massive California Dreams tour in 2011- the followup to a monster album that broke records and won hearts around the world. The documentary takes us behind the scenes of the tour including the glimpses into Katy’s life and marriage that come with it (including the heartbreaking dissolution of the latter). It also tells the story of Katy’s unlikely rise to fame, a fascinating personal story that is far more fascinating than I knew.

The fact that her parents are Pentecostal preachers is well-known and something I had trouble reconciling with the whipped cream-shooting bra before seeing the film, and not much more explanation is given about that disconnect than basic rebellion. But there are personalities who helped shape Katy’s life who are revelatory- like the record exec who literally stole her files and ran them to Virgin Records when she saw that Columbia wasn’t going to do anything with her, risking her own job and reputation on this random girl’s talent;

or the best friend Katy met on the LA club scene with whom she swore a pact to never give up until they’d made it as a singer and actress (surprise! It’s Shannon Woodward, the adorably wry star of Raising Hope). Katy has an unfailingly loyal team (including her big sister, who is devoted enough to tell her the truth no matter what), a kooky grandmother, and a crazy-religious mother who fundamentally rejects her daughter’s entire line of work but shows up to her risqué and indulgent concert to support her anyway. Katy’s life is filled with characters as interesting as those she creates for her wackadoo music videos (including the star of “TGIF”, Kathy Beth Terry, whom Katy’s sister begrudgingly but exuberantly plays onstage), but what’s really interesting about Part of Me is that all those interesting people are so devoted to someone who actually seems to deserve the devotion of not only them but her millions of fans.

Katy Perry is, awesomely, the breakout star of Katy Perry: Part of Me. That seems obvious, but Katy could have easily been a product more than a person or actual “artist”, or she could have been just fundamentally boring offstage (as I’m still convinced the real Lady Gaga is). But Katy is admirably great. Yes she works hard and cares about her fans and really believes in her music- such conclusions are to be expected from a film produced by its own subject- but what stood out to me was Katy’s defiant strength. Her feather-light music and sugar-rush aesthetic choices aren’t the label-suggested and focus group-ed constructions I would have assumed. Rather, they’re exactly what Katy wants to do and who Katy wants to be. Starting out around the time of Avril Lavigne and inspired by the grungy-truthful Alanis Morrisette, attempt after attempt was made to turn Katy angsty, grungy, “deep”. But what Katy Perry does in her music, in her concerts and, most notably, in her film (and, seemingly, life), is promote joy in the face of god-knows-what. Joy. She wants you to dance and sing and jump around and wear bright colours and generally just remember that happiness isn’t all that hard. That beautifully simple sentiment comes through in remarkably touching moments like when she’s joined on stage by a crowd of her fans to dance to Whitney Houston’s “I Wanna Dance with Somebody (Who Loves Me)”. The crowd of fans is hand-picked by Katy’s sister who has her eye out pre-show for anyone in a costume, ensuring that when Katy pulls people up on stage to dance with her they really are people who love her.

Katy’s fans play a huge role in the film and provide some of its most touching moments. The doc kicks off and ends with the testimonials of fans who’ve been affected by Katy’s music. That’s a forced device, but there’s no arguing with the honesty of the moments that show us why her fans love her so much. My favourite example is about ¾ of the way through the film, the climax of the Russell Brand tragedy that’s been playing out in the background.

A common criticism of Part of Me has been that it dances around Katy’s divorce, but I have no idea where that criticism comes from. There isn’t a ton of footage of Russell and there’s certainly no interviews with him, but his absence is what’s interesting and it’s not as if the subject never comes up. Katy and Russell are talked about extensively- how they met, how they fell in love, how she sacrificed her precious 2 days off every 2 weeks to fly around the world to wherever Russell was- and the fact that he barely shows up in her backstage footage shows how little he showed up for her. It’s a fascinating slow falling apart and if you missed it then you weren’t paying very much attention.

All this backstory is in service of my favourite moment in the film, bear with me. Katy’s at a concert in Brazil, a full stadium of fans awaits her imminent appearance. But in her dressing room Katy is literally crumpled in a ball. The tough and joyful singer has been hit in the gut by Russell asking for a divorce (a development the waiting fans are still ignorant of) and she’s falling apart. Katy’s team (also in the dark) stands awkwardly, unable to get any answer from the sobbing star- “what’s going on?”, “should we cancel the show”, “we’re going to cancel the show”. Minutes go by, but when that last statement is uttered Katy stirrs very very slightly and says “Todd, start” (Todd being her long-time makeup artist, tasked with the first job in pulling Katy together in time for the concert).

The next thing we see is Katy on the elevator platform that will carry her onto stage, dolled-up for “Teenage Dream”, doubled over and unable to breathe because of  the tears choking her.As the beat begins and she gets closer to the stage, you see Katy pull herself up, plaster a smile on her tear-stained face and launch into her trademark song about the giddiness of unconditional first big love. It’s not a huge thing on the grand scale, she’s not securing a beachhead or bouncing back from addiction, but on a personal and relatable level that took Guts and an incredible ability to power through. Katy makes her way through the concert and finally gets to my absolute favourite song on her roster- “The One That Got Away”. Normally a sweetly sad tune with a driving-beat and rousing chorus, Katy sings it as a heartbreaking ballad, crooning “in another life/I would be your girl/we’d keep all our promises/be us against the world” into the microphone as she tries not to cry. By the end of the song she loses it a bit, pausing to catch her breath as the tears just roll, eyes to the floor. Remember now that the audience doesn’t know what’s wrong- no one does. But they start chanting anyway, in Portuguese, translating to “I love you”. Katy doesn’t understand, but she understands, and the fans get her through the rest of the concert as I quietly sob in my theatre seat because nothing tears me to pieces like kindness and unadulterated love and someone keeping going when all they want to do is stop.

It took a lot of courage to make the movie that Katy Perry: Part of Me is. It’s been mercilessly mocked just for existing but, more than that, it dares to show her at her weakest and most vulnerable. Sure it comes out on the purely positive side of its subject but it does so honestly, otherwise it never would have had me in tears the way it did. Katy Perry: Part of Me shows the person underneath the painted face, blue hair, and pinwheel bra, but it also made me understand the point of the painted face, blue hair and pinwheel bra- for the fun of it, proving along the way that Katy is plenty “pretty without any makeup on”.