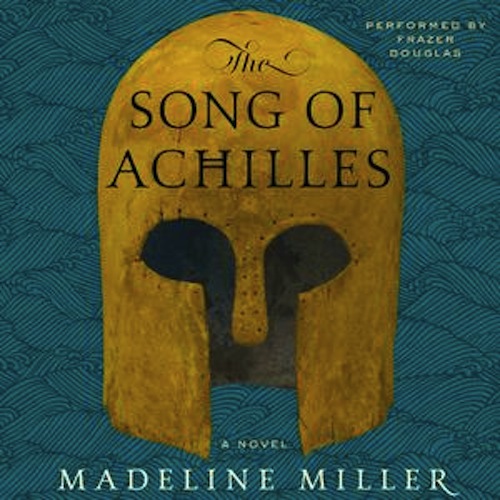 The Song of Achilles

Madeline Miller’s novel, The Song of Achilles, is Patroclus’s story. Miller’s novel reinterprets The Iliad through the lens of Patroclus—Achilles’ companion, friend, and lover—and she anchors the whole thing on their relationship.

This book isn’t quite as good as it wants to be. The prose … tries too hard for poeticism, instead of just being poetic—sometimes I can feel it straining. And there’s a sentimental streak a mile wide that’s sometimes comforting and sometimes too sappy for me to get through without rolling my eyes. But man, if you can deal with thoroughly non-genius, but still solidly good writing ‘til the end, I promise it will be worth the wait. The ending will also kick the emotional crud out of you—in a good way.

The Song of Achilles starts with Patroclus as a very young boy in his father’s court, and continues to narrate his young life—eventually ending with the fall of Troy. I wasn’t a fan of the beginning. I mean, I get trying to show us their beginnings for the sake of earning the weight of their relationship and the ending, but.. Some parts of the early years just feel redundant. The book moves quickly, so at least no significant time is lost or wasted. And I’m sure some people will think that I’m being too harsh and that Miller’s descriptions of their boyhood and teenage interactions are beautiful and worth the time she spends on them. But there were times when I had flashbacks to the part in Jane Eyre when she’s in an orphanage because nobody loves her and her one best friend dies of the consumption (like you do back in the old days before germ theory got popular). It wasn’t nearly that bad—but there is a similar overexposed, diary quality and I was happy when we finally got to Troy. Another reason that I didn’t like the early years is that I can feel Miller trying to capture the sort of mystical yet visceral sexuality of certain black and white photos but… I didn’t always buy it. So my problems with the beginning were probably at least somewhat based in stylistic issues.

And up until the ending, the style of the writing did irk me a bit. There’s an almost YA sensibility about the writing style. It feels newborn—aspiring toward a lot, but unsure of how to get there (Icarus-esque, if we want to stick with our mythical Greek references). And man, is it emotional. Hey, I like emotional writing quite a bit most of the time, but parts of the book can veer into the too tidily sentimentalized. There are also moments of emotional sensationalism that I objected to, and moments of sensuality that feel cheap.

But stylistic preferences aside, let me say this—it is incredibly hard to write an engaging story when your audience already knows the ending. And this is one heck of a famous story. I mean, for most readers, the details on are probably pretty fuzzy, but at the very least, we know that they’re going to die. So I give great credit to an author who can make us feel like we’re genuinely discovering a new story through the plot points of an old one. Personally, I’m not sure that Miller always pulls it off, but there are definite moments when she made me forget the stories I’d read before—and even just a handful of those moments more than makes up for my problems with the book.

But I’m me. And I love me a good Classical story retold. I love the different ways that people re-imagine them. What if they were really like this? What if so-and-so actually loved whatshisface? What if that guy was lying? WHAT IF ACHILLES WAS ACTUALLY AN ALIEN?! (Don’t worry, Miller doesn’t go there. Too bad. Missed opportunity, I say). And I love the characters involved in this particular Classical tale. I love Patroclus (I love him so much that I call him Pattycakes. This is real. This is who I am). I love Achilles, or at least, I think he’s potentially fascinating, and I LOVE HECTOR—we don’t see all that much of him here, but I really enjoy his mythological existence.  But most of all, I’m fascinated by all of the possible permutations of Patroclus and Achilles’ relationship—because it must take a lot to be the companion, or best friend, or lover of a truly epic, larger-than-life hero. The bottom line of that ramblefest is that I am predisposed to like this book.

But the thing is, despite all of the other little stumbling blocks, and regardless of my inclinations, Miller nails the ending because she fundamentally understands Patroclus and Achilles. Mostly, she gets Patroclus—some of this may be the result of over-association with Patroclus/author stand-in issues—but she really does get him. And at the end of the novel, that profound empathy and affection for the characters made me openly sob in public*. What Miller does to them at the end is nearly tragic and incredibly moving.

Despite all of my quibbles, if you have the time (and any feelings at all about The Iliad or supporting characters in general), you should give The Song of Achilles a read.

*If you haven’t heard my caveat about my propensity for tears, it is this:

I am a total sap. I cry. A lot. Mostly/Most consistently over dead babies/children, and star/time/dimension-crossed lovers. Unhomed people make me cry almost automatically. So be aware, I am prone to tears, and I am big ball of mush. Just because I cried in public over this book does not necessarily mean that you will.

…For safety’s sake though, maybe save the last 30 pages or so for somewhere private.