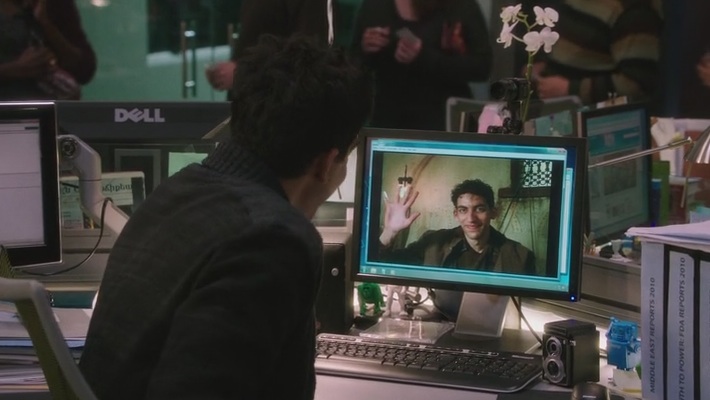 This week’s installment of The Newsroom was my favourite since the pilot. With a news story big enough to force intensity, Will and Mack set aside their monumental issues at least a little bit. They seem to have reached a point of understanding (punctuated by Mack’s episode-ending gesture and the warm hug Will wrapped her in in response) and are now in the business of working together and protecting each other. So maybe Mack can stop yelling in the middle of the office and can get back to proving that she’s the multi-Peabody winner she’s supposed to be.

Will’s story this week was relatively simple: TMI came back at him and pulled Mack’s ethics into question too (her boyfriend was using her and her show to raise his profile before he ran for congress. She, naturally, told him to go to hell). Will responded by meeting with Hope Davis’ horrible blond lady from last week to bribe her into leaving “News Night” alone, but when she dared to call herself a “journalist”, he flew into one of his sanctimonious rages. This was a Grand Speech that, on one hand,- as an entertainment journalist of sorts myself- I found obnoxious; on the other hand, I really liked the speech; it was full of the sort of “these are my people and they are amazing” stuff that I always go for. For speeches like this to work, Will has to be obviously full of it, and this speech (while self-righteous in subject) was too heroically good to be as complex as the viewers want from The Newsroom.

Mack also shared a subplot with Sloan wherein she learned economic basics for a Paley panel she was signed up for. The story was funny and charming and I do like it when Sorkin takes his smartest characters off their pedestal, but I think he thinks Mack has come off wholly smarter than she has. I can see what he wants to do with her, making her so smart that she can be dumb sometimes and it will still read, but the audience keeps grabbing on to any comical ineptitude he gives her, making up an unintended picture of a weaker character than she should be. I like Mack; I think she’s funny and smart and really competent, but I think Sorkin needs to know that a lot of people don’t agree with that and Mack can’t carry stories like this one quite yet, at least not as well as CJ did when asking Sam for help on the Census in Sorkin’s first incarnation of this story.

The A-plot, while it involved the aforementioned leads as well as Charlie and everyone else, I’m calling “the Neal story” of the week. Neal has not gotten a real story so far- at least not a bigger one than his quest to prove Big Foot exists- and I was so happy to see Dev Patel get his due. While I felt like Neal’s over-association was forced, the newsstory was the strongest “News Night” has done since the oil spill (ie: the pilot). There were essentially two storythreads that popped up within our heroes’ coverage of the uprising in Egypt. The first was “the Neal story”, wherein the “News Night” team hired a young Egyptian man to be their reporter on the ground during the events. The man they chose was someone by the codename Amen whom Neal was following online. As played by the lovely Amin El Gamal, Amen (real name: Khalid Salim) was likable enough on few lines that when he went missing our hearts were right there with Neal’s, even if his assertion that “he is me” was a little much.

The second Arab Spring thread was “The One Where They All Get Hurt”, essentially. We start with Elliot, that troublesome 10pm anchor who, until now, has served no purpose other than to cause conflict by giving Don a place to work that’s not “News Night”. But good shows are all about showing new sides to people we weren’t so sure about, so this episode spent some time making Elliot a real, if too risky, hero. After reporting from his hotel room and being chastised by Don, Elliot ran down into the fray in the streets of Cairo to “get the story” and was promptly beaten with a rock until he was broken all over. This event reverberated through the episode- in the hiring of Amen, in Mack’s desperation to not put her people in danger (which tied to that obnoxious TMI plot as well), and, most notably, in Don’s best episode yet (more in a moment). Meanwhile, a comic motif about Jim getting hit with a glass door led to his needing stitches, Neal punched his hand into a computer monitor and broke some fingers, and Don dislocated his shoulder. Basically, everyone was falling apart together. And it all tied up with a gorgeous (if Unbelievably cheesy) little Rudy-homage that played on their intra-office dynamics (though I would argue that Mack is the coach, Will is the temperamental QB1) and the downtrodden underdog dynamic established with the characters’ various physical devastation throughout the episode.

My love of Rudy aside, “Amen” was specifically great because it was another revealing Don episode, taking us a little closer to figuring him out. I love Don, you all know this. I mostly love Don because, starting out as an antagonist, he’s just more interesting than most of the others. And I’m inherently skeptical of World’s-Most-Perfect-Jim, he’s too damn awesome to trust. Sorkin set his heroism bar really high for almost everyone in the pilot episode, so Don quickly became the principal character on a quest to be a better man. I Love a good quest to be a better man (see Chuck Bass, Pacey Witter, Alex Karev, Tim Riggins, etc, etc) and have quickly found myself seeing the good in Don wherever I can possibly find it (and feeling bad for him that Maggie’s clearly in love with someone else). If you’re a Don fan (which you should be, unless you’re being judgementally closed minded), this episode had two great things for you. The smaller one came as a tiny bit in an unimportant subplot about Valentine’s day. Apparently Don planned a perfect night for Maggie (10 points to Don) so she wants Jim to take Lisa out to keep her from ruining it. Jim is terrible at being a good boyfriend to a girl he doesn’t really like (5 points to Jim, because you shouldn’t be a good boyfriend to a girl you don’t really like) but is sleeping with Lisa most nights anyway (ooh, 50 points from Jim, because if you don’t really like the girl, you should not be with the girl at all). Maggie tries to appease Lisa by swearing off Valentine’s Day just as Don enters with a bouquet of roses (+5 points) and the line “I love you every day; Valentine’s day is just an just an excuse to spend the night in a hotel” (+500 points for 1- loving her on random Tuesdays; 2- being awesomely low-key about said love; 3- not freaking out when she undermines the work you’ve put in to make the night special for her; 4- understanding that while you do love her every day, it’s also fun to do crazy, expressive, uber-romantic things sometimes for the sense of occasion, and as a reminder). While Jim is being knocked off his pedestal (and dating a girl who wears edible underwear), Don is really starting to show up to fight for his side of the love triangle. The moment was awesomely sweet while still staying on the Don side of sentimentality.

Don’s more major story, however, was even more humanizing than his Valentine’s day loveliness, mostly because the stakes were so much higher. The allround amazing Thomas Sadoski so far has been at his best when Don’s conflicted over knowing he’s in the wrong, so he was predictably incredible this week as Don was wracked with guilt over bullying Elliot into covering the riots from the street (where he was swiftly beaten). One of Don’s defining qualities has proven to be, from the pilot, an immovable determination to tell the story as effectively as possible, despite the fact that his definition of “effective” is different from Will’s. In this case, said determination came out as a frustrated call for a reporter on the ground in Egypt, so when Elliot got hurt Don took it as all his fault. He was quietly intense while processing, then demanded Charlie let Elliot on the air, to make sure the public knew what had happened to him (he fires a great speech about the perception of journalists as privileged hairdos at Charlie but still doesn’t win the argument). Then he leaps to the kidnapped Amen’s defense, beating himself up in the process (that’s where the dislocated shoulder comes in), to try and save at least one person from harm. Don only admits that it’s guilt that’s been driving him crazy when Will presses him. That’s one of the many awesome things about Don; unlike the other characters, he will silently simmer and deal as best he can with his own problems before shouting them out to the office at large. This was our first real Don story; let’s hope he gets more before Maggie tears his heart in two.

“Amen” was a really strong episode. There are certainly things in it that many people will hate (Will’s sanctimonious speech, the random injuries, that Beautifully Corny ending) but I loved those things. And I loved Amen (please, can we bring him on as a recurring guest?). And I loved that Neal got something to do. And that Mack chilled out. And that Don is proving to be the man I want him to be. It was good TV and I’d be happy to watch it a third time as I wait for next week’s episode to begin.