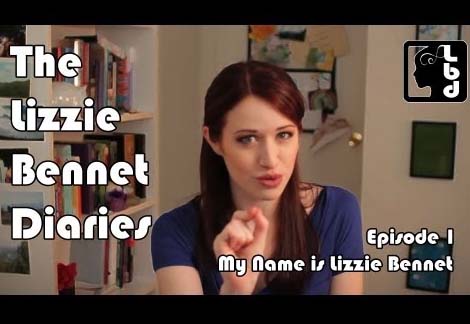 I Love The Lizzie Bennet Diaries (Most Ardently)*

You may or may not have read my I-Hate-Mr.-Darcy-Books rant. If you did, bully for you. If you didn’t, you can catch up here. As the moniker I’ve given it implies, I do not like Mr. Darcy books. At all. For various reasons, but mostly because they’re not really very good. Anyway, we’ve been down that rabbithole before, we do not need to go there again.

I mean, adaptations are a mixed bag (you have some which are AMAZING – like, pick a Shakespeare, really – and then you have some that suck – hey, remember when that CGI Beowulf movie came out years and years ago? …Yeaaaaaah), but I like the idea of them so much. And honestly, I’m not sure how else we expect to come by the majority of our stories- most of the good ones have already been taken. I think it’s sort of unreasonable/a set up for failure to expect 100% original content all the time. Some people would even say that there’s only one story, blah blah blah, the details change, the song remains the same, etc etc etc. Anyway, the point is, adaptation shouldn’t be a dirty word. It’s like practically any other category: some of the things in the category will suck, and some will be awesome. So this is how I’m convincing you that I really do like adaptations.

As for P&P, I’m not going to lie, I’m not The Biggest P&P fan. I’ve only read it twice. I am not really an Austenite. But I like it a lot (in a thoroughly non-obsessive way). Lizzie and The Bennets (who wants to form this band with me now please? We can rock out in Heavy Metal/Regency Glam style. …tbh, I do not know exactly what that would look like yet, but details, people, details!) are awesome characters. They’re witty, and funny, and about as humanly functionally dysfunctioning as any real family ever. They have hang-ups, and their own specific viewpoints and biases, and they’re fun. Darcy, Bingley and Caroline are pretty swell too. And naturally, much is made of the Lizzie/Darcy relationship. As it should be. Ms. Austen really knows how to grow a real-people relationship (full of stumbling blocks, and individual egos and awesome).

…Anyway. You don’t need me to sing P&P’s praises. Walking down the street (anywhere but Wyoming- it is the devil), you should be able to spit and hit at least one person who will happily volunteer to school you on how/why P&P is awesome.

Not that you should spit on people (that’s gross).

And those digressions at the beginning had a point, I promise!

Because the thing is this: It’s always impressive and cool and fun when people make modern interpretations of classic works. And for people who know and love the classic works, they are usually fun and full of in-jokes. But that’s usually about as far as that goes. And this is not to say that The Lizzie Bennet Diaries is going to change the world with their awesome innovation, and/or supplant P&P with it’s awesome (blasphemous even to think, I know), but it is waaaaaay more and waaaaaay better than just an in-joke.

I love the whole series (so far—they were going to VidCon when I stopped). And yes, part of that is because I get the jokes they’re telling, but the main reason I like the series is because they manage to fit funny, responsible, smart interpretations of the characters into short little YouTube clips. Lizzie still feels like Lizzie. I mean, in today’s world she’s a Mass Communication grad student, and she has internet culture and modern kid-speak informing her dialogue, but she’s still judge-y, funny, witty, easily embarrassed, defensive, idealistic, righteous, and fiercely loyal/loving to those she deems worthy.

And the series’ interpretations of pretty much everybody else are equally great. Jane, Charlotte, and Lydia are believably but ludicrously sweet, sensible and charming, and brazenly self-absorbed, respectively. We haven’t seen Bingly, Darcy, Caroline, or Mr. and Mrs. Bennett on screen yet (and Kitty is … an actual kitty that Lydia adopted. Mary is gone), and the series relies upon Lizzie and the girls to report what’s happening to us. Seeing Lizzie imitate her mother (and various other people) in “re-enactments” of the major plot points is great. But watching Jane tell Lizzie she’s being unfairly mean about their mom, Charlotte point out that Lizzie’s selectively forgetting significant glances from/shared with Darcy, and Lydia insist that she’s awesome at video games (and also, not a slut) is an oft-hilarious way to remind us that a huge part of P&P is the character-bias, and that none of these characters ought to be lauded as perfect paragons of anything (except great character writing).

*I refuse to apologize. It was awesome and you liked it.

Do not attempt to share with people who aren’t up on/immersed in internet culture. I attempted to show them to my mom, who LOOOOOOVES P&P. Like, every Christmas and birthday she gets a different movie version- Colin Firth? Check. The Keira Knightley one? Check. Bride and Prejudice (yes. The Bollywood one. No, I’m serious. Dead serious)? Check. Bridget Jones? Please. Austenland? Duh. Like, you have no idea. But when I showed it to her, she was just like, “What did this mean?,” “That’s not very funny,” and “Why are you making me watch this?” It wasn’t the P&P connection, obviously, so I’m concluding that it must have been the youth/internet culture factor (I’m calling it The Greendale Effect).

Also, if you’re a super purist and have never liked an adaptation in your life, this is probably not going to be your jam. Nbd.