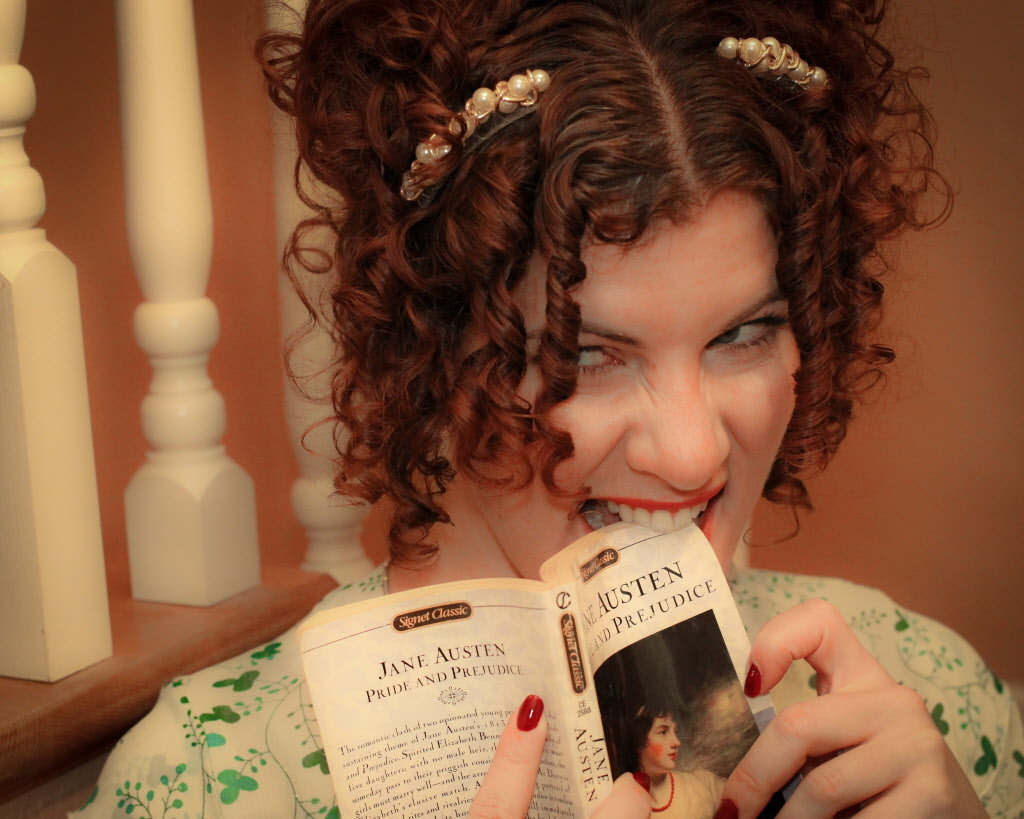 Okay. So I went to the bookstore recently, and I was just browsing around the bookstore, looking for something new and exciting to read, like I do, and I noticed something disturbing. The ubiquity of Mr. Darcy fan-service books. Published books, being sold in the bookstores, about Mr. Darcy and how he’s such a stunner, and wouldn’t you like to read this book and pretend to be Lizzy Darcy and bathe in how he’s so rugged and antisocial but loves you/her so much?

And it’s a stealthy, insidious, little thing—buds, tiny growths of fan-service on every shelf. These books aren’t in a concentrated section, it’s just a sprinkling, sort of everywhere over general fiction. On every level of every shelf there’s at least one book about Mr. Darcy. I’m not kidding, I got so intrigued and plagued (it was like looking at a car accident, or picking a scab, or something equally compulsive and horrible) that I actually counted at one point. And these books are not about Pride and Prejudice, The Bennets, or even really Lizzy and Darcy—they’re just about Mr. Darcy and the audience.

You’ve seen these books. I know you have. The covers have a lot of pink, and swirly-type script, and they all have blurbs on the back about “But what happens after the wedding?” or somesuch implying marital troubles and/or sexual hijinks from Mr. and Mrs. Darcy. And I mean… ugh. There isn’t anything wrong with wanting to write or read a story about characters fumbling to figure out how to actually live with each other. Those stories have merit—plenty of them have something to say, and specific characters with specific circumstances to respond to. And I have all the respect in the world for a well-executed adaptation (uh, Shakespeare stole the plot of ever single play he ever wrote, but that doesn’t make his adaptations of those plots any less worthy of being considered well-crafted pieces of art in their own rights). And don’t get me wrong, again, these are not the books interested in actually examining Pride and Prejudice (like Death Comes to Pemberley, or Bridget Jones’s Diary). The books I’m talking about are basically lite Romance novels about getting it on with Mr. Darcy.

Let’s not beat around any bushes. I’m judge-y. And I don’t like these books. And you might well say: “Borah, you don’t have to like these books. If you don’t like them, don’t buy them, and don’t read them, and just let other people have their own opinions, and enjoy them undisturbed.” And that would be fair of you to say. It’s not my business what other people like, and (despite appearances) it’s certainly not a goal of mine to browbeat people on what they should or should like.

My issue with these books isn’t that people are selling and buying fanfiction, although I do think that’s weird (dude, if that’s your game, you can find that on the internet for free, or, if you’re so inclined, write it yourself). My issue isn’t even that I think the books are boring and predictable (although I do tend to find them both boring and predictable). My big issue with these Mr. Darcy fan-service books is the most basic issue that I have with the Twilight series—the book becomes a vehicle for voyeuristic, vicarious love, with a vague, dangerous, and unrealistic archetype.

Everybody wants to be loved. I get that. I am not totally devoid of a heart (pinkie promise).  But I think that there are two fundamental issues with using Mr. Darcy books as a way to feel loved:

The First Thing: Mr. Darcy is not a character that should be lauded as a romantic archetype. And yes, I clearly have different taste than the people who like these books, but my thing is not that Mr. Darcy isn’t a cool or interesting character. My issue is that these books tend to sentimentalize Mr. Darcy as someone who’s biting and mean, but deep down loves you, and therefore is worth putting up with the biting and mean. I think, in Pride and Prejudice, Lizzy and Darcy work together because they’re both snippy, witty-in-a-cold/bitchy-way, and they both make snap judgements about each other and everyone. And together they eventually realize that they were inappropriately prideful, and prejudiced (pun totally intended), and that it kept them from seeing the good in each other, and they admit to this and get hitched. Yay for them. But with the Mr. Darcy fan-service books, that story no longer applies, or gets marginalized, and that just unmoors Mr. Darcy from any kind of character growth, and the archetype is this sentimentalization of a rough, rude, stoic man, who deep down loves only Lizzy/you. And yeah, it pisses me off that Lizzy/other girls in fan-service-fiction are denuded of personalities to allow for reader self-insertion. But worse, I think, is when people take the archetypes of the horrible/secretly sweet guy into the real world with them. Maybe I’m not giving these readers enough credit—surely they know that a book is different from reality, right? Either way, don’t date a guy because he’s mean to you but there’s a .11111% chance that he’s just “a Darcy” deep down. I can almost guarantee you, he’s not. That’s just a lot of needless heartache waiting to happen.

The Other Thing: Mr. Darcy isn’t real, and he can’t love you back (also, Colin Firth does not love you either. He’s real, he just doesn’t know you).

And this could just be a me thing, but books like Mr. Darcy lite Romance books just feel to me like bingeing on potato chips I don’t even want—hollow, obviously misplaced, and a little greasy.

These books are the products of authors trying to feel similarly, and/or publishers banking on the reader’s desire for some impersonal, commercialized, vicarious love. And business is everywhere and it’s not in-and-of-itself something to be scoffed at or looked down on—it’s how book covers and titles and release dates get decided, and, most importantly, it’s how authors can be paid enough to write full time—it’s just a fact.

Enjoy these books or don’t, according to your own preference, but please realize that books that hollow out characters for you to step into are poor substitutes for well-crafted stories, poorer excuses for love, and only tangentially related to reality.

Valentine’s day is over, but that doesn’t mean you have to stop searching for love, if that’s your thing—that’s fine. Dance what you feel. Just don’t look for it with Mr. Darcy (or any other fictional character, for that matter).