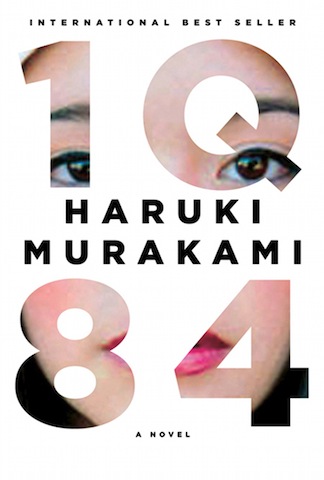 THIS BOOK IS A SLOG.

Do you know when I finally started to get interested in this story (and even then, not super invested, just mildly interested enough feel like I didn’t have to make dying whale noises whenever I picked it up)?

And I only made it that far because I am a lunatic and felt OBLIGATED to finish the darn thing.  The internal monologue basically went like this:

“I’ve never read a Murakami, I’ve been told by lots of people that I really should. I like to think of myself as well-read, so … here goes, I guess.”

*After I got to page 100 without caring yet*

And even when I finally (FINALLY) got to the end, it didn’t feel worth it. I was pissed and relieved in equal measures—pissed that, in the end, it had turned out to be such a waste of time, and relieved that it was FINALLY over.

It felt more like a chore dispatched than a book read.

So know this upfront—this book was not fun for me.

It was a mission.

You know it’s bad when you’ve checked to see how many pages there are in the book, and how close you are to the end (when it’s clear that you’re not even 1/5 of the way through yet. Btw, 925 pages is the answer. NINE HUNDRED TWENTY FIVE!). And here’s what kills me—it’s not like the first 100 pages SHOULD be boring. There’s an alternate world/timeline introduced, there’s inexplicable happenings, there’s a vigilante feminist assassin, there’s a literary scandal in the making. NONE OF THIS SHOULD HAVE BEEN BORING. But I swear, every time I opened the book, I just… had to WILL myself to keep going.

And again, it’s not like there isn’t enough plot—there’s plenty, but none of it even starts to adds up to a story until about pg 240 or so, and before that there isn’t any emotional investment. If the story is an arc, then this story is so big that the curve is imperceptible when you’re standing on it, essentially (like, the Earth is round, but hell if Nebraska doesn’t look flat as all get out). Which… is an interesting intellectual prospect, but (at least for me) a dismal, frustrating reading experience. And I think it should be noted that it’s not like I’m getting impatient about not being grabbed by the first paragraph. I’m talking about MORE THAN THE FIRST TWO HUNDRED PAGES.

We just spend so much time gathering up the Important Threads of The Story by slowly slogging through so much mundane, unnecessary detail it drives me NUTS. I can’t even count the number of times we go through, “She woke up and ate this,” “He woke up and wore that.” I DON’T REALLY CARE WHAT THEY’RE WEARING OR WHAT THEY’RE EATING! Only in precisely one instance was it even remotely important to the story. If I wanted to read that kind of detail, I’d just find a 12-year-old girl’s sparkly diary!

As you can tell, this book provoked a lot of rage in me. There were times when some character repeated something for the fifth of twentysixth time and I just wanted to throw things. There were times when I was insulted by Murakami’s/the translator’s/the editor’s estimation of my intelligence (which, if you don’t know me, I don’t take very well. Insult Borah intelligence = Borah angry. Borah SMASH!). But it wasn’t just that I took the repetitious on-the-nose style as condescending—in a much more basic way, the whole sprawling mess was just… disappointing.

What a wasted opportunity. The premise (while not super original) is interesting—Murakami could have made something pretty magnificent out of that. There are potentially smart ideas and potentially beautiful images that just get stretched to breaking and beaten to death in this book. They each could have developed into something intriguing, cool, and unique if Murakami hadn’t squandered that potential with his relentless “he-said-she-said/he-thought-she-thought” method of force-feeding. Instead, it all just came out as alternately sappy, banal, and calculatedly “shocking.” And while there are plenty of plot points in this book, I don’t think that the thematic ideas Murakami’s playing with are big or fleshed-out enough to support the page count, and every trite musing on those themes on the part of the characters makes that more and more clear.

I blame lots of people for these issues, but the thought that kept ringing through my head was this: Editor*, DO YOUR JOB!

There was absolutely no reason for this book to be this long. You would have lost no important or beautiful passages by cutting at least 300-400pages (this is a guesstimate on my part, but SERIOUSLY!). And if you’ve read any of my reviews before, you know that I like style, and I will devote a lot of loving attention to beautiful, poetic passages. I love Faulkner and Shakespeare, ferChristsake! Big descriptive, non-plot-driven passages are my jam! And they can be really great—when they’re worth the page count. These passages are not worth it. They’re not beautiful enough to warrant the insane numbers of extra pages, and every foray into symbolism, ambiguity, poetry, or metaphor gets obliterated by a thousand inane, blatant, on-the-nose statements. And Editor, the thing is, it’s your job to help the author shape the book. It’s your job to bust out the red pen and persuade/force the author to get rid of the unnecessary crap. You can’t stop doing your job just because he’s pretty famous in literary circles, and well-received, and you already have quotes of people calling him a genius to slap on the dust jacket, and you can get people to buy a 925 pg hardcover book.

Perhaps what bothers me most is the thought that if some young unknown submitted the same 1Q84 manuscript to any given publishing house, it wouldn’t have been published.

The readers probably wouldn’t have even made it to page 245.

And this is not to say that publishing houses aren’t businesses with vested interests and profit margins to mind and whatnot (they are), or that their integrity as the final word on quality is above reproach—it’s obviously not (the Teen Paranormal Romance SECTION exists, y’all). But even with all of those caveats in mind, I still think that Murakami got useless special treatment here, and a publishing house wouldn’t have been wrong to chuck that mammoth of a manuscript into the trash (as they probably would have if it hadn’t been written by a darling of the literati).

Again, I haven’t read Murakami’s other books—maybe some of them are genuinely genius.

Great. Good for him.

Even if they are, I still don’t think that excuses him from the task of editing this book.

As you might have guessed by this point, I was not a fan of 1Q84.

It wasn’t a horrible book (it wasn’t blasphemous or worthy of burning or anything), but it wasn’t good.

And it’s far too long for you to waste your time on something so thoroughly mediocre.

*And by “Editor,” I mean the editor and all other parties that could have/should have exercised some executive control over, at the very least, shrinking this thing. I’m assuming that Murakami likes it as it is.