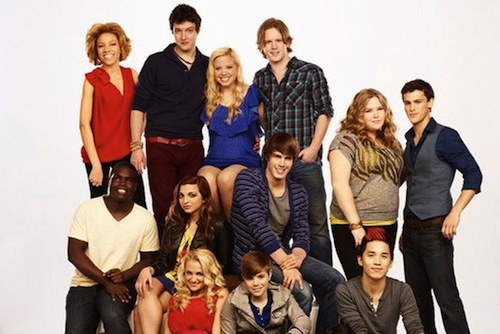 *For an update after this week’s episode, check the end of this article

The most addictive summer show in years is back on the air for season two. The Glee Project is Glee‘s more sincere black sheep cousin, complete with a cast of 14 mostly likable kids, the Nikki-Zach-Robert-Erik dreamteam of decent judges, and a rotating panel of mentors from the mother show (last season featured the awesomeness that is Ashley Fink, Max Adler and perfectman Darren Criss; this season so far has suffered through Lea Michele and Cory Monteith, though former winner Samuel Larson was pretty good). The best thing about The Glee Project? The limited amount of Ryan Murphy (he only comes in for the last fifteen minutes, to hear “last chance performances” and decide who’s “not called back”). Just kidding, hate Ryan Murphy though I do, the best thing about The Glee Project is actually the contestants. Last season gave us the monumentally popular Damian McGinty and his adorable bff Hannah, as well as Samuel (who turned out to be a real breath of fresh air when he finally showed up on Glee); also the awesome Lindsay Pearce (who I really hope they bring back as a regular) and Cameron Mitchell (who has “successful recording artist” written all over him). I was less fond of Alex, who had his own 2 episodes on Glee as the lovechild of Kurt and Mercedes, but you can’t win ’em all.

This year’s Glee Project hopefuls are even more promising than last year’s crop. We’re 3 episodes in and I’ve already had one favourite go home (Dani!) and another put in danger (Charlie). Here’s the rundown on the 12 remaining Glee wannabes (no one went home last week since someone quit the week before):

Abraham: The oldest and likely most mature of the group, Abraham always seems like he’s doing a particularly good job until the mentors point out that he actually isn’t. I still think he should do pretty well, but I no longer think he’s all that likely to since the folks in charge don’t seem particularly taken with him.

Ali: She’s fun and she’s got a lot of swagger but Ali isn’t as consistent with her vocals as some of the others and doesn’t shine quite as brightly.

Aylin: The camera is obsessed with Aylin. She’s gotten more screen time than everyone else (and at least ten times more than low-key characters like Ellie). She’s fun, has a strong voice, and is providing some of the best subplot the show’s ever had with her endless flirtation with Blake and could-be-maybe-romance with Charlie. She’s no Lindsay Pearce but in a season dominated by interesting men, Aylin’s one of the best women on the show.

Blake: Top 4 material, maybe. The best actor of the group who also happens to be handsome, funny and well- liked, Blake doesn’t have the strongest voice of the lot, but it’s not half bad. If he can be even an inch more charming than Cory Monteith, Glee should be Very glad to have him. (They are in desperate need of a solid, hook-less leading man to take over the highschool)

Charlie: I think Charlie’s my favourite. But I reserve the right to backpeddle on that if he turns out to be crazy in coming weeks. As of right now, he’s probably one of the most talented and is definitely one of the most experienced/reliably competent performers in the group. He’s also got a crush on Aylin, which is super cute. With his stirring arrangement of “Fix You” in an undeserved last chance performance, Charlie seems to have won over Ryan, which is the key to winning the show. The third most handsome in a handsome season, Charlie is COMPELLING, more than the others.

Lily: I thought I liked Lily because she’s the prettiest girl this year and I’m a very shallow person sometimes. I kid, I mostly liked her because Girl Can SING, but it is interesting that she’s among the pretty ones and the ones who are comfortable with the sexytimes, despite her being the resident “fat girl” of the season (aka “Sexuality” theme this week won’t be her downfall like it almost was Hannah’s). I also liked that she confessed to being a bully and not the bullied last week; since Glee is a property so caught up in its own victimhood it was interesting to see them not reject her based on that story. But whether I relate to her or not is not on the table here, it’s whether I like her or not, and the more I see of Lily the less I like her. She’s combative and defensive and has a temper that is truly troubling. “I’m really pissed that I’m in the bottom 3”, really, Lily? Get a grip, these people are doing you a favour having you on their show. I know Ryan Murphy likes to keep anyone who cries in front of him but this girl has got to go.

Mario: Speaking of people who are rubbing me the wrong way, Mario! My God, like Alex before him, Mario is swinging from sweet underdog to class bossypants faster than you could say boo. He does have a beautiful voice, one of the best among the men, but if he can’t hit his notes it’s not doing him any good. But mostly, Mario is entitled and weird and clearly getting on the nerves of everyone else in the competition. I’d like to clarify that he’s not nearly as bad as Alex, I just wanted the comparison because Ryan Murphy also liked Alex anytime he played the “my life is so hard” card. Mario has more legitmate swagger and isn’t quite as victim-y as Alex, but more importantly, though overbearing and defensive, I’ve never heard Mario be actually mean. He says the occasional condescending thing, but it has yet to escalate to the point where someone has to bring it up at last chance performances (like Damian had to in defense of Matheus last year).

Michael: The cutest boy of the year is also into math. And The Glee Project, which is, you know, kinda different. He’s sweet and quiet and getting better every week at the actual performance part. He’s an okay singer and a better-than-average dancer but is mostly just a likable guy. He doesn’t grab the camera the way Blake or certainly Charlie does, but I like Michael.

Nellie: I worry Nellie might go the way of my early favourite, Dani. She’s quiet and thoughtful/soulful, which isn’t very “Glee“. Nellie’s got a cool vibe and interesting voice  but Glee‘s not actually as about “different” as it thinks it is and she’ll soon fall by the wayside for not fitting in vibe-wise.

Shanna: The early frontrunner and by far the best girl, Shanna is allround awesome. She’s got the best voice, she can dance, she’s a pretty convincing actress and she’s decently engaging to watch. Low-drama and easy-going, Shanna might be getting overshadowed subplot-wise but if she keeps winning praise none of that will matter. That said, low-drama has never been a real draw for Glee so if her performance standards slip at all she could go the way of last year’s Marissa.

Tyler: The least capable performer of the group, Tyler also comes with the most interesting backstory. He’s transgendered and that’s coming out in ways you might not have thought of (he’s still adjusting to his new voice and body, which is interesting to watch). He shouldn’t be around much longer because he’s simply not as talented as the others, but Tyler is super sweet and has such a great attitude that I wish he were a better singer.

*Having seen this week’s episode, very little has changed in my opinions on the contestants. I still love Charlie and, actually, his struggle to understand boundaries is really fascinating. If that weren’t there, he would be more like Blake and Michael- charming and talented (though Charlie is at least more talented than Michael) but not all that interesting. Sexuality week season two was far less interesting than season one’s trouble-starting episode (what with Lindsay getting all up on Hannah’s boy and Cameron losing his mind). The only real stories of the episode were Michael’s odd brainfreeze, Charlie’s boundary issues and the emergence of Ellie as a force to be reckoned with (and an interesting character to boot). Shanna was criticized for the first time and, as predicted, Lily was weirdly fantastic at turning up the sex. Blake was good as always and Abraham really stepped it up (maybe the judges are finally starting to like him!). Tyler’s gone despite this last chance performance being by far his best, though he was overdue to leave so that’s absolutely the right decision. As of right now, I’m rooting for 1) Charlie, 2) Ellie, 3) Abraham, 4) Shanna, 5)Blake, 6) Aylin, 7) Michael, 8) Ali, 9) Lily, 10) Marco.