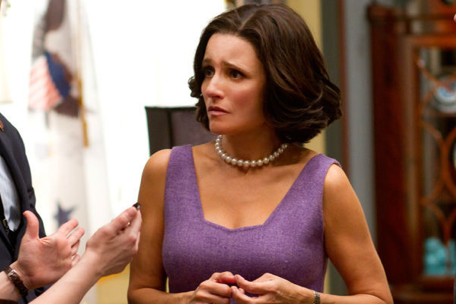 When Veep first premiered, Kelly took the show to task for being endlessly cynical and overusing “shocking” profanity. She also admitted to being a West Wing-raised idealist.

I’ve never seen The West Wing (a pop culture omission that makes me feel only slightly less ashamed than the fact that I’ve never seen Jaws), but I would also consider myself a bit of a political optimist. Yet, somehow, I really love Veep. The characters in it are not so much evil as they are hopelessly inept, and I find Selina’s struggle to retain something of the drive that led her to seek public office in the face of a mountain of “NO” really endearing. The show isn’t interested in idealism or partisan politics- it’s interested in the seemingly hopeless task of maintaining a sense of identity in the face of a soul-crushing workplace. In that way, it’s actually more like the British Office than The West Wing.

Of course, it’s also about the vice presidency. Julia Louis-Dreyfus’s Selina is very much a product of the modern American political machine, and, if you’re looking for them, it’s easy to see parallels between her and real-world famous female politicians (more often than not, that parallel is to Sarah Palin, but this week’s weepy tear up was pure Hillary). The people around her are interested in seeking political power, but they’re (with two notable exceptions) more interested in seeking personal power. When Dan (played by MyTV favorite Reid Scott) finds out that he received a promotion to the head of policy, he doesn’t start reeling off all the cool policy decisions he is going to make. Nope, he sets about moving a rival’s desk, humiliating a colleague, and issuing off his pre-written press release hilariously titled “Me- phase one.”

But then there’s also Gary and Amy. Gary has no more desire in his life than to keep Selina happy, even if that means breaking up with her boyfriend for her or buying pregnancy tests. His loyalty and dedication stand in stark contrast to pretty much everyone else, and are a nice dose of sweet among the weekly helpings of bile.

But my favorite* character is Amy, played by Anna Chlumsky. As Selina’s chief of staff, Amy is clearly an ambitious young woman attempting to make her way up the DC ladder. She’s also the only even kind-of moral person, and she normally gives Selina the best advice. Chlumsky plays her with a mixture of vulnerability and competence that stands apart from the people around her. Plus, girl’s got a hell of a reaction face, and can do more with her eyes than most people can with their whole face.

Veep is consistently funny and often biting, thanks primarily to its dedication to its characters. Next season, I hope that we get to see more of Selina’s drive and competence (by the end of this season, she’s at a career nadir that’s going to be hard to climb out of). The show has improved with every episode, though, and I look forward to continue to have my hopes for America’s future dashed every week.

*My real favorite character is unrepentantly Jonah, the president’s aide who continually annoys the staff at the Veep’s office. He consistently gets the funniest one liners, and I love all the weird background details the show has been piling on.