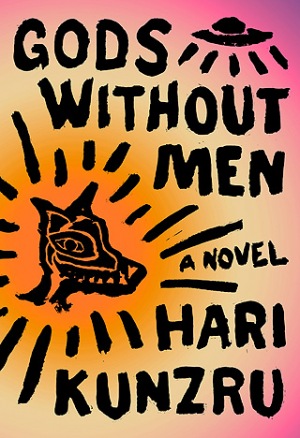 Gods Without Men by Hari Kunzru

There are some books that are plot heavy. You know which ones I mean—the ones that could fuel two seasons worth of soapy opera all by their dark, dramatic, twisted lonesomes.

And then there are the books that meander. While the plot-heavy books are racing at breakneck speed to cram everything in, these books give them a little side-eye-judgey-face and mosey along, stopping to smell roses and stuff. They have plot—stuff happens—but the plot isn’t what drives them. And maybe there isn’t a single plot. Sometimes the meandering books have multiple little plots that are loosely/thematically connected. You know which ones I mean. The ones that you can imagine as little kids that their parents would have put those freaky child-leash/harnesses on, because otherwise they would’ve gotten lost dreamily following butterflies, or something. These are the books that would grow up to be noodle dancers if they were people.

And, honestly, these are the books that I generally enjoy more than the plot pushers—usually right up until someone asks me what it’s about.  And then in my head I see that dramatic flat line thing and I end up feeling like an idiot with a bunch of half sentences like, “Well, it’s sort of got…,” and “…it’s kind of like…” and “…well, not a lot happens, but … a lot …… happens.”

Kunzru’s Gods Without Men, is definitely one of the meandering books where not a lot happens but … a lot …. happens. And as meandering, loose, thematically plotted books go, it’s a good one.

So… while I have historically had trouble talking about these books, I’m gonna do my best and you’ll stick with me (because I’m charming and fun and weirdly hung up on books-as-people), yes?

Kunzru’s novel, Gods Without Men, is essentially a book in which people, and timelines, are tied together by the desert at Pinnacle Rocks and the weird happenings there.  The weird happenings mainly  include strange glowing lights, appearing and disappearing children, and coyotes… of various sorts.

The book starts with a parody-fable of Coyote repeatedly killing himself in various stupid ways while trying to make meth (what else do parody animal gods do in the desert?). The other plot lines of the book have to do with: a British pop star going through a bit of a drug-riddled identity crisis; the Maratha family—with their Jewish/Indian cultural tensions and autistic son, Raj—more or less falling apart; the Galactic Command and The Star Children—a group of free-loving hippie cultists who believe themselves capable of communicating with higher extraterrestrial intelligences; a lonely, war-torn, uprooted Iraqi girl; an anthropologist studying Native Americans in the area (and his wife, and her Native lover, and their bastard son); and a Spanish friar’s missionary trek through the desert.

There are more, but those are the big ones.

And each vignette is beautifully written. The characters all have distinctive voices, the style shifts to match the type of story (and the time in which the story fragment is set), the interpersonal and cultural tensions are heartbreakingly genuine, subtle, and modern in their renderings (at least half composed of each party trying to deny that they have horrible gut reactions to things they intellectually know shouldn’t matter)—and more than anything, it’s clear that Kunzru is an astute, compassionate observer of people. Thankfully, he’s also unafraid to poke a little fun and reveal pitfalls and shortcomings aplenty.

Otherwise that Galactic Command stuff would be friggin’ unbearable.

But the way that Kunzru writes it, it feels real—through various vignettes focused on different central characters, the Galatic Command evolves. It starts out bright and shiny and idealized—the answer to the world’s woes—and fades into a cheap joke, a tarnished, broken drug distribution ring, and one sad, squealing record.  But it’s not just the Galatic Command story that morphs. All of the main stories shift and evolve as different narrators become focal and new information bubbles to the surface through their different perspectives.

I could get a little zen on you right now—the only thing that doesn’t change is the fact that everything changes, that sort of thing—but in this book, that’s not quite it. Sure, things are subjective, and they change, but the thing that was most constant for me was the ambiguity. We will never know for sure what the glowing lights are, and what the deal with the disappearing/appearing kids is. All we get for sure is that the desert at Pinnacle Rocks is a weird, gorgeous, cracked out place, and that people are really nuts, really pitiable, and sometimes funny and endearing.

I liked this book a lot—I mean, it wasn’t one of the ones that embedded itself into my soul (this happens to me… more than is probably normal). It wasn’t one of those books that seemed impossibly, magically written for Me. But I thought it was beautifully done and I enjoyed the process of reading it. It felt less like a traditional book with a cause-and-effectually related beginning, middle, and end and more like a cross section of all the humanity that ever stood at the odd, harsh crossroads of the fictional desert at Pinnacle rocks. And while I enjoyed reading it, the fragmented nature of the story—and that impenetrable ambiguity—left me feeling a little … I dunno, unresolved (maybe even a bit adrift) when I turned that last page to find that the next one had a note about the typeface used for the book and realized that what I’d already read was all I was going to get.

So if you’re looking for pat little answers; as usual, look elsewhere.

Otherwise, pick up Kunzru’s Gods Without Men and have at it.