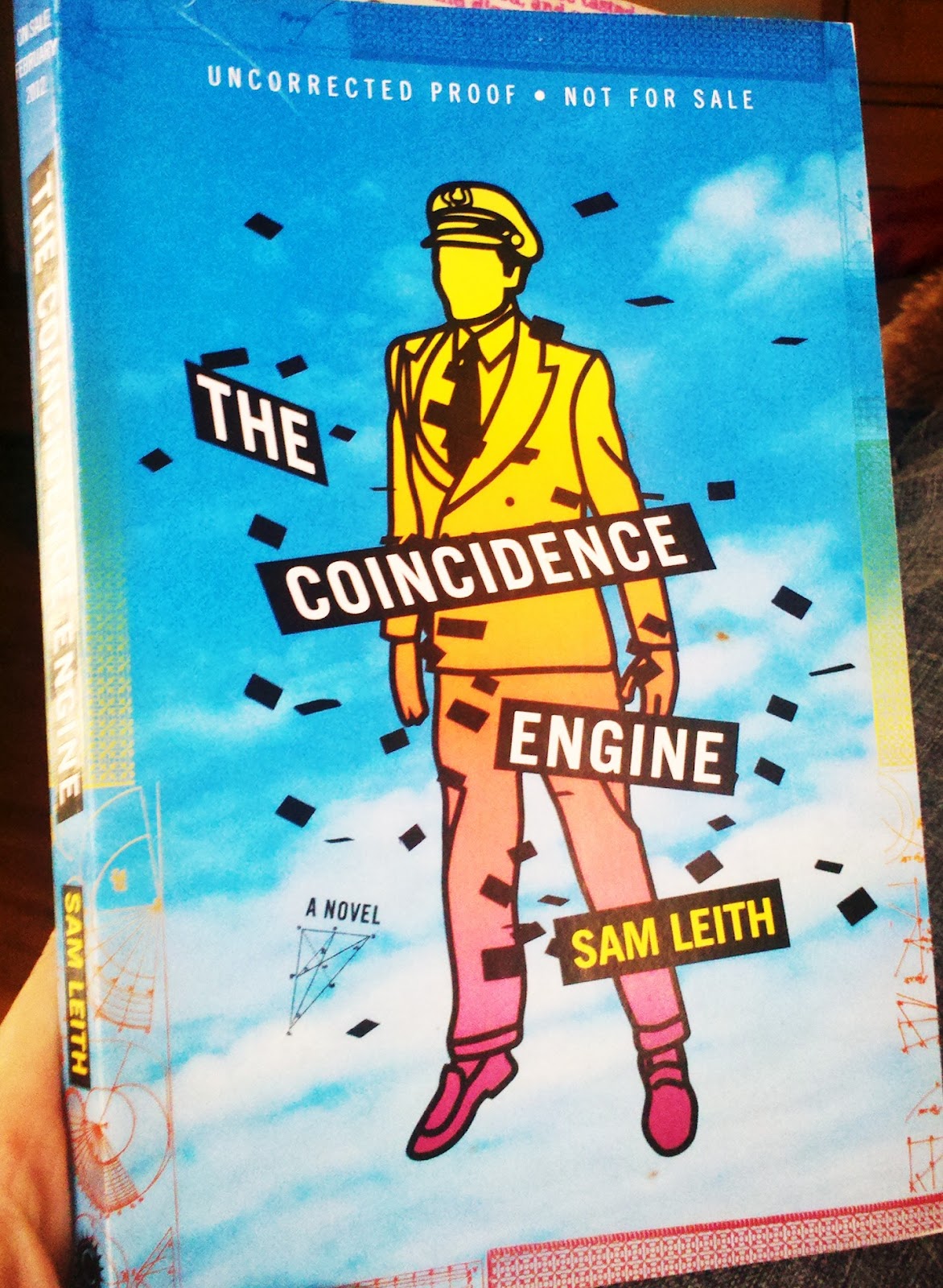 I have mixed feelings about Sam Leith’s novel, The Coincidence Engine.

The basic plot is that there’s this genius/madman mathematician named Nicolas Banacharski, who may or may not have started trying to find the mathematical proofs for an “engine” that would make the highly improbable/impossible, possible. Naturally, what exactly has happened to him is shrouded in mystery, but various agencies (and their agents) suspect that the product of his efforts is on the move, being carried across America by a British grad student named Alex Smart. The agents follow him, while Alex unknowingly leads them on a wild goose chase/road novel filled with highly improbable happenings.

I… really liked some parts of it a lot. Other parts I liked a little less. There isn’t really anything in the novel that I hated or that even truly annoyed me. The writing is good. And nothing in it is bad. The worst thing about the novel is that it feels ambivalent—sort of half here, half there. But come on, we’ve all read so much worse. I read Twilight once (I didn’t finish that series. I don’t hate myself that much). I’ve been forced to read Blake’s Songs of Innocence and Experience multiple times for various classes. Ambivalence is like a petty misdemeanor that should probably be decriminalized.

But despite knowing all that, the novel as a whole left me feeling cold, but somehow also dazed and melancholy.

I think that’s probably the root of my confusion.

My head didn’t really like the novel that much—the writing’s fine, the characters are largely fine, there’s an interesting take on the narrative voice, the premise is great but Leith could/should have taken it further—but at the same time, it moved me in a weird (but undeniable) way.

Some of the ideas in the novel—a few of the passages, the interactions of two of the characters—struck a chord with me. They felt really personal and important. I would say intimate, or raw, or genuine, but none of those feel quite like what I mean. If you’ve read or seen the play Red, or The Coast of Utopia, or a Pinter play (pick a Pinter, any Pinter) it sort of feels like that: where there’s something happening—ideas and desires that squirm around in ill-fitting words—that’s hard to put a name to, but you know that, whatever it is, it’s vitally important and it makes your heart do this weird ache thing to watch the character fumble around, trying to make do with these words that just aren’t quite enough.

At least, that feeling happens to me. Kind of a lot. I think one of my writing teachers made me see Flaubert issues everywhere, and now I can’t unsee them. So that might just be a me thing.

That was tangential. Anyway, the thing with The Coincidence Engine that drives me sort of crazy is that I don’t think the words are so slippery. I think we have the important idea. But Leith doesn’t do as much with it as I wish he would. There are a couple of lines, images, and ideas that I know I’m going to carry around with me, but despite the fact that we essentially have the language for them, they sort of fail to infect the plot and the rest of the book the way that they might have. So now I’m going to be personally attached to, and haunted by, these beautiful ideas that don’t really go anywhere, and don’t really provide any arc or catharsis for the characters (Banacharski in particular).

And for me that’s weird—to find a novel that’s overwhelmingly fine, sort of otherwise un-special, but that has these un-veneered, unpretentious shining moments of beautiful, honest poignancy that aren’t attached to anything. Sorry, that’s not quite true, the bare mathematical bones of the ideas make it into the rest of the book, but the emotional journeys, arcs, realizations, etc, that they could produce just never appear. It makes my head hurt, trying to rationalize the rest of the book, see it as more in the same league as those moments. But it’s not.

There are a couple of moments that grab me, but the rest is just the rest.

And I know that I’m a tough critic, and it’s unfair to hold a novel (and the novelist) to the standard of my imagination on what the novel could have been, and my taste about what it should have been. They’re both pretty niche things that he has no way of knowing about. And, to be fair, also no real reason to care about, particularly. I’m one tiny person on a fairly large planet. Hopefully he wrote the book he wanted to write. It wasn’t my favorite, but maybe what I take for discombobulating ambivalence, someone else will appreciate as subtlety.

And I do hope he keeps writing, because while this one was a weird almost-but-not-quite thing for me, he’s grappling with some fascinating concepts, and he’s a solid writer. There are characters that I love in there (BANACHARSKI BANACHARSKI BANACHARSKI! And Isla’s great too), and some images that are going to stay dear to me. And clearly, I’ve thought a lot about the book, and it moved me (even if some of that movement was to confusion), and really, isn’t that what good books are supposed to do?

Here’s hoping’ that next time around it’ll click for me.