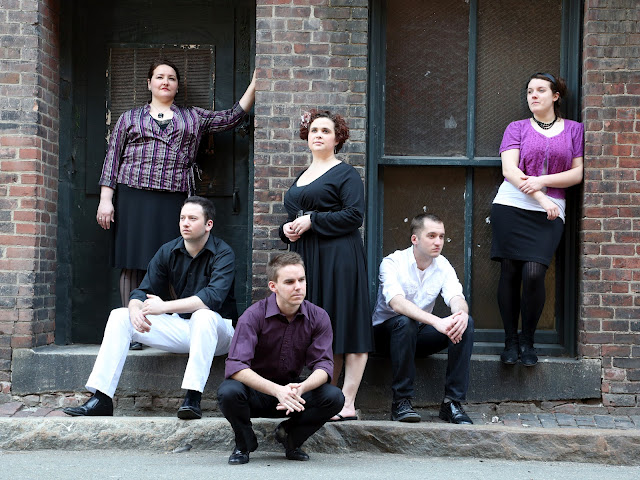 Songs for a New World: In Tune but Out of Sync

Song cycles are tough. With isolated songs and vignettes, the audience glimpses briefly into the lives of the people in Jason Robert Brown’s Songs for a New World. These people are faced with that moment of decision-making, where they stand on the brink of choice and change. I find the concept really electric and intriguing. Who do we become when we are faced with some of life’s more challenging problems and concerns, where just one step and we’re in a new world? The Longwood Players have a rich tradition of producing outstanding musicals and plays with IRNE and DASH nominations and awards in recent years. Yet something is missing in their recent production of Songs for a New World. I didn’t have a hard time figuring out the missing element; some of these actors lacked a connection with their material and, while vocally outstanding and impressive, some struggled under the weight of telling about the compromising decision-making process and the effect their choices have on their life.

Songs for a New World was originally staged with a mere four actors telling over fifteen different stories through solos, duets, and ensemble numbers. Director and music director Jason Luciana expanded this cast to six for his production. I was willing to suspend my doubts, especially since some productions have achieved greater success and harmony through adding more voices. Unfortunately, the opening fell a little flat for me; I felt like they doubled-up the wrong parts and I missed some of Jason Robert Brown’s key harmonies. However, this cast boasts some impressive vocal talent. There wasn’t a weak link among them, and my chief complaint was under-utilizing some of my favorite voices and personalities in the cast.

Man 1, played by Kevin Hanley, sure can wail. His vocal range is particularly impressive while his command and control is even more stunning. However, Hanley is so swept up in the music that I miss any character or personality in his performance. He sang a few of the more well-known numbers, including “Steam Train” and “King of the World”, yet neither role hit the right note for me. He lacked any real connection with the audience and most of this show is this connection. The storytelling was lost in Hanley’s performance.

Equally disappointing, for similar reasons, was Woman 1, played by Renée Saindon. Saidon is a legit, classically training soprano and, again, musically, Saidon is at the top of her game with cool consistency in her vocal performance. Yet, there is more to Songs for a New World beyond the notes on the page. Like Hanley, she is given some of the show’s most iconic numbers, “I’m Not Afraid of Anything”, “Stars and the Moon”, and “I’d Give It All For You”. I had trouble caring about or engaging in any of these songs, despite being a huge fan of all three independent of the production. While Saindon is and would be a stellar cabaret performer, something more is required to pull off a song cycle. Saindon is capable of carrying a character, but that character never grew throughout each song. This static enactment limited Saindon’s full potential onstage, and stifled most of Jason Robert Brown’s storytelling.

Fortunately, the other cast members carried the show in unexpected ways. I’m not a huge fan of “Just One Step”; I think the song’s a little one-note for me, and I’ve rarely seen an actress tackle all of its complexities. Miriam Cross, as Woman 2, however, did a splendid job, providing just the right unnerved and nervous energy to succeed. Her real shining moment was in, ironically, the boring “Christmas Lullaby”. What a voice! What a waste by giving her an actor’s nightmare in “Just One Step” and an audience member’s boredom in “Christmas Lullaby”, but Cross exceled. I hope to see more of her; I found her solos in ensemble numbers, particularly the sweeping “Hear My Song”, to be astoundingly good. I think she was wasted in this performance, but it’s extremely difficult to divide the song cycle with six actors.

Equally dynamic, yet under-featured, was Man 3, played by Michael Gallagan. His “The World Was Dancing” was charming, moving, and an excellent play of character, especially opposite Cross. Additionally, his “I’d Give It All For You” was warm, though a little flat in character for me, but he was also paired with Saindon, who didn’t deliver as moving of a performance as Cross. Overall, Gallagan’s performance was particularly strong, especially his rich lyrical baritone and acting abilities. I wish he was given the opportunity to sing “She Cries”, though Man 2 (Michael Chateauneuf) did a passable job with that particularly beloved song. Something was missing from Chateauneuf’s performance, though, and I still struggle to pinpoint where he lost me. Perhaps it was the moving from moment to moment; I’ll return to the importance of the moments later.

And I’m finally at the star of the show. Unexpectedly exceeding expectations was Woman 3, played by Katie Pickett. My expectations were exceeded solely because of the limited songs given to Pickett. She was stuck with “Surabaya-Santa” and “The Flagmaker, 1775”, two songs that I’ve glossed over numerous times on the soundtrack. After listening to Pickett’s rendition of both songs, I won’t be hitting next on my iTunes anymore! She is a powerhouse performer, knowing exactly where to emphasize, both as a singer and actress. My eye was drawn to her in the ensemble numbers, and not in a bad way. Her energy never distracted, but only added to this production’s spark and drive. I felt she was under-featured and under-appreciated, and I can’t wait to see her in a more featured role in the future.

My last concern was Luciana’s direction. While he brought out exceptional vocals from his talented cast, I think consistently he missed the moments in each song of choices and change. These are called “buttons” and, to use a legal phrase, “I know it when I see it”. A button is a clincher; a moment at the end of a scene or song that pops for the character and audience. An example of a missed opportunity is the ending reflection in “Stars and the Moon”, but Jason Robert Brown uses them consistently in Songs for a New World and I think this artistic choice is what makes the song cycle so unique. While many songs in many different genres feature “buttons” (a contemporary example may be “Call Me Maybe” and its grossly popular ending), the consistent use of choice and change in Songs for a New World’s song makes “buttons” an interesting and necessary directing decision. The absence of these “buttons” drives down the quality of the characters and the importance of their songs and choices.

Lighting Designer Erik Fox should, and most likely will, be nominated for area theatre awards for his work on Songs; his lighting balance and colors perfectly set the mood for each song and the change in the characters. The set by Set Designer Brie Frame was workable and provided much-needed levels, but nothing amazing (though in her defense, the set doesn’t have to be visually stunning but merely allow the characters to tell their story). The production elements were passable but, aside from the lighting, barely noticeable, which is a good thing.

Overall, I found the production a tad underwhelming, but mostly because some of my favorite songs weren’t played to the same acting degree that I expect. The production runs until May 12, but Longwood Players’ next season looks particularly promising with productions of Rock ‘n Roll by Tom Stoppard and the rarely-performed Chess with music from ABBA and lyrics by Tim Rice.