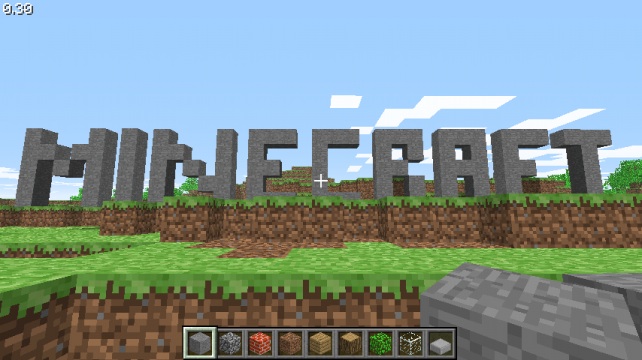 I took a while off from Minecraft to play Skyrim, so of course I had to revisit the game to remember why I love it so much. The problem is, now I can’t stop digging to write this article. I should say, before I go into my personal opinions of this game that I’ve been acquainted with it for a lot longer than I’ve been playing it. I watched my housemates playing this game for months, watched them dig for hours, and watched them die at the hands of green exploding… monsters. I couldn’t see the appeal. Then I played it. And played it, and played it. You start out in a blank world: snow and forests, cows on a plain, sandy beaches, or impossible mountains. There is no tutorial, no quest-line, and no hint of what your purpose is in this massive blocky world. Your controls are move, jump, and punch things. You have nothing in your inventory and no introductory cut-scene to tell you who you are. Then you punch things, cows, flowers, trees. Suddenly you have logs, so you make wood, so you make sticks, so you make an axe. Progress is the name of the game.

Notch, the creator of the game, started this simple yet brilliant project small and it has grown to incredible heights. The game spent a long time in Alpha and Beta, garnering a huge number of fans who knew the game was a working project and have had more fun watching it grow. Animals can be bred now, which led to the invention of the cutest baby animal blocks I’ve ever seen. You can brew potions, enchant your weapons, and create computers with red-stone (electrical) wires and circuits. There is even a mirror world to The Nether called The End where you can find an Ender Dragon and win? the game. Because there are literally no rails on this sandbox, you can get a pet wolf and go adventuring – exploring the beautiful (I know, I know, it’s all blocks, but sometimes they’re really prettily arranged ok?) blocky landscapes, build castles and farms, or mine to the bottom of the world and make diamond everything (I only need one more diamond to make an enchanting table!).

The reason I spent so much time playing is because it’s immensely satisfying to see a building go up when you mined, planned, and set every block of it. My only qualm with this game is calling it a game. It really does feel more like a toy. I’m not sure where the dividing line lives, but I’m pretty sure Minecraft built its blocky castle within spitting distance. With all the new updates, the ‘ending’ of the game does try to contextualize the world. It implies that the player is dreaming or stuck in Purgatory, but I’m not sure if this really affects the game/toy since you only get this information in a text block once you finish. It’s like learning that Braid is actually a metaphor for the atomic bomb – it’s really cool and intellectual but doesn’t have much impact on the player.

I absolutely recommend picking up a license for the game. It used to be easy to run well, but the updates have made the strain on your computer significantly heavier – especially if you want the pretty texture packs or like to fill you underwater castle with redstone machines. That bums me out, but in return Notch added Ocelots that you can tame with fish to become house-cats. Now I can have a pet dog and blocky pet kitty, awesome!