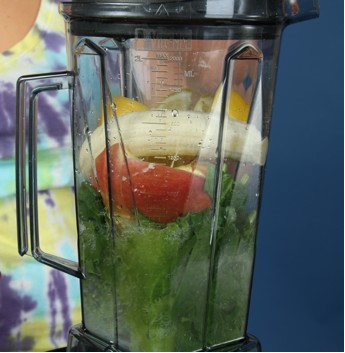 Green for Life by Victoria Boutenko

Maybe it’s in the water here. I mean, mostly I’ve read that Los Angeles water is filled with parasites and toxins, but maybe it’s actually filled with a desire to spend one’s life eating strangely colored smoothies based on a vegan, plant-based, raw diet. I don’t know.

Anyway, about two months after my move to Los Angeles, I just gave in. I started running. I learned how to cook. I dropped Taco Bell entirely from my diet.  It’s been a struggle. But I avoided taking drastic steps. Then I read Drop Dead Healthy and realized that despite diet, exercise, and constant reading about the dangers of both sugar and sitting, I was still missing a whole bunch of crap in my diet.

So I picked up Green for Life, one of those books written by a raw diet enthusiast who claims that eating raw food can cure everything from gray hair to cancer. There’s a lot of dubious claims in the book, as with most nutrition books, mainly because nutrition is a field entirely in its infancy and with a lot of people desperately trying to make money off of it.  There’s science that backs the theory that carbohydrates=death. There’s also science that says we need carbohydrates to function.

But just because there is confusion doesn’t mean there isn’t any good advice out there. The best part of Green for Life comes in Victoria Boutenko’s first chapter, where she explains that no amount of scientific evidence or testimonials should cancel out what your own body is telling you. Her whole book may be an argument for why green smoothies are an awesome addition to the Standard American Diet, but she seems confident in her argument that this is only a motivation to check them out and see if they make you feel better. If they do, great. Buy a really good blender. If they don’t, well you still probably shouldn’t subsist on French fries and hamburgers alone.

So what exactly is a green smoothie? It’s basically a bunch of stuff you never thought you’d drink, like kale and spinach, blended together with water and other vegetables and fruit. Boutenko’s whole point is that our current diet undervalues greens (like spinach, kale, chard, romaine lettuce, dandelion greens) by simply lumping them together with “vegetables” (which can also include corn, which is really a starch, or cucumbers, which Boutenko calls a non-sweet fruit). On top of that, our daily recommended allotment of vegetables is dangerously low. She also makes a compelling argument for paying attention to the PH balance inside our own bodies, which she says can result in gas, heartburn, and even cancer. She ends the book with some interesting recipes, sorted by taste, that the reader is supposed to try out.

As I said, I’m not 100% sold on the science of Green for Life (although I do think that nearly any nutritionist in the world would argue that increasing the amount of greens in our diets is a good thing), but I liked Boutenko’s outlook. Far from arguing that the only way to health is through a strictly raw and vegan diet, she argues that you can improve your health and outlook just by adding in the green smoothie. That’s good news to the lazy among us, who would love to be able to add things to their diet rather than taking the things they love away, but Boutenko also makes the case for total body health and how drinking a smoothie a day can help inspire you to want to improve the rest of your health.

Overall, Green for Life was an interesting, straight-forward look at a specific subset of the raw food movement, and the smoothies are pretty good (if you can get past the slightly bitter taste that blended up greens leave in the mouth). I liked her matter-of-fact style, and the fact that she tried to enumerate the science between her extreme dietary recommendations, and I’ll be following her advice to try out green smoothies and see how they make me feel. It’s a good starting point for people looking to increase the amount of healthy stuff in their diet, even if they’re not ready to make the full plunge into AJ Jacobs-like “healthiest man alive” obsessing.