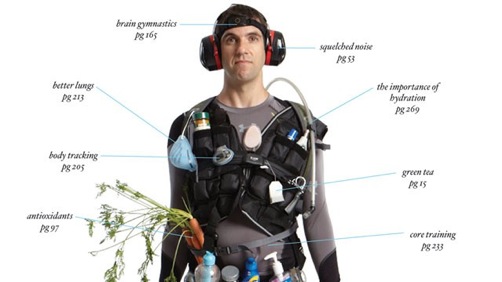 A.J. Jacobs likes to use his life, body, and family as a template for thoughtful experiments on a myriad of issues. His past two, bestselling books were The Know It All, in which he attempted to read the entire encyclopedia from A to Z, and The Year of Living Biblically, in which he decided to try and live by all the rules of the bible in order to gain some sense of agnostic spiritualism. He also published a book of essays called The Guinea Pig Diaries: My Life as an Experiment, which makes this theme all the more explicit. For A.J., the best way to explore an issue is to give yourself over to it completely, social life and marital bliss be damned (as was the case when he decided to try out Radical Honesty).

I loved all of his previous books, and really enjoy his conversational and intelligent writing style. So I was really excited to pick up his new book, Drop Dead Healthy: One Man’s Humble Quest for Bodily Perfection. In it, he follows the typical Jacobs pattern of tackling an issue by going to all the possible extremes and learning as much as possible. Here, he would explore the murky waters of modern nutrition and fitness over a two year period in which he tackled each major part of his body one by one.

In contrast to his previous books, which were cute and semi-ironic, distancing themselves from the extreme lifestyles they were exploring, the issue of health requires Jacobs to drop his detachment and give himself over to the sinking middle-age realization that he is getting older and needs to work on his body if he wants to continue to live the kind of life he has. It’s a much more sincere desire than, say, wanting to be the smartest man in the room or wanting to grow a beard and wear Jesus robes in public. It comes from a place of legitimate fear, too, of ageing and of screwing yourself out of years of your own life.

The book has to operate under the confusion that clouds a lot of modern health writing. The problem is we really don’t know that much about the way that our bodies operate. Conversely, the problem is we know WAY TOO MUCH about the way our bodies operate. In other words, for every person who switches to being vegan as a healthier lifestyle, there’s someone else going on the Paleo diet and completely avoiding fruits and most vegetables. Most experts, however, agree on a few simple ideas: we need to eat less and move more, and our sedentary lifestyles do not mesh with the way our bodies operate.

As AJ explores his body part by part, he’s astonished by how many things are wrong with him and all the conflicting advice he gets from experts. There are just so many things that one needs to do in order to be, as AJ keeps saying, “optimally healthy.” Avoid toxins. Eat leafy greens. Exercise your fingers. Exercise your brain. Hold hands with your family. Run. Don’t Run. Stretch. Don’t stretch too much. Avoid germs. Avoid anti-bacterial handsoaps. Eat fish. Don’t eat fish. One of the real strengths of the book is the way AJ refuses to get bogged down by all this conflicting information. He’s very straight forward about his own biases (he’s been a “flexitarian” for most of his life, avoiding red meat and poultry), and lays out the information and the conclusions he chose to draw from them.

The strongest parts of the book, though, come from the personal anecdotes that float around the information. The story of his 90+ year old Grandfather and how he made it into a semi-healthy senescence. His well meaning, hippie aunt who avoids all toxins. Aj’s own personal struggles to figure out a diet and exercise routine that doesn’t take over his whole life. Fitness and nutrition are serious problems that it is essential to take seriously, but they’re also really goofy. Through his human stories, AJ combines useful information with a sense of the absurdity of it all.

And it is absurd. In the end of the book, AJ experiences the death by cancer of someone who did everything right, who spent her whole life trying to live as cleanly as possible. It brings him back to a question the previous version of AJ (the one who ate Cheetos and avoided gyms) always snidely used to combat the fitness trend: what’s the point? If nearly everything around us is trying to give us cancer, and even the most careful and sustained of efforts can’t hold off the tide of the inevitable, then why waste our time in gyms and measuring out portions? Why not eat six Taco Bell burritos and then wash them down with a half gallon of soda?

Jacobs does a good job of explaining the tangible ways that fitness and nutrition improved his life, counteracting this idea that somehow they are the punishment we must go through in order to live a longer life. He also makes a good argument for moderation in most things, even with our obsession with health, by exploring the new phenomenon known as “orthorexia” (or an unhealthy obsession with being healthy). In his trademark style, Jacobs provides a good beginners course for people trying to make positive changes in their lives without ever feeling preachy. Plus, the book is just plain fun. In other words, although he wouldn’t approve of this metaphor because it encourages us to think of sugar as a reward even though it’s slowly killing us, AJ Jacobs has made a book that serves as the spoonful of sugar to help our nutrition and fitness medicine go down.