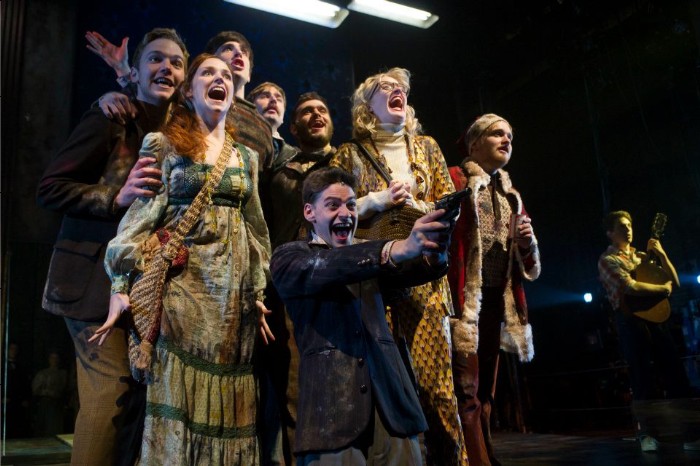 Assassins Misses the Mark, but Gets the Job Done

Timing is everything. The Boston University College of Fine Arts showcased some astounding talent in their recent production of Assassins by musical genius Stephen Sondheim. Concluding their year-long “Keyword: Violence” festival, the CFA program explores America’s famous (and not so famous) assassins through their stories and motives, but, more importantly, the show offers a compelling conversation in the election year about our responses to American life. This production struggles under some mediocre casting, but overall, the show shines with brilliance and thought-provoking discourse.

The set is a unique backdrop of a metal American flag. The many entrances and exits onstage make for particularly good blocking. The most interesting part is how dulled, worn, and vicious the flag looks, especially from far away. Designer Kamilla Kurmanbekova does excellent work, especially with help from lighting designer Ian King. Together with costume designer Evan Prizant, the audience views a splotched, used, and questionable American society. Their concept is expertly executed, and provides a lens to observe the musical’s plot and message. The only bright colors come from our storytellers, the Proprietor, played with perfect demeanor by Matthew Dray, and the Balladeer, played with quirky resonance by Evan Gambardella. I enjoyed the Proprietor’s costume the most because of its strong reminder of the American dream, an important recurring theme in Assassins. Unfortunately, the Proprietor is unmemorable, despite a potentially strong opening number; he fails to deliver and quickly fades into the background. Luckily, I enjoyed this unintentional interpretation. The Proprietor is not the focus of the musical, nor should he be its star player.

Director Jim Petosa’s production of Assassins seems to re-imagine the Balladeer as the central character, featuring the Balladeer in the background of more scenes than typically intended. While this choice is strong, I think Gambardella’s portrayal of this iconic American figure misses the mark. Gambardella is charming and quickly wins over the audience’s trust and confidence with his quirky mannerisms and bright personality. Yet, the camp goes a little too far. His brilliance dazzles farther than it should and noticeably detracts from many central scenes. I found him ridiculous in some musical numbers, but he carries the show in numerous numbers with his voice, movement, and grace. I would enjoy seeing him featured in another musical, perhaps Jack in Sondheim’s Into the Woods or the Emcee in Cabaret; he was that good, just not good as the Balladeer. Oh, and before I forget, the lack of guitar is almost shameful; this production tried to get around Gambardella’s inability to play guitar by having him listen to it? For shame.

Many of the other leading characters failed to rise to Gambardella’s star quality, further making the Balladeer stand out in most ensemble numbers. Giuseppe Zangara, played with angst by Harrison Brian, was too much for me, somehow hitting the caricature rather than the character. Leon Czolgosz, played with some consistency by Zachary Clarence, seemed star-struck onstage and his passion fell flat, despite many comments about his zealous demands for reform. Samuel Byck, played with staggering sadness by Leo Stagg, seemed overwhelmed by the confused and mentally unstable lower middle-class man; his attempts at comedy missed the mark, though I admire his commitment to the character and his interpretation.

One of the leading, and more notable, characters in Assassins is John Wilkes Booth, played with charisma and determination by Christiaan Smith-Kotlarek. A quick Google search confirmed my guess that Smith-Kotlarek is a trained opera singer. He has a stunning and captivating, unique voice. His opening scenes were underwhelming, especially given that Booth’s history is so memorable, but Smith-Kotlarek is riveting in his ending scenes. While he kept my focus, I didn’t really invest in his willingness to convincing Oswald to commit the crime of the century. I think Smith-Kotlarek’s portrayal is passable, but nothing akin to the Tony-winning performance of Michael Cerveris as Booth.

That brings me to my favorite characters. I’ve seen Assassins about half a dozen times in various venues and with varying levels of professionalism, so I admit to being a little opinionated about the show and its characters. With a large ensemble cast, the actors have a difficult job of making themselves memorable. Oddly, the most memorable for me is Charles Guiteau, played by John Scala. Scala exudes the perfect amount of confidence and off-kilter personality necessary to carry his role. While I found his singing a tad underwhelming, especially given the prior productions I’ve seen, his commitment to his role was captivating and made his downfall actually heartbreaking.

Equally good, surprisingly, was John Hinckley, played by John Zdrojeski. I have never seen an actor take on Hinckley so well, especially given his awful dialogue. His voice is rich and stunning on the iconic “Unworthy of Your Love”. His scene would be nothing, however, without “Squeaky” Fromme, played with incredible talent and knack for comedy by Casey Tucker. Talk about a committed actor. Tucker takes crazy and makes it so damn cool that you can’t help but believe her conviction and commitment to Charlie (yes, THE Charlie Manson). Though I found her singing a little underwhelming, especially given how famous “Unworthy of Your Love” is outside of the musical’s plot, I couldn’t help but appreciate her strong acting throughout the song and the play. Her partner-in-crime (pun intended) is Sara Jane Moore, played with maturity by Melissa Carter. What a firecracker! Her performance is spot-on brilliant, and her scenes with Tucker are some of the play’s most memorable, thanks in some part to the excellent dialogue, large part to the actors’ commitment to their respective characters.

I would be remiss if I didn’t acknowledge the ensemble. While sparingly featured (a product of the musical’s construction rather than any directing decision), they captured the energy and life of the American people. None of the ensemble did this better than Emily Zickler. Her stunning solo in “Something Just Broke” is one of the most heartrending songs I’ve heard in a while. Her brilliance comes not from force, but from conviction and her energy comes from a willingness to move forward despite the change in our country’s history; these emotions are especially felt in today’s society. Her ability to channel these emotions in an often underappreciated solo is breathtaking. The girl needs to play Cinderella in Into the Woods and deliver a heartbreaking rendition of No One is Alone (apologies for all the Into the Woods/Assassins parallels).

While the production is hardly the best Assassins I’ve seen, many of the actors’ performances are just good enoug to that make it worth seeing. Any negative commentary on individual actors’ performances is based on my long-held opinions on the show, and didn’t detracts from the warmth, energy, and verve in the show. The cast and crew does a brilliant job of telling a story that deserves to be told in today’s society and features some stunning performances along the way.