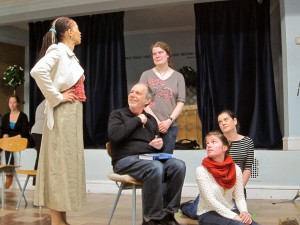 An exciting adaptation was featured in Somerville, Massachusetts for the past two weekends. Elizabeth Hunter, a 2011 My Theatre Award nominee for her work in Equus, wrote and directed an original stage adaptation of Jane Austen’s popular novel Pride and Prejudice. Produced by Theatre@First in the stunning renovated Somerville theatre, the production showed much promise. Unfortunately, it failed to live up to expectations, with some notable exceptions.

Hunter’s script features most of Austen’s popular quips from the original novel, and it’s clear she intended to stay true to the story’s text. Thankfully, almost all of Mr. Bennet’s lines remain, though a few characters were cut to accommodate the shortened adaptation. I missed only Kitty—I worry that Hunter underestimated this character’s seemingly innocuous presence in the novel. Many other stage adaptations keep her as a sidekick for Lydia, and I agree. Especially when Hunter chose to include a silly Miss Anne de Bourgh, I think she could have sacrificed a few of the other Bennet sisters’ lines for Kitty’s sake. Moving along, Hunter tried to write her own dialogue to fill in some noticeable gaps from the novel’s exposition. I don’t particularly like these additions though I can’t argue with their necessity; I think another draft and staged reading would have polished the dialogue, especially between Jane and Elizabeth. Perhaps Hunter’s boldest move is the social whirl she creates onstage with the instantaneous passage of time. Scenes move fluidly into one another and months become moments of waiting. I appreciated her strong storytelling—more on this below—but I worry that something was lost. I think future drafts can help solidify the same feelings of anticipation from Austen’s day while keeping the heightened urgency needed for a stage adaptation. Overall, her script is well thought-out and very accurate to Austen’s original.

Her cast, however, faces an insurmountable challenge in portraying Austen’s larger-than-life characters. The actors seem to wobble between realistic portrayals and caricature. This dichotomy is anything but pleasant, and down-right confusing. At the heart of the story is the Bennet family, which includes the widest range of acting abilities. Mr. Bennet, played with cheek by Doug Miller, is excellent and perhaps even underused because he provides some of the most-needed one-liners, while his wife, Mrs. Bennet, played with verbosity by Dayenne Walters, could use some focus. Walters attempts to create her own hysterical interpretation of the infamous gold-digging mother but strays too far from our modern conception of the classic role, fully landing in the satirical category. The daughters, however, never reach this extreme, no matter how “silly” they are supposed to be. Mary Bennet, played with groundedness by Lisa Sturgeon, is perhaps too realistic, but has some wonderful moments on-stage even with her limited dialogue. Jane Bennet, played with blasé melancholy by Tegan Kehoe, is too unaffected by the play’s dialogue to develop a clear personality. In fact, her character is so bland that I wondered what her and Bingley, played with some charm by Jared Hite, could possibly discuss in their quiet asides. The star of the family, surprisingly, is Lydia Bennet, played with star-quality by Melody Martin. Martin picks her moments with care, and bursts with energy and life that is perfectly timed and extremely necessary. During a sluggish Act II, she carries the show’s plot in ways that few of the other characters manage.

Other supporting stars include Charlotte Lucas, played by the extremely under-utilized Jacqueline Bennett; Caroline Bingley, played with subtly and craft by Leslie Drescher; and Mrs. Gardiner, played with vivaciousness by Renée Johnson. While others may enjoy J. Deschene’s Lady Catherine de Bourgh, I felt the actor missed the mark on this iconic character. With such antecedents as Dame Judi Dench, I think the role deserves a little more respect. I’ll agree that the role did add much-needed humor in a rather dull Act II, but given the role’s history and the novel’s focus, I think the portrayal detracted more than added, especially for the production’s Austenite crowd.

And that brings me to the leads. Elizabeth Bennet, played with earnestness by Brigid Battell, struggles under a lack of star quality. It’s a difficult quality to explain, but I’ve heard it called “The IT factor” and Battell just didn’t have it in this role. For an audience whose sole focus is on Elizabeth’s story, we’re a little lost most of the time, jumping instead to focus on more dynamic characters like Martin’s Lydia or Drescher’s Caroline. Battell generates good chemistry with each and every character, an important quality, but her most notable relationship with Mr Fitzwilliam Darcy fails to excite. Darcy, played with a deep bass, yet repetitive speech pattern by Keais Pope, is, dare I say, dull. Pope misses many moments to relay Darcy’s complexity to the audience. It’s not until late in Act II that Pope stops his monotonous speech pattern to include some inflection. I believe Pope was trying to emulate Colin Firth’s notable turn as Darcy, but few actors, especially an American, can capture Firth’s charming aloofness. I wish Hunter had realized how incredibly dull Pope’s attempts to copy such a hit performance were and worked to create a happy medium. I think much of Pope and Battell’s chemistry could be solved in a more dynamic and nuanced portrayal of Darcy, though Battell suffers from her own lack of imagination and charm, falling more into the Keira Knightley camp than the Jennifer Ehle foray.

Unfortunately, these key problems led to a sluggish Act II, especially in the last twenty minutes. With a show running almost three hours, the later scenes could use some rewriting and some heavy polish. I didn’t care for anything after the marriage acceptances, and yet we unhappily plodded through several scenes to see how the rest of the cast reacts to the unexpected news. To the production’s credit, the scenes did zip along, thanks to a highly successful stage crew, led by Technical Director and Set Designer Jo Guthrie. I was highly thankful for the lack of blackouts, though I found it amusing how little time we spent in each location. I longed for the adaptations with block sets because I wanted to focus instead on these rich and dynamic characters. The costumes by Elizabeth Ryan and her crew are stunning, and the hair by Arwen Miller and her crew is superb. I thought Maya Attia’s dancing was overused, especially in the highly complex ballroom scenes; I would’ve liked a lighting fade so the dancers became shadows in the background of Darcy and Elizabeth’s lively first meeting.

Overall, the production features some commendable performances and an invigorating new adaptation of Austen’s classic story. The play keeps many of the novel’s original themes, but it fails to introduce any of its own. With more polish, the script might be a gem, especially in its creative use of time, but with sluggish pacing and an uneven cast, this production doesn’t shine.