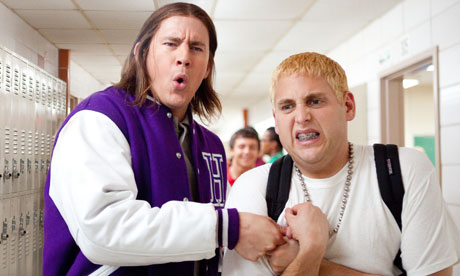 When you sit down to watch a buddy cop film you know what to expect; two mismatched partners find friendship as they solve an important case and involve themselves in each other’s lives.  The paradigms of the genre have been set, our expectations skewed, and as an audience we have been emotionally conditioned to react to certain set pieces, music, and story beats.  21 Jump Street takes all that into account and turns it on its head for a refreshing take on conventions.  The film, starring Jonah Hill and a surprisingly hilarious Channing Tatum, takes the cop conventions and thrusts the story into high school where none of those conventions are safe.

The self-aware script, penned by Michael Bacall, contains a plethora of interesting side characters who all have their own voices and sense of humor.  Almost every scene contains something to laugh at and the dialogue is sharp and smart.  While lowbrow humor is present, the fun both the writer and director were having is palpable.   It really shines in the lead actors who have intense chemistry.  It’s nice seeing Channing Tatum remove himself from the normal muscular pigeon hole and work both physical comedy and friendly moments.

If the story has a downfall it’s the pacing for the first ten minutes.  You can tell they were pressed for time in the 110 minute film and most scenes are cut so fast we cannot take hold of the story until the police officers are hiding as high school students.  Once the story settles, it lingers and lets the actors work with each other and the surroundings.

Overall, the story is goofy but exactly what you want from a popcorn summer film.  While the stakes are small in the grand scheme, the film delivers and subverts every scene you expect from a Cop film and adds high school conventions to the mix to spice it up for a demographic of 18-24 year old males.  One large critique would be how “white” everything on screen is.  There is little to no racial diversity in the film and, even when addressed by the adroit script, still feels a bit stilted.  Most people play into their stereotypes which are comfortable but lack the hilarity of a film that gets most of its jokes across by changing what we expect.