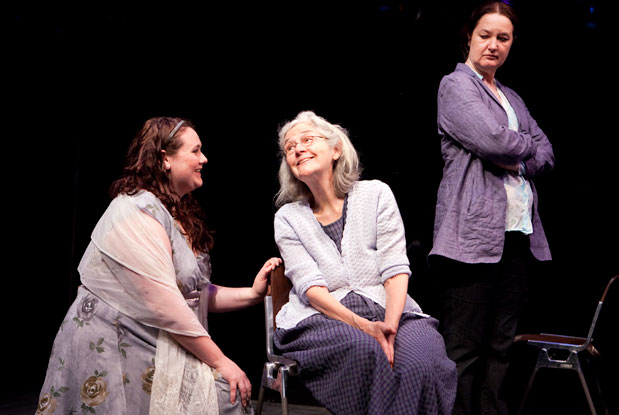 One-Acts at Tarragon and Buddies

Sometimes a one-act play can be brilliant in its low-frills simplicity (great one-man shows like Modern Love, Bursting into Flames and Ellamentary are like that). Sometimes their shortened length allows for succinct storytelling and tight pacing (particularly in intimate stories like family-centred one-acts Kim’s Convenience and Remember, Maggy?– both wonderful). And sometimes you’re glad a play is a one-act, so that you don’t have to watch it for very long. Such was the case with two one-act plays I saw recently, Was Spring in the Tarragon Theatre Extra Space and Bliss at Buddies in Bad Times.

The former, a three-person memory play written and directed by big-name Canadian scribe Daniel MacIvor, has moments of poetic greatness (as all MacIvor plays do) and fails to tell a compelling story. The trio of actresses playing different iterations of the same character- Clare Coulter, Caroline Gillis and Jessica Moss- are all excellent performers who bring great life to their characters, though they seem to exist more in alternate realities than in different periods of the one Kit-Kath-Kitty’s life. Coulter, in particular, gets a lot of laughs as the eldest version Kitty, all grumpy sarcasm and cigarette-yellowed fingers. Gillis brings a lot of grounding to Kath- the middle-aged cynic- but she feels very out of touch with the both Kit and Kitty, as though Kath isn’t the bridge between them but an alternate personality who came out somewhere between optimism and acceptance. Kit is played by Jessica Moss with her usual exuberance, though I’d like to see her attempt something darker soon. Simple direction in the confining script and itty-bitty-ness of the Extra Space seems like the only choice available, but Kimberly Purtell’s lighting design, though pretty, could have helped out a lot by being just a little bit more adventurous. The execution of MacIvor’s script is acceptable if not inspired, but the principal problem is, as it often is, with the script itself. I’ve never been a MacIvor fan and have often found that the people who like him are poetry people or actors looking for a great contemporary monologue (MacIvor writes very good monologues). There’s nothing wrong with being a poetry person or an actor looking for a monologue and if that means you’re able to appreciate MacIvor’s much-lauded work, you’re the better for it. But I find that in between those poetic, fanciful monologues, there’s a bit too much meh. In MacIvor’s work there’s a whole lot of posturing, the telling of simile stories and characters revealing their great theories on the world. But those characters hardly ever do anything. I don’t need a ton of action, but I do need the verbosity to go somewhere and Was Spring stays exactly in one place. 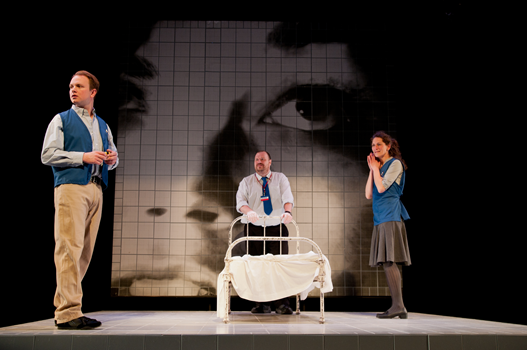 Bliss, which just closed its run at Buddies in Bad Times, was similarly a production in which a small group of people told the audience a direction-less story instead of showing them. In all fairness, playwright Olivier Choiniere’s absurdist horror story would have been next to impossible to show and much of the point of Bliss is the way in which the storytellers recount the events. Still, those events needed to be entertaining enough to be worth hearing, or, alternatively, they needed to be so utterly confusing/shocking/enlightening that the unpleasantness of hearing them made you think or changed your mind or haunted your dreams or SOMETHING. I’m generally a pretty big fan of the always-innovative Steven McCarthy and I’m not sure there was a lot to be done in terms of making Bliss a more meaningful experience. In fact, his actors are strong (particularly Delphine Bienvenu and France Rolland), the staging is as smart as its gonna get, and the combo of set and lighting design by James Lavoie and Andrea Lundy & Sarah Yaffe, respectively is actually pretty great  (there’s a giant photo of Celine Dion- so close up that she’s unrecognizable without context- that fragments when the light pierces it, and the whole thing is set in a cold, tiled room like a hospital or asylum, in a good way). Diane Labrosse’s sound design is also good, providing the production’s greatest scene, in which the characters scream out their misery while a thunderingly loud Celine belt drowns their cries. But why McCarthy chose such an haughty, uninspiring text is beyond me. The horrors of Bliss- including a graphic retelling of a miscarriage, lots of humans-behaving-badly moments of “Examine Yourself!” probing, some metaphorical dreamy gross-out anatomy bits and lots of preachy condescension about celebrity worship- aren’t as horrible as the play seems to think they are (I mean, they’re HORRIBLE, but these are modern times, Trayvon Martin got shot for buying Skittles and we heard about that on the PG-rated, populist, goofy Daily Show, so we don’t need Bliss to teach us about the underbelly of humanity). I’m not easily shocked, so whatever emotional response Choiniere was planning just didn’t happen, and the play’s conclusions weren’t innovative enough to make me want to dissect the pretentious absurdism for intellectual minutiae. Though I enjoyed moments of Bliss (particularly the exuberant fan-love opening about a Celine Dion concert experience and that great screaming/Celine sound extravaganza), I got very little from it. There were quite a few moments of laughter over the course of the play, but they were sporadic and only one person was ever laughing at the same time- as though no one was ever quite sure what was a joke. That phenomenon, at least,  was interesting enough to ponder after the fact (an audience so uncomfortable they question their every instinct? Or a play that just wasn’t quite as funny as it was supposed to be or was unintentionally funny at odd moments?). I’ve talked to quite a few people who’ve seen Bliss and read a handful of reviews, and I gladly acknowledge that my boredom seems to be a minority reaction (or I may be completely alone, I don’t know). But Bliss, in all its inaccessible weirdness and reluctance to tell a a real story instead of vignettes of metaphor, feels distinctly like one of those plays people are hesitant to admit they didn’t like. It’s full of human tragedy and artsy, intellectual nonsense that accuses the average person of being apathetic and sheep-like to the lure of celebrity, and it was created by people with measurable creative skill. So maybe I’m cold, dumb and square to not appreciate it, but I did GET it, I just didn’t like it. Bliss told me nothing I didn’t already know. I was expecting a lot more from that great brain in Steven McCarthy’s head.