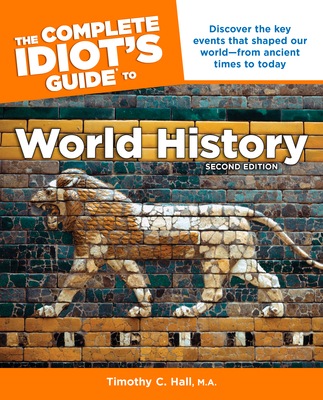 I’m not the biggest history buff in the world (not gonna lie, I rocked the heck out of AP Euro, but that was years ago, and didn’t, you know, cover the history of places that… weren’t Europe), but I deem this book pretty solidly executed. And what’s more, I enjoyed reading it/learning stuff about history/re-learning things that my long-suffering and dear Ancient Civ teacher, Mrs. Mortensen taught me a long time ago (in a galaxy far, far away…). Tim C. Hall’s book, The Complete Idiot’s Guide to World History (Second Edition) is pretty good—it’s straightforward, clear, concise (for the history of the world), and decently engaging.

Obviously, any book that’s going to try and cram the history of the world into 350(ish) pages is going to have to gloss over a couple things, but this book at least tries to give each big era its due—we get a little beginner’s biological anthropology at the start for the rise of the Homo sapiens, cover all the uber-influential Ancient civilizations, move right along into those strapping Empires, get the Medieval/Reincarnating-the-Empires/Hostile-takeover-by-other-Empires stages of all the continents (except Antarctica, which was not invited. Because this was a Homo sapiens-centric history, and didn’t spend any time at all on the great Penguin civilizations of yore. Alas), get the rise Modernity, get Industrialized, get in all the World Wars (I counted), and then we get pretty well caught up to recent history (like, real recent. Events from 2011 are in here). And there’s a lot more stuff in there. Don’t judge the book by my mangled summary. Again, this all gets crammed into 350someodd pages, so… Lots of Glossing Happens, but Mr. Hall really does do a fair job trying to wrangle the biggest/most influential bits of World History in there.

Like any piece of work, it’s got its biases, and (contrary to popular opinion), history can get mighty subjective (“This dot caused this effect,” “No, my dear fellow, THIS dot caused that effect,” etc.), so this book will not please all people. Mr. Hall and the book try to be balanced, but also admit that, you know, Europe was a big, imperial, global dominator for a while there—so it can get a little/lot Euro-centric, is what I’m saying (and it’s also pretty clear that the Complete Idiot for whom this book is written is American—not, thank God, A’muhrr’can—but still. It just assumes that even if you go into this book knowing only one thing about World History, it’s probably that George Washington was involved somewhere in there). So yes, for a serious scholar of history*, it’s got biases, and it’s not totally even… but, I mean, you try composing a 350ish page guide to ALL OF WORLD HISTORY. It’s a rough job.

*Also, if you’re a serious scholar of history, this book will bore you. It’s meant for the rest of us.

If you don’t like History (in which case, why are you even reading this review, never mind the book?), then this book isn’t really going to change anything for you. You will not experience a magical conversion. But if you like History to start with, but you’re like me (you’re interested, just… you… have trouble reading non-fiction books because they’re long… and sometimes boring), this book does a pretty good job of sprinkling in fun/interesting/weird anecdotes and quotes among the drier facts.

Example: Did you know that, as a young man, Stalin got thrown out of school for stabbing a fellow student? Probably not (although, knowing Stalin, you’re probably also not particularly gobsmacked or anything. Oh, Joseph). BUT apparently, he later became—wait for it—an elementary school teacher. GOBSMACKED (unless you had a traumatic experience, in which case, I’m sure it all makes sense now).

Silliness aside, the book’s well done. I think the only real change I would petition the editor for is the inclusion of a graphic time line. Generally speaking, this book could stand to include more pictures (oh, it’s got a couple of maps, but you know me and maps; I could always stand some more). But yeah, I really wanted a time line. And in the waaaaaay back of the book, buried deep between Appendices and Indexes, is a written chronological list of events, but I can’t tell you how helpful it would have been to have a global time line included at the end of each chapter. The book tackles World History by partitioning it into generous eras/stages of history, and then dividing that by continent/region. So sometimes you go from “Chapter 12: Those Terrible Middle Ages” (which covers Europe from 500-1500 C.E.), to “Chapter 13: America on the Eve of Invasion” (which covers the indigenous populations of North and South America, and jumps you back to 500 B.C.E.). So your sense of chronology can get a little wonky if you’re not being careful. And I mean, I don’t know that I can really think of a much better way to organize this type of book, but I would have liked a little time line to help me feel like I had a better sense of what was happening where, in relation to what was happening simultaneously in the rest of the world.

So I wanted a time line, but other than that, I liked the book—it’s informative, it’s clear, and it’s got cool history in it. This book is clearly a primer; so it’s not for the history buff, and it’s not for the disinterested, but for the casually curious, it’s a great place to start learning up on some World History.