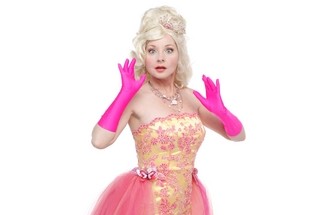 2011’s The Wizard of Oz was the best production in years from the Toronto tradition that is the Ross Petty Holiday Pantomime. Amongst the fabulous cast was Canadian comedian Jessica Holmes playing a well-intentioned but hilariously incompetent riff on the Good Witch. Instead of Glinda of the North, she was Splenda, the Good Witch of the South… and I think the story’s better that way (Evidence- her Best Supporting Actress nomination in the 2011 My Theatre Awards)

Can you remember your first experience with theatre?
I wrote and co-starred in a fourth grade play where I basically ripped off lines from John Cryer movies and made teachers the brunt of my jokes.  In one scene, our “principal” walked away with toilet paper on his shoe!!  Didn’t get in trouble though – phew!

What performers have always inspired you? Are they the same today?
Carol Burnett and the Canadian cast of SCTV, as well as Leslie Nielsen.  Today they’re still my favorites.

Comedy’s your jam, what’s your absolute favourite bad joke?
How can you tell if an elephant has its period?  There’s a quarter on the nightstand, and the mattress is missing.

What’s your favourite role you’ve ever played or production/project you’ve ever been a part of?
Ross Petty’s Wizard of Oz, I played Splenda the Good Witch.  Rehearsals were so fun – and I like how he lets us all play with our lines & improvise.

How did you get involved in the Ross Petty Panto?
Simple phone call from the agent. I was OVER THE MOON!!  Dream come true!

Did you develop the character of Splenda with the writers?
The writers and/or Ross came up with Splenda.  The only part I had in developing her was deciding to play her with earnestness.

How much of any given performance was improv?
I only improvised a few lines from the play.  Quite frankly, improvising for families is daunting, because you never want to go too risqué – so I tried to keep it clean & simple.

Were you channeling and/or mocking the iconic Glindas of the past?
I didn’t go the route of doing an impression.  That would have been a fun way to go, but would have alienated the young audience members who didn’t see the original film.

Why do you think Splenda was cut from the original story? South’s the only directional witch who doesn’t even get a shoutout.
Hmmm…she might have failed flying school a few times, and got held back a year or two.

The production called for kid-friendly audience participation; were there any comical child-induced disasters from the run?
There was one boy who was a complete pessimist.  Everything I said or offered he just frowned and refused to participate in.  The audience and I were in stitches at his complete lack of wanting to participate.

Do you have a favourite moment in the production?
I asked one little girl what her magic word was, and she answered “please and thank you.” Adorable!!

If you could pick one definitive moment in your career up to this point, what would it be?
I love hosting the Power Within shows – motivational speakers like Deepak Chopra, Dr. Phil, and even Ellen Degeneres give empowering talks, and I get to be the dorky comic relief between them.

What are you doing now/ what’s your next project?
I’ve developed my own comedic/motivational talk called Laugh It Off and Bring it On, based on stories from my book I Love Your Laugh.  I’ve started performing it and gotten (omg) standing ovations.  It’s really gratifying to take everything I’ve learned form life’s ups and downs, and embarrassments, and present it to an audience in a way that makes them feel “phew – it’s not just me!”