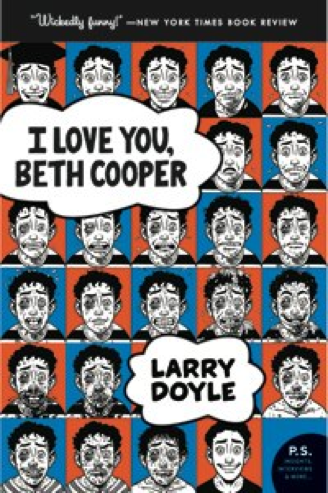 I LikeLike I Love You, Beth Cooper

I Love You, Beth Cooper is Larry Doyle’s first novel (he also wrote Go, Mutants!, the subject of my first review here at My Books). I Love You, Beth Cooper’s about a boy—Denis Cooverman, captain of the debate team and valedictorian of BGHS (Buffalo Grove High School), to be precise—and his ill-advised attempt to make his graduation speech memorable by publicly confessing his love to Beth Cooper (the head cheerleader at BGHS, etc…).  Naturally, complications ensue—Beth has a boyfriend (Kevin, a coked-up Army man with biceps the size of Denis’s face, minion-like Army friends, and a penchant for alpha-male flavored homicidal tendencies), Beth also has an offbeat (read: potentially cruel) sense of humor, and only the vaguest idea of who on earth Denis Cooverman is. Crazy stuff happens.

The book is funny, it’s got a hell of a lot of plot (a witty, smart subverting/parodying of every modern teenage coming-of-age trope packed into the events of one night), and fun/funny characters that are awesomely detailed, and manage to lull you into thinking of them as stereotypes and then surprising you with lighthearted, self-aware depth (sneaky bastards). Also (and maybe this is a comfort only to me, but) Denis Cooverman is genuine US certified geek/nerd. He collects comic books (issue #s are mentioned—attaboy), he thinks in medical terms all the time, he compulsively corrects other people, and he tries too hard to be mature most of the time.

*Tiny Tangent: I say that this is a comfort to me because, as a self-identifying geek/nerd, I am tired of characters who are classified as nerds or geeks because they can manage an easy Star Wars reference—I just think that if that’s the only proof we have that the character’s a nerd/geek, then it’s actually just lazy writing. And that annoys me.*

But fear not, my hypercritical friends—Denis Cooverman is the real deal.  And Larry Doyle is awesomely, accurately cynical about the teenage/highschool/puberty thing (on pretty much all fronts, not just the uncool-kids’ experience). Most of the stuff in the book has seeds of stuff that happened to you in highschool, or could have happened, or feels weirdly reminiscent of that conversation in geometry class that made you feel like you wanted to melt into the floor, or that time in art class when you felt like the coolest BAMF alive (except in the book it’s all much, much, much better written, and everyone has better dialogue). Larry Doyle and Denis Cooverman know shame (ack! Patty Keck alert!—She’s Denis’s secret shame. His not-so-secret shame: the fact that his name is one letter away from the word “penis,” leading to stunningly unimaginative nicknames), elation, phobias, neuroses, arrogance, and most importantly, the honest (hilarious) truth of teenage/human nature (some people will argue that these are totally different categories—I think it’s more of a larval stage/adult stage issue, so we’ll keep them together).

I Love You, Beth Cooper, is also a movie. I haven’t seen the movie, but (even though Larry Doyle wrote the screenplay to that too) I feel like I would like the movie less than I like the novel (I’ll give you a further report once I have actually seen the movie). And I really like this novel—like, likelike. It’s hilarious and witty, and full of fun and detailed character insights (which I think the movie would lose out on, unless they did weird voice-over stuff). For example, Denis’s best friend, Rich (who everybody thinks is gay, but who swears he is not) thinks of his life as a movie—depending on what’s happening, the genre changes. Without some very creative directing, that might not come across in the movie. And I would be really sad to lose all the best parts of Rich, Denis, and The Trinity.

Ultimately, I really really like this book—it’s funny, it’s smart, well plotted, self-aware, and chock full of characters I really like/can envision as real people (plus there are illustrations of the state of Denis’s face—mostly bruised, once he’s encountered Kevin—and fun quotes at the beginning of each chapter. Doyle, you had me at “Fuck me gently with a chainsaw”*). It’s a good book. I don’t love it as much as I love Go, Mutants!, but there are very, very few things in this world that I love as much as Go, Mutants!.

I Love You, Beth Cooper is a pretty great close second. Go read it.