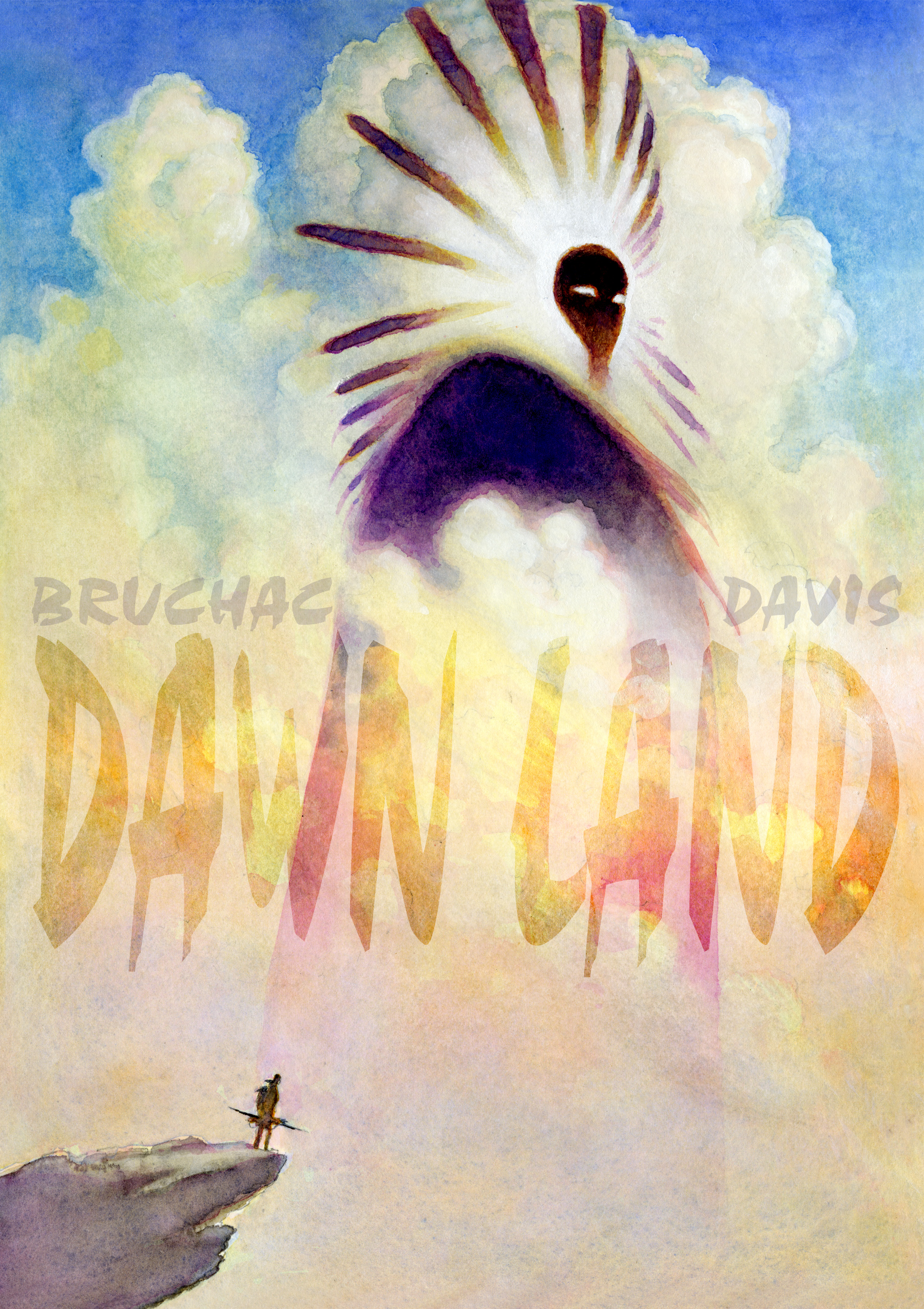 I picked up Joe Bruchac and Will Davis’s graphic novel Dawn Land because (I’m about to get real with you) the cover is frickin’ gorgeous. It’s sunset/sunrise hued watercolors (plus, it’s a graphic novel, so the cover can actually give you some hints about what’s inside/ don’tcallmeshallow/ I’mnotpremptivelydefensiveatall). I figure, it’s a library book—if the cover doesn’t correlate to the content of the story, fine. No harm, no foul. But between that and the intriguing (but not necessarily revealing) title, I was curious and I wanted to know what the heck it was about. We can chalk the whole thing up to an act of whimsy.

Anyway, I started to read this graphic novel with only the vaguest of ideas of what it was about. As it turns out, the book’s inspired by native Abenaki legend and storytelling tradition. Dawn Land is about man-eating Giants and the development of a legendary weapon. There’s also possession, mystical/spiritual visitations, and, of course, a young hero fated to fight the forces of evil and save his people in aboriginal America. It’s a good, simple hero story—but the plot itself isn’t … uber gripping. Personally, I kept reading Dawn Land because of the art.

Davis (the illustrator) does a beautiful job. The art is Gorgeous. It’s black and white on the inside (which is kind of sad, just because I wanted to see more of what Davis would do with color), but the ink-wash-esque illustrations, with their elegant, flowing lines tell the story lyrically, and make it hard to put down the book. Every line has the feeling of smooth, dance-like motion in it. And there isn’t a lot of dialogue in this book—for the most part the story’s told by the art. You can “read” the art so quickly that once you’ve started Dawn Land, it’s hard to put it down (well because the next bit looks like it’s going to be interesting, and this part has already been going so fast, etc, etc, etc…. when did it turn into 3:30am?)

Obviously, the art was a huge part of my reading experience with this book (and, frankly, if the art wasn’t so beautiful, or was knottier to interpret or something, I probably wouldn’t have kept reading). Which is why, I’m not gonna lie, I was a little confused when I realized that Dawn Land (the graphic novel) was based on … Dawn Land (the novel novel by Joe Bruchac).  It’s hard for me to imagine all of that art being replaced by words—I wondered if it would feel the same (probably it wouldn’t). Also, in Dawn Land The Novel Novel there’s apparently a whole bunch of other through-lines (like pseudo-telepathic man-canine interactions, probably more about Our Young Hero’s love entanglements—of course there are love entanglements, he’s a Young Chosen Hero, it’s how they roll. Look, at least he doesn’t mistakenly kiss his sister. Yeah, I’m looking at you, Luke) that weren’t in the graphic novel. And quite frankly, the graphic novel’s plot is so streamlined (we’re talking just absolutely whittled down the to barest essentials of plot) that there’d have to be. Now, I haven’t read Dawn Land The Novel Novel, so this is all just speculation—maybe I’d love it. I dunno. But it sure as hell would have to be radically different from the graphic novel to sustain the word count of a Novel novel, and I just have trouble imagining it.

In the end, Dawn Land’s a fine graphic novel. It’s not spectacular—it doesn’t have the complexity and nuance that you see in the very best graphic novels—but it’s got a classic plot, and casually beautiful artwork, and at the very least, it won’t take you much time to get through it (so even if you finish it and you’re not the biggest fan, no real time lost). I wouldn’t run out searching for it, but if you stumble across it, give it a thumb through and see if it looks like your deal.

For my part, I’m going to be keeping my eyes peeled for other projects by Will Davis.