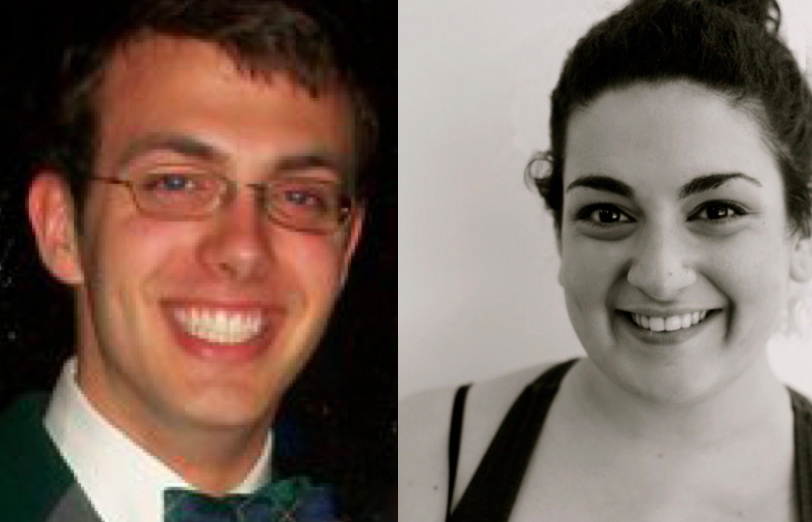 BU On Broadway’s superb production of Sweeney Todd is up for 6 My Theatre Awards in the student division, including Best Actor (Chris Behmke), Best Actress (Stephanie Gray) Best Supporting Actor (Carl Welch), Best Ensemble, Best Production and Best Best Director for Brian DeVito & Jillian Angelone. Established individually as go-to talents on and off the stage at Boston University, the combination of DeVito and Angelone made for the best production on the BU stage in a long time.

What first drew you to the directing?
BRIAN: I consider myself primarily a stage manager and a technical director.  That said, over the past four years, I’ve ventured into the directorial seat three times, only when I find a piece that really speaks to me. Rather than always bringing someone else’s vision to life, it’s nice to see what I can do with things creatively with my own style and approach.

JILLIAN: I’ve spent the majority of my theatre career as an actress, but after working as a stage manager for Hair back in 2009, I started to become more interested in the other side of things. I started really cultivating an aesthetic but I was too shy at first to go into directing. After a while, I felt that it was time for my voice to be heard and Sweeney was the perfect place to start. Like Brian said, rather than bringing someone else’s vision to life, I was excited to get started and put my creativity to the test.

Was Sweeney Todd your first production together?
BRIAN: Jillian and I have worked together several times before, first on Cabaret in late 2008 when I was stage managing. Since then we have worked in numerous capacities together, but Sweeney was the first time we shared the directing role.

JILLIAN: Though it was the first time we directed as a team, Brian and I worked together on several productions. We realized over time that our aesthetics were quite similar and that it would make for a good directing team.

What is it about the partnership that makes it work?
BRIAN: Our love for the show. Jill and I had wanted to work together for well over a year and had tried to bring other shows to the BU stage. Sweeney was always high on both of our lists, and the dark, visceral, minimalistic approach was something we both wanted out of it.  We had the same ideals for the show, but two very different skill sets which worked well together. Jillian, with a background in performance, and myself, with an upbringing in design and production, were able to marry the two together.  Nothing was neglected and our vision was carried fully throughout because of this.

JILLIAN: I absolutely agree with Brian. We both understand that the key to any good production is the director’s passion for the show—more so than the passion for directing. You have to be fully invested in the story and the characters. We both absolutely adore Sweeney. As Brian said, the reason we worked so well together was because, though we have similar aesthetics, our dissimilar theatrical backgrounds allowed us to bring different skills to the table. I was able to bring my acting skill set and Brian his technical skill set. To emulate Brian here, we really covered all our bases and tried our best to execute a well rounded production.

Who have been some of your biggest influences thus far?
BRIAN: It would be foolish and a lie to not say that Hal Prince and John Doyle have both inspired me in terms of direction. Anna D. Shapiro of Steppenwolf and Northwestern has also been inspirational for her directorial style. In terms of artistic vision, I find myself quite drawn to the design work of Scott Pask and David Gallo.

JILLIAN: As for my inspirations, Sondheim has always reigned supreme, as well as, Leonard Bernstein. I’ve always had such a love for their use of music to add depth to a character. For this production in particular, Michael Cerveris, from Doyle’s revival of Sweeney was an inspiration for me in terms of helping my actors with their characters. In my opinion, his Sweeney was just perfect.

Jillian, you usually work on the acting side of things. How did that help prepare you for directing Sweeney?
JILLIAN: I used my acting skills to really help the actors hone their characters for the show. All of the characters in Sweeney are complex and have rich back stories. I was excited to see what I could do with them as a director, as well as find creative ways to push the actors. Brian knew one of my biggest concerns was character development and my years of acting helped bring the show to where I wanted it to be, as well as, have the show be seen as more than just a visually beautiful production.

If you could direct any play ever written, what would it be and how would you approach it?
BRIAN: One show that has always been on my list to direct is Gypsy – Aurthur Laurents, Jule Styne, and Stephen Sondheim. In my opinion, one of the only musicals ever written where the book could stand on its own. To me, there is really only one way to direct it (the way it has been), but I would love to just take that show from page to stage.

Why Sweeney Todd?
BRIAN: Ever since seeing John Doyle’s production of Sweeney Todd (6 times) in New York in 2005, I’ve wanted to direct the piece. The characters and storyline are bizarrely fantastic and Sondheim’s lush score pulls the most unappealing musical theatre concept together. In terms of bringing the show to the BU stage, I wanted a return to something a bit more classical after a stretch of rock, camp, and fun.

JILLIAN: What draws me to Sweeney is the music and the tragedy—yet hilarity—of its characters. It’s multi dimensional in every sense. After you see a production of the show, it sticks with you. It’s an absolutely beautiful show with the most avant-garde storyline. I wanted nothing more than to give this show all that it had given me and do Sondheim justice.

Walk me through casting- were they easy decisions to make or did you struggle filling the roles?
BRIAN: Casting is never easy and always winds up being difficult in ways you don’t expect.  As always, casting is always a puzzle of “best fit.” Sweeney was a bit of a different casting process than usual, largely because of the fact that the style of show was a departure from the norm. A move away from the contemporary musical theatre sound to something more classic mixed things up. Additionally, roles with depth to them forced the actors to show they were talented beyond just their voices or movement.

JILLIAN: Sweeney was a difficult show to cast. Brian and I both agreed that though the show is vocally challenging, we wanted actors that can sing, not singers that can act. There’s a difference. We were blown away with the actors’ commitment to the roles and in the end we were pleased with all of our casting choices.

JILLIAN: To piggyback off Brian, we wanted to spend the majority of the first weeks on table/book work. We felt that it was something very important that had been neglected in productions past.

What were some of the biggest challenges working on this production?
BRIAN: The biggest technical challenge of the production and rehearsal process was incorporating the chair and razors into the blocking. Both were a bit awkward to work in at first and always needed extreme care for safety of the actors and crew members. In addition to that, the style of music also proved difficult to learn, especially for full cast numbers like “God, That’s Good” and “Miracle Elixir”. Much time was spent drilling these parts and tracks into cast members’ heads.

JILLIAN: From an acting standpoint, I would say the biggest challenge was avoiding operatic “park and bark.” Since the show is 80 percent music, it’s easy for an actor to stand up and just sing, letting the character fall to the wayside. The actors worked hard to keep their characters constantly engaged and dynamic. It was awkward at first, but I think the actors triumphed over the adversity.

What are some of the things you brought to the musical that were unique to your production?
BRIAN: Jill and myself were keen on a dark, noir style. From the start we had a goal to really highlight the show’s Brechtian motifs and play up the Grand Guignol style. We wanted a more gothic, sharp feel than the original production.

JILLIAN: I don’t have too much to add to Brian’s response. We did a lot of research on Grand Guignol; for us it is the build up of suspense that keeps the audience engaged in Sweeney—not the blood and gore. We also wanted a more conceptual and metaphorical set design rather than keeping the show in period.

Do you have a favourite moment from the show?
BRIAN: Several. For me, there are three moments which stood out every rehearsal and performance. First in Act I, the moment in “Poor Thing” when Lovett first realizes the man in front of her is indeed Benjamin Barker. Happening in the middle of a song, pantomimed by the cast progressed the show forward. The second, at the start of Act II when the barber chair is used for the first time – exhilarating. Third, the final moment of the show when we see Tobias’ full transformation into mini-Sweeney. It’s an eerie and haunting scene that sets up for the final ballad and subsequent end of the show.

JILLIAN: One of my favorite moments of the show was the opening. I know that’s a cheesy answer, but I saw that opening performed hundreds of time and it gave me chills up until closing night.

What are you working on now?
BRIAN: Right now, in my last semester at Boston University, I’m the Stage Manager for BU On Broadway’s production of Spring Awakening in Tsai Performance Center, opening April 19th. The show is directed by Kat Pernicone, choreographed by Mia Sommese, and musically directed by Jonathan Brenner.

JILLIAN: I regret to say that I am not working on a production right now. I just started a new job and I’ve been trying to adjust to post-grad life before jumping into a new theatre project. However, I’m itching to get theatre back into my life, so we’ll see what happens in the coming months.