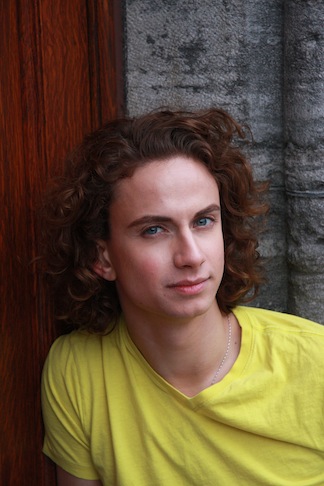 Antonio Bavaro‘s brilliantly nuanced performance in the staged reading of Puelo Deir’s Holy Tranity was a highlight of the 2011 Toronto Fringe, earning him a My Theatre Award nomination for Best Performance in a Reading. As the transgendered Gracie, Bavaro transformed completely with the help of almost no visual aids and created the most complex and heartwarmingly empathetic character on stage.

Can you remember your first experience with theatre?
Playing Skimbleshanks the Railway Cat in CATS at the gym in my french immersion K-9 school in Sherwood Park, Alberta.

What performers have always inspired you? Are they the same today?
I have always/still respect and adore Sophia Loren. I believe Jim Carrey is highly underrated as a varied and multi-talented performer. I have many great (and not so great) drag performers from Edmonton to thank for inspiring me to pursue my dream of performance.

How did you develop as an actor?
I acted as a child yearly at every school production in elementary and junior high, and I enrolled in Edmonton’s now defunct Stage Polaris in acting classes and performed a few professional productions in their Young Company. After screwing around in mediocre high school drama classes, I started performing in drag. From there, I wanted more, and enrolled in Grant MacEwan’s excellent musical theatre conservatory program, Theatre Arts. After completing that and working professionally in Edmonton for awhile, I decided to further my studies at Concordia University in Montreal, delving into the world of Theatre & Development and different styles of performative art.

How did you first get started on the drag scene?
I started to perform in queered up, lip-synched production shows of popular musical movies with a charitable drag queen society, the Imperial Sovereign Court of the Wild Rose. I was offered a job hosting Wet Underwear at Buddy’s Nightclub, and then started hosting and creating original weekly drag shows, often with live scripts. Now here I am in Montreal, the drag capital of Canada.

How did Gracie differ from your own drag alter-ego Connie Lingua?
Gracie is much more of a shaman than Connie; also Gracie was a trans woman waiting for her surgery. Gracie has much more patience than Connie, and is of an older generation.

Do you still perform as Connie or are you focusing more on theatre?
I struggle with drag vs. acting, because although I don’t truly believe in the concept, I am afraid of being ‘type-cast’ for the rest of my life. I try to keep an equal balance now, as both are necessary to fulfill my artistic needs and desires; although my drag has really been pushing the boundaries of gender performance as of late and is much more political.

In the reading at the Toronto Fringe you performed Gracie with only high heels as a character indicator. Was it tough to get into the role without full hair, makeup and costume to help you transform?
When it comes to character, your feet are the most important connection to building a foundation. As long as I have a pair of heels on, I can pretty much switch instantly into a feminine character. It’s about how you feel more than how you look, and the hair, makeup and costume elements of drag tend to add more uncomfortableness. Without it, I felt more grounded as Gracie, more honest.

What was the rehearsal process like for Holy Tranity? Did you get to work with the playwright on developing the character?
David Di Giovanni was hired by Puelo [Deir, the playwright] to form a team. [He] contacted myself, Cameron Sedgewick and Koi Santillo to perform in it. We rehearsed for a couple of weeks in Montreal, then went to Toronto for a dress rehearsal and a performance. As it was a reading, we developed the play mostly being seated; any creative idea that came up was added into the blocking. Puelo gave David lots of liberty too, in order for us to create the characters, and was extremely supportive throughout the process.

Did the script change much through the process or after the Fringe reading?
Somewhat, but not substantially. It came down to the style we presented it as.

Do you have any dream roles you think are perfectly suited to you or something completely against type you’d love to try as a big challenge one day?
I’d love to play Prior Walter in Angels in America one day or the title character in Michel Tremblay’s Hosanna. I think playing Bedard from Ionesco’s Rhinoceros would be a welcome challenge for me.

What’s your favourite role you’ve ever played or production you’ve ever been in?
Hedwig Robinson/Hansel Schmidt from Hedwig & the Angry Inch: hands down the best performance of my life, and the most demanding.

What are you working on now and what’s up next?
Right now I’m working on two shows. Firstly, I’m playing Maurice, one of the nearly nude studs in Village Scene Production’s Bain-Sauna: le Musical! , a Quebecois translation of Bathhouse: the Musical!  which we will also be doing in English, directed by Davyn Rall: that will be an ongoing project for the next year or two. Secondly, I am playing none other than JESUS in Concordia Theatre’s The Last Days of Judas Iscariot by Stephen Adly Guirgis; so excited as we’ll be performing this intrepid and controversial play inside a gorgeous, historic Lutheran church; running through April 12-15.

Do you have anything you’d like to add?
I am honoured and thrilled that my first ever Toronto theatre project was so well received! It was just a thrill to be in that great city during such a great summer with such great people…. Canadian theatre is GRRRRRRRRRRREAT!