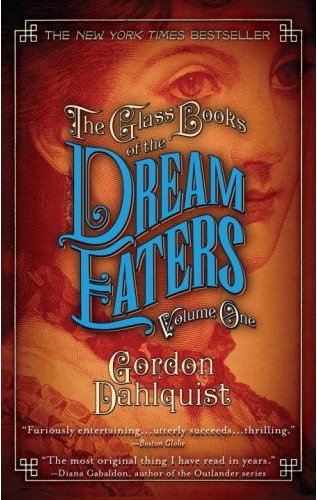 Throwbacks: The Glass Books of the Dream Eaters (Vol. 1)

Okay, I’m currently binging on books (even for me), so I ran out of books that I hadn’t read in my house (well, that’s a lie… there are medical books from the 70’s and 80’s that I haven’t read, but … I was not about to do that to myself), so I started to re-read. I found this book—Gordon Dahlquist’s The Glass Books of the Dream Eaters (Vol.1)—which I think I’d read for the first time in 2008 or something, and had pretty thoroughly forgotten the details of.

Yes, obviously, this is my second time through, this book, it’s pretty great. I’m not going to lie to you, this book isn’t going to change your life or anything (I mean, yeah, I read it years ago, but I did still forget most of it, so clearly there’s some reason to question the book’s staying power), but it’s a thoroughly enjoyable thrill-ride, and unlike most thriller-esque books, it has complicated characters that I like (and who grow and change throughout! Wheee!!!). It’s also one of those books that I would love to see as a mini-series (because a movie would be depressingly short—you just know all the good bits would get cut).

My usual issue with thrillers is that they aren’t really re-readable—once you know it’s Teabing/The Kindly Old Man/the first witness, there isn’t a lot to keep me interested in the story, you know? But this one is a sci-fi/fantasy thriller (genre-mixing is my favorite, especially if sci-fi/fantasy is in on it) with all the world-building you expect from a good sci-fi/fantasy, all the plotting ability you expect from a good thriller, and again, there’s a lot more to it than just the whodunit?-factor. And once the story got rolling, I couldn’t put this book down.

The Glass Books of the Dream Eaters is set in an imaginary Victorian London-esque city, and focuses on the intertwined journeys of Celeste Temple, Cardinal Chang, and Doctor Svenson. And it is a lush, weird, sometimes sordid, and darkly beautiful world that Mr. Dahlquist sets us down in. We are not in Kansas anymore. We are in the convoluted, debauched, steampunk-esque NotQuiteLondon of an opium eater’s dreams. And it is addicting and awesome.

The book starts out a little slow—something I mostly chalk up to a gradual build issue, and to the character arcs (gotta start somewhere, to be able to go somewhere, right?)—but once you get past page 8, the book just flies by. We start with a break up—hear me out, okay? The dumpee in question: Celeste Temple, a wealthy, but not terribly high-ranking socialite, recently arrived in NotQuiteLondon from a plantation in the we’reguessingtheCaribbean. The dumper: Her fiancé, Roger Bascombe, a mid-tier ministry official. So this is how we meet Celeste, crying her eyes out—and the narrator assures us—not quite herself. And he’s right—as the book progresses, we only ever see evidence that the hysterics we see in the beginning are out-of-character for Celeste. She pulls it together pretty quickly, and decides she needs to know why Roger dumped her, and since she has firmly decided never to deign to speak to him again, she decides to follow him to sleuth it out. Because this is a sci-fi/thriller what she finds is much weirder, fantastic, and more dangerous than the usual reasons for dumping someone (someone else, bored, notfeelin’it, etc.), and since it doesn’t count as spoiling if it’s in the title, more to do with glass books.

I do sincerely love Celeste Temple. Also, her fiancé(ex-fiance?)’s named Roger Bascombe—I don’t know if Dahlquist meant to use a Faulkner character’s surname, but … I like it. Anyway, back to Celeste. The further the book goes on, the better she gets, and not because she has special knowledge or powers—she’s just strong-willed enough and smart enough to MacGyver all of her available resources to keep fighting back against the weird mystery she finds herself caught up in. Dahlquist gives her a logic, sensibility, and emotional vibrance that’s specific to her. I’m not sure I’d be her friend if we met in real life, but getting to see her from the inside is delightful—she’s a complicated dame and a heck of a meaty character.

But she’s not the only big character—the book splits narrative time between Celeste, Cardinal Chang, and Doctor Svenson. Cardinal Chang is one of those rogues-with-a-heart/his-own-skewed-morality types that only ever seem to show up in sci-fi/fantasy novels. Don’t get me wrong, this doesn’t mean I don’t adore them, I’m just sayin’. Anyway, that’s the basics of Cardinal Chang, but his main HQ seems to be—wait for it—the library. Yes, he was manufactured to inspire my love. Anyway, like Celeste, he too undergoes some change. He starts out pretty confident of his badassery (and thus, the whimpishness of most others), but is later forced to re-evaluate some of his assumptions.  Doctor Svenson rounds out the narrative trio—a German doctor from Mecklenburg, Svenson spends a lot of time wishing he were more like our adventureman CC over there, looking at ladies (no, actually), pining for a cigarette, and unveiling bits of the mystery of the glass books through scientific observation and suchlike. He’s a bit off-kilter to me, but he’s one of those characters that you grow to enjoy, and he’s totally the Ron of this trio. And part of why I think the trio is so great is that as much as they are all trying to figure out what’s going on with the glass books and whatnot, they’re also sizing up each other, and trying to figure out how to interact with one another. There’s just this great extra dimension of very human, understated drama as each of them watches the others and attempts to figure out their niche in the group, and their exact relations to the others—who they each envy, why, who they underestimate, etc. It’s great.

Of all the many things I like about this book, what I think I like best is that Dahlquist always preserves the sense of scope. Each of the narrating characters initially believes that their story is The Story—that their experience is the sum total of everything important—but Dahlquist doesn’t restrict his story to any of their individual impressions, or realms of experience. As the book continues, G.Dahl realistically reveals more aspects of the world that are also involved in the glass books mystery. There are political levels, unexpected personal connections, the works. And of course, it’s a book, so coincidences are all contrived at the beck and call of the author, but Mr. Dahlquist does a great job making it feel like the coincidences are based on chance, and that these people are thrown together rather haphazardly, that people could die, etc. Even though my brain knows that our heroes won’t die (at least, not until the end), it feels like they could. So kudos to GD for that. And he didn’t even have to throw a little boy out a window to make me feel that way (Yeah, I’m looking at you, GRRM).

As the book continues, the pace increases, the plot thickens, our trio comes together and breaks apart, everything is super intense, music crescendos, there are gunshots—AND THEN THERE’S A CLIFFHANGER AT THE END OF THE BOOK. Motherffff. Really, Dahlquist? How could you do that to me?! Yes, I am taking this as a personal affront.

I usually hate cliffhangers. Here’s the thing though, I only hate cliffys if I a) can predict what will happen, b) didn’t care to begin with, or c) think the author is pulling a cheap shot to extend a franchise/doesn’t know how to finish the series. Otherwise I am frustrated, but mostly just filled with the need to get to a bookstore/library RIGHT. NOW. This is currently how G.Dahl is making me feel.

Moral Of This Story: Find this book. Read the heck out of it. Have the second volume on hand so that you are not distraught when you are met with the cliffhanger. Do this now.