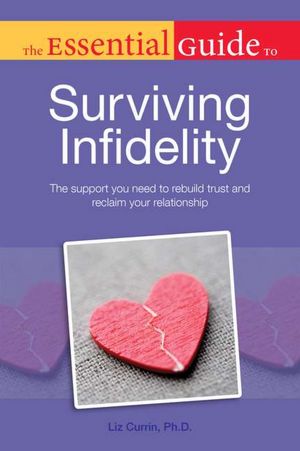 I’ll keep this short. I was not a fan of this book.

Obviously, any book that’s going to be about surviving infidelity is probably not going to be a barrel of laughs. And that’s fine. But since we aren’t aiming for entertainment value, the book should attempt, at least, to be useful and informative.

Liz Currin has a Ph.D in psychology, and is a practicing clinical psychologist in the Atlanta area who specializes in relationship issues (such as infidelity). And here’s the thing—I have no doubt that this lady knows what she’s talking about, and that she’s probably actually a very good psychologist. But she’s not a writer, and throughout the whole book you can feel her being as careful with the reader as with one of her patients—and while that kind of care and devotion is wonderfully well-intentioned, it also means that she doesn’t voice her own opinions about what to do much, which can be frustrating if you’re hoping a guidebook will provide some concrete advice on how to proceed.

When she does voice her opinions, it’s wonderful. For example, when counseling readers about deciding to stay together or divorce in light of infidelity, Dr. Currin counsels that, unless there’s a threat of physical violence or verbal abuse, people should remain in the same house and really take their time to decide—apparently about 30% of people who get divorced regret it. I didn’t know that, and I appreciate that she advocates taking the time to let the most dramatic emotions fade before making important decisions (except, of course, when somebody could get hurt). She also continually advocates seeking the help of a mental health professional—which I get as the sensible, fail-safe, one-size-fits-most option. But those are the two most concrete pieces of advice in the book.

If you or someone you know is dealing with infidelity, they certainly could go to the store and pick up Surviving Infidelity—but I might browse the shelves to see if there’s something better first.