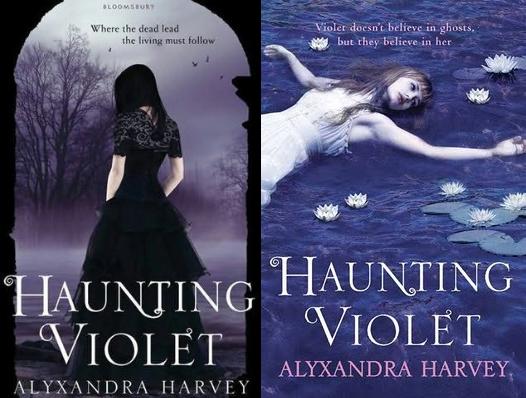 In her young adult novel, Haunting Violet, Alyxandra Harvey takes us on a journey to Britain in the latter half of the nineteenth century. It is a world full of rules and rigid roles, but one where a fascination with the supernatural is common. Young Violet Willoughby’s mother is a “Spiritualist Medium”, and enlists her reluctant daughter and an orphan boy from Ireland named Colin to assist her in the theatre that was her “sittings”. Violet’s descriptions of how they created the atmosphere and special effects to convince their customers that Mrs. Willoughby was communicating with their loved ones were my favourite parts of the early chapters of the novel. Deceitful and tricky, but very inventive, the ruses made me give the beautiful but grasping Mrs. Willoughby some grudging respect. Grudging, however, is the right word, for the sympathetic Violet- romantic, bookish, essentially honest and kind-does endure a lot at the hands of her self-centred mother.

Following some conniving on the part of Mrs. Willoughby, Violet finds herself increasingly drawn into a world more sophisticated and aristocratic than the one she was born into, and the intrigue of her maintenance of a lie about her personal past becomes complicated as she discovers she has a true ability to see ghosts and is drawn as a result into a mystery of murder and forbidden love.  We follow the unraveling of the murder in a romantic setting – a country house in rural England. As is the case with most young adult fiction, I found the love stories of the living characters a little predictable, though the stories related to the murder are not. The build to the climax is a fun read.

Alyxandra Harvey is clearly a writer engaged with Victorian Britain; the fashions, mores, values, and the customs of the day were well researched. As a result, the motives and actions of the characters are understandable and relatable. Haunting Violet is an entertaining and well-written book.