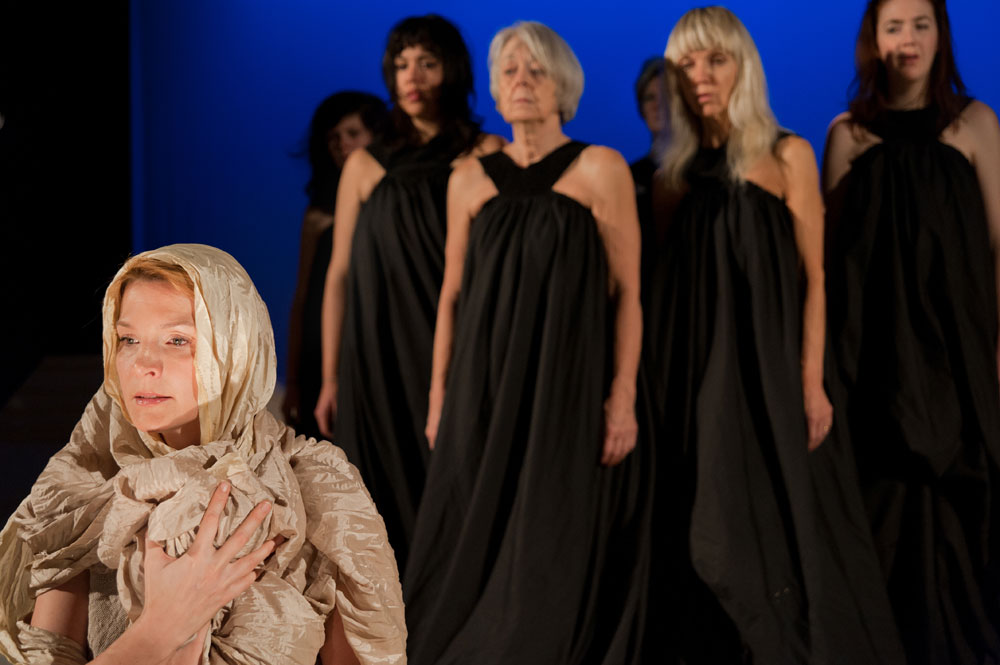 The Trojan Women, Alumnae Theatre’s latest effort, was the best thing I’ve seen from the company since 2010’s Hedda Gabler. It was not, however, as good as it should have been. With a strong cast led by a wizened Molly Thom as the beaten-but-not-yet-broken Hecuba and My Theatre Award nominee Sochi Fried as the defiantly free Cassandra (free-wheeling, free-thinking, free-feeling, free-spirited, free from rational understanding of her circumstances), The Trojan Women could have been a forceful and stirring piece of work. Instead, it was somewhat shabby and a little funny as the chorus took to the all-too-familiar trope of song and “movement” to give Euripides’ Greek tragedy a sense of artistic interpretation.

And by “tragedy”, I mean TRAGEDY. The Trojan Women, as staged by director Alexandra Seay, failed to create any sort of agency for its characters, characters undeserving of such a grim fate. The 1-2-3 punch of Euripides, adaptor Gwendolyn MacEwen, and Seay each ensured that the characters became increasingly more trapped as they traveled through the phases of production. Sure, Euripides’ story is not easy on its women, but must MacEwen have failed to give them any space to do anything but moan? Seay, in her turn, could have interpreted Helen (played as a vicious Barbie by Tara Zacharias) with more empathy or granted Fried’s Cassandra more conscious rebellion. Alas, The Trojan Women is about women wrapped in yards of fabric sitting on a paper mountain and moaning about the state of the world and the state of them in it. It’s a depressing reality.

Aside from Fried’s exuberant but brief breath of fresh air and the occasional flits of brilliance from Thom, the one bright spot was Nicole St. Martin as Hector’s widow Andromache. In a play full of hopelessness, St. Martin’s deft combination of motherly caring and fighting spirit was the sort of welcome optimism that proved honestly heartbreaking amidst the oppressive sadness of the rest of the piece. The few moments of truth that punctured the play appeared almost as vignettes, emerging for a small spot light before being smothered again by that singing chorus of darkness that threw the entire production into inescapable shadow.