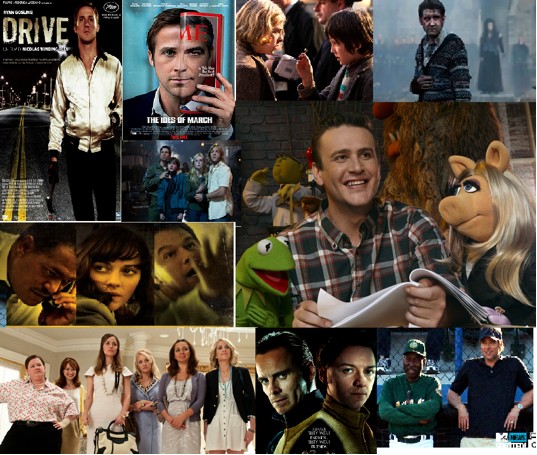 This Year in Movies

This past year in movies has felt a bit like a holding pattern, a space to get all contemplative and whimsical before the terror of 2012. Despite a few exceptions, it wasn’t a year in which tentpole summer films grabbed a majority of the spotlight (in fact, many of these failed, epically). Rather, it was a year characterized by smaller, more thoughtful films and moments, even in our biggest movies. I didn’t see everything I wanted to before year’s end (including War Horse, Melancholia, Tree of Life and The Descendants, to name a few) so, as with all “Best Of” lists, take this with a grain of salt. I struggled, sincerely, in deciding which movies I truly loved and which were just enjoyable, and since I haven’t seen a bunch of the movies that will end up in the Oscar race this year, this is more of a “movies that I want to buy that came out in 2011” list, rather than an “objectively wonderful films of 2011.” List.

10. X-Men First Class– As much a retro thriller as a superhero movie, X-Men deftly rebooted a franchise that seemed doomed for mediocrity. Plus, it unleashed the ridiculously goodlooking and talented Michael Fassbender on mainstream audiences, and probably led directly to the publicity for Shame and audiences’ expectations in seeing Fassbender naked.

9. Contagion– As much beacon of hope as disease-mongering scare tactic, Contagion is a master’s level class in creating tension, believable characters, and intriguing plot inside a sprawling, world-encompassing narrative. With across-the-board fantastic acting and the masterful hand of Steven Soderbergh behind the wheel, Contagion is a deft and eternally optimistic political thriller.

8. Bridesmaids– Bridesmaids did not prove that women could be funny, but it did put the lie to the idea that somehow funny women wouldn’t draw box office success. For that, it is rightly, if painfully ubiquitously, being touted. I loved Bridesmaids, but even I am getting sick of seeing it touted as the funniest movie ever and the cure to sexism. All of that can serve to obscure what was, essentially, a goofy thirty-year-old-woman-child coming of age story, featuring balls to the walls cameos by Jon Hamm, and one of the most disgusting scenes ever to take place inside a bridal shop. Despite all the hoopla, Bridesmaids is still an intensly funny and emotionally honest comedy about the pratfalls we make on our road to adulthood.

7. Moneyball– a fast-talking and deftly acted thriller that makes high drama out of baseball statistics, Moneyball plays on the sense of grandeur inherent in baseball and turns it into an intense discussion of talent, worth, and personal drive. From Sorkin’s script to Brad Pitt’s nuanced, quiet performance, Moneyball manages to take the best elements of sports movie genre-filmmaking and elevate them into a quiet, profound movie that instantly dazzles.

6. Ides of March– This movie is not showing up on many top 10 lists, but I thought it was one of the best acted, carefully plotted, and intriguing films shown all year. Playing on the undercurrent of cynicism and disillusionment that the left currently feels towards their political party, while never going into overt political satire, The Ides of March grounds politics in deeply human stories and feelings. The desire for hope and change are what motivates the characters in Ides of March, but the failings of human beings to live up to their own standards is what marks it as tragedy.

5. The Muppets– I am not qualified, on any level, to judge The Muppets (either the fuzzy creatures or the movie starring Jason Segel and Amy Adams). I love it all too much. Suffice it to say, then, that The Muppets justified my enthusiasm and optimism, and in return gave me a super-funny, super-sweet, and super-muppety Thanksgiving treat.

4. Drive – It’s hard to say what exactly Drive is. Is it a crime film? A psychological drama? A Steve McQueen-esque action/revenge thriller? A Romance? A stylish cipher? A little bit of all of the above, as well as the best argument for “fuck yeah Ryan Gosling” ever put to film? In the end, Director Nicolas Wending Refn has created a character at once other worldly and iconic, that feels retro and unfathomably cool. And star Ryan Gosling (who, as Kelly pointed out in her original review of Drive, is having such a great year that I hope everyone doesn’t burn out) proved he’s simultaneously Steve McQueen’s and George Clooney’s heir apparent in two fell swoops.

3. Harry Potter and the Deathly Hallows Part II– Like The Muppets, I’m not sure I’m entirely qualified to judge HPatDH2. That’s actually why it got pushed back to number 3. But with the weight of expectations, plot, and emotions piled deep on top of it, HP still feels like a character-driven film, as given to lengthy reflections on what people mean to each other as it is to 3-D air fight sequences. It’s actually the perfect example of filmmaking in 2011: a movie whose big budget and high profile are overwhelmed by its characters and reflective nature, where the apocalypse comes down to little more than a small choice made by a scared 17 year old. And it does so with all the beauty and gravitas that a fan of the book could want, while also providing a satisfying conclusion to a film franchise that has become more impressive with each subsequent installment.

2. Hugo– Martin Scorcese made a very, very personal film when he made Hugo, which is essentially a love letter to early-1900s filmmaker Georges Melies, and consequently to all of the art of filmmaking. It celebrates hand to hand filmmaking ingenuity while also showing just how gorgeous the modern tools of the trade can be. Like a lot of my films this year, Hugo is an incredibly optimistic film about dreams and humanity, that takes the often cracked soul of artisitic ingenuity and rehabilitates it. Scorsese imbues the film with so much wonder and heart that it’s near impossible to leave dry eyed.

1. Super 8– This is another film that I didn’t see on any other Top 10 lists this year. Maybe that’s because J.J. Abrams actually DID make this movie just for me, just for a film nerd who spent half her childhood trying to wrangle her friends into makeshift productions and who loves the retro aesthetic of 70s and 80s adventure films and wants desperately to be the next Stephen Spielberg. Like Hugo, Super 8 is all about movie making, though here the point is more about how damn cool and exciting it can be than its inherent magic. But along the way, Abrams made a film that feels instantly classic and personal, and it’s this beating heart that makes this movie so awesome.

SIDE NOTE: First time in years that I haven’t had an animated film in my top 10 list. I think this is less a sign that I am growing up (since at least 4 of my choices could conceivably be labeled kids’ movies), and more a sign that after a great run of many years, animation took a brief respite from excellence this year. Still, honorable mentions go to Rango and Tintin, both of which I could probably write little love letters to even though they didn’t make the final cut.