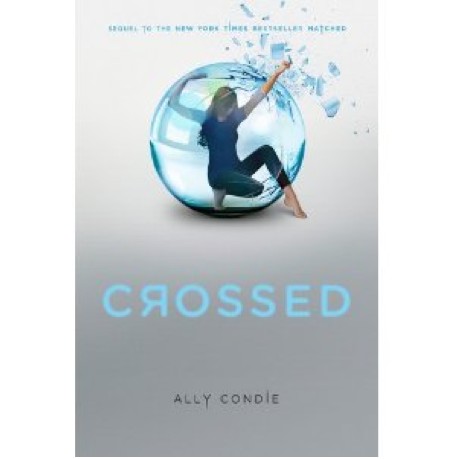 I read Matched, the first in the trilogy that includes Crossed, in a sort of breathless blur. Left yearning

as I was after finishing The Hunger Games, Matched seemed like its heir apparent. But Crossed actually makes me think retrospectively less of Matched, while still admitting that I’m definitely going to read the third installment when it comes out.

Crossed and Matched take place in a futuristic society in which The Society rules over all aspects of one’s life, from the food you consume to the dreams you have. Most importantly, they engage in odd and arcane ritual matching, pairing people with the other person most likely to make them happy. In Matched, our protagonist Cassie sees herself matched with her best friend (Xander), only to have a computer glitch reveal to her that her true match is Ky. This shakes Cassie’s faith in The Society, and leads her down a long path to discover just how crazy and fascist it is. It’s nothing mind blowing, really, but Matched was a well written, enjoyable, thematically consistent dive down this particular YA rabbit hole.

The problem with Crossed, which sees Ky and Cassie from Matched leaving the embrace of The Society and trying to figure out what they stand for outside of it, is that it’s WAY too much talking, both internally and externally, and way too little action. Nominally, a bunch of stuff happens, but the characters do surprisingly little action. And the backstory that is doled out (Ky’s full past, Xander’s role in it, the true backstory of the Rising, the resistance group) is really, really obvious, even while the book pretends that it is a great mystery worth arbitrarily doling out across chapters.

Plus, Crossed ratchets up the melodrama already present in Matched, and turns it to 11. This would be okay if the actions seemed to have consequences that warrant these heightened emotions, but they don’t. In fact, the character who leaves the book the most changed from what he seemed like in Matched is Xander, who barely even appears in Crossed.

There were a lot of parts of Crossed that I liked (hence the 3 star rating) and I still think that Condie has a great voice. She’s created really good characters in Ky, Cassandra and Xander (And new additions like Indie don’t suck either), but it’s too bad this book saw them stuck in such a holding pattern. Condie also does a good job of bringing in deep themes (like free will, love, our roles in society), but this book strands them in a bunch of rhetorical monologuing. At the end of the day, it just highlights some flaws that have been there since the beginning, and makes it increasingly obvious that Matched and Crossed are not the next great stand outs in YA literature. But that doesn’t mean they’re not fun.