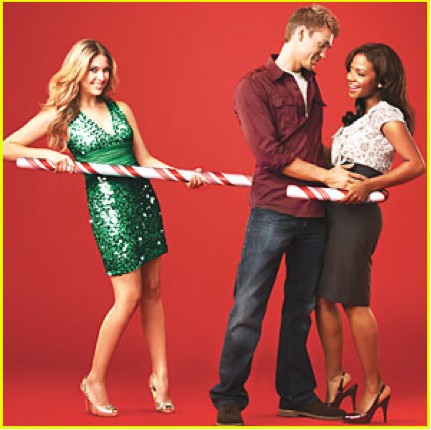 When I say to people that I love all Christmas movies, the good, the bad, and the really bad, I think that I mean it. That doesn’t mean they’re all equally entertaining or anything, but I can sit through pretty much anything if you put a Santa hat on it.
I decided to test that theory because a) buying all these classic movies on iTunes is expensive and b) my DVR isn’t full yet of all the movies I want to watch. So I sat down and watched one of those wonderfully odd Christmas films that channels like ABC Family and Lifetime put out every year, starring a b-to-z list celebrity and following the exact same hackneyed plot as a thousand other Christmas movies. I’ll probably throw one or two more of these into the mix before the end of my 24 Days of Christmas experiment.

Today’s offering was Christmas Cupid, streaming for free on Netflix and playing semi-ubiquitously on ABC Family. It stars Christina Milian as Sloane Spencer (that’s an awful name), a PR rep whose habit of “trading up” people like they’re increasingly expensive cars leaves her on the verge of losing everyone in her life. It follows the basic plot of A Christmas Carol, adds in a vodka-swilling, recently deceased ex-starlet (Ashley Benson), and somehow tries to convince me that the safe, kind-hearted romantic choice can be played by Chad Michael Murray (sorry, Chad, you’ll always be Tristan to me).

It’s a lightly comic trifle of a Christmas movie that rings pathos out of a familiar tale while making pop culture jokes that feel dated, and semi-edgy sex comedy. Milian is serviceable as the star, although she never quite gets the bad girl thing down, so her redemption comes across more as someone in need of a good talking to, rather than heavenly intervention. The whole parade of hot guys in this film are all pretty much interchangeable, but Murray is particularly badly cast.

The best part about Christmas Cupid is Ashley Benson. She plays Caitlin Quinn, a Lohan-esque party girl whose untimely demise right before Christmas sets off the film’s events. The character is stale, but Benson brings enough light and joy to her scenes that it helps to offset the by-the-numbers performance Milian is giving.
Ultimately, and not surprisingly, this movie is unnecessary, but not without its joys. The dialogue may never get towards any “truths,” but it can be surprisingly witty at times. Plus, the movie’s free.

• From Ashley Benson’s IMDB page, which I just thought was too precious not to include: “Ashley was born two months early weighing 2 pounds 8 oz. She was in ICU for a month. Her parents were told she would need heart surgery on Christmas Day. Prayers were answered when her parents went in Christmas Day and were told by doctors that her heart had closed up. Ashley never needed any surgeries. She was released to go home at 4 1/2 pounds after being hospitalized two months. She has been healthy ever since!.” Awww, she’s like her own Christmas movie.

• There’s something kind of ooky to me about the film’s casual use of the word “slut,” even if it does turn out to be a mostly sex and lady-positive film.