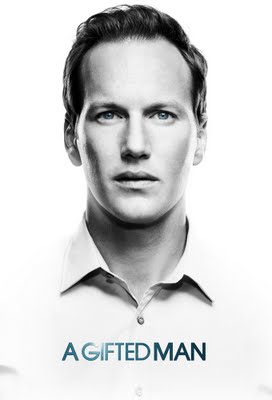 A Gifted Man is not a new show. I mean, it is a new show- a CBS Friday night experiment in unconventional procedural drama- but it adheres to a formula that’s been produced three notable times before. Wonderfalls, Joan of Arcadia and (most similarly) Eli Stone are all what I call “prophet shows”: client/case/patient-of-the-week agnostic faith-based stories of redemption and connection with strong ties to the ether. A Gifted Man is a more dramatic (and less George Michael-full) take on the same thing, though vaguer with the mythology (and God vs. ghost clarification) behind its ethereal messages. Each time I’ve seen a new prophet show I’ve liked it a lot and it’s been canceled quickly. Here’s hoping, as predictable and slightly Ghost Whisperer-y as it might be, A Gifted Man doesn’t suffer the fate of the three great prophet shows.

First let’s talk casting, then we’ll get to the formula.

I’ve always credited my longstanding love of Patrick Wilson to his diverse, challenging and flat out fascinating career choices. The man played the heroic and romantic Raoul in the dismal Phantom movie after taking on the self-destructive, intensely Mormon, closeted Joe in the Angels in America miniseries. He followed that up with the darkly genius Little Children then the cult graphic novel adaptation, Watchmen. He’s done horror movies, action movies, comedies, dramas, musicals- you name it. And he’s done most of it pretty darn well. With that fantastic face capable of conveying great kindness and great coldness in the same moment, Wilson just might be exactly the perfect person for a role like this one at the centre of A Gifted Man. As stoic brain surgeon Michael Holt, Wilson sells the methodical and self-centered genius needed for the premise as well as the underlying humanity necessary for the audience to invest in him.

Julie Benz, always a pleasure, is Michael’s down and out, wonderfully honest sister. She’s the kooky “believer” character that all modern prophet stories need. When science-man Michael starts seeing his ex-wife post-mortem, it’s Christina (Benz) who refers him to the scary guy from the current season of Weeds (aka Pablo Schreiber), here a “man of faith” named Anton Little Creek who will work to provide the only evidence we have that Michael’s more blessed and less crazy.

Jennifer Ehle is the emotional centre of the show as Michael’s recently deceased ex-wife. Having seen her show-stopping performance in Contagion just days ago, I’m on a bit of an Ehle kick right now, remembering all the things I loved about her back in her Lizzy Bennet days. She’s warm, she’s funny, she gives off that indelible air of intelligence that so many actresses lack. As the key ethereal element of this particular prophet show, Ehle has the extra challenge of not being some sort of flashy comedy device- in A Gifted Man the message is more than the medium, so Ehle has to be a superstar to keep the premise from getting boring fast.

There are key components to any prophet show (see also: medium shows, psychic shows and other random ability shows- we’re as yet unsure why Michael is so special or what we’re supposed to call his ability, but I’m going with “prophet” because of the precedent), outlined HERE in my 2008 article about the genre nobody thinks is a genre. And, for the most part, A Gifted Man plays pretty close to the set-upon rules- a recipe for middling critical success and early cancellation, if we’re following past patterns. It combines the tropes of the unlikely hero and the voice of science while the role of the snarky friend is divided between the truth-telling sister (also the faith connection through Anton) and the resentful assistant (the superb Margo Martindale). But it’s all there- the disconnected hero, the agnostic approach to the ethereal, the importance of family, the betterment of man, the only-seen-by-hero messenger, the science vs. faith balance, the weekly “missions”.

The adherence to formula is an annoying feature but all the components are there to execute said formula to well-above-average results. Here’s hoping, because, as Eli Stone taught us, You Gotta Have Faith (a, faitha, faith ah!).